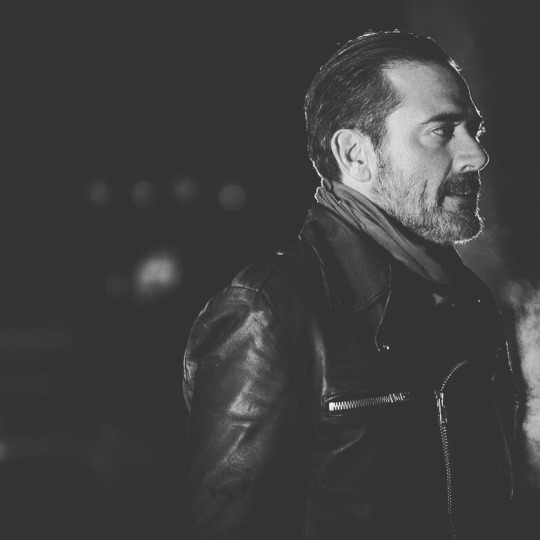 The Walking Dead geared up for one of its biggest finales in history almost a week ago. We were there, millions upon millions of us waiting for the conclusion of the season and the on-screen arrival of Negan. It happened. It happened for a long time. And then it was over. And then Nicole and William hated themselves afterwards. Here’s why. And, of course, ALL OF THE SPOILERS FOR THE SEASON 6 FINALE.

The ending that wasn’t

[divider type=”space_thin”]
William: Let’s just get this shit out the way off the muthafuckin’ top, this was some straight up YouTube comment trollin’ type shit. In the age of Netflix and other streaming services, cliffhangers are going the way of the Reebok pump sneaker anyway. Episode to episode cliffhanger? No problem, let a brotha press play on this joint one time. Season to season cliffhangers are the Leftover’s Guilty Remnant of TV watching. It’s lazy, gotcha programming with the intent of pissing off your fan base. Season finales are for closing loops and maybe, if you’re skilled enough, setting a new status quo for the beginning of next season. This did none of that. During Negan’s bloated (but otherwise great) appearance, we learned nothing we didn’t know or anticipate 5 minutes before that.

Instead, we get to relive the trauma at the beginning of next season when we should be seeing the aftermath front and center. A co-worker asked me who I thought got killed the next day and my honest answer was, “I could give a fuck, Betty.” Walking Dead, y’all do unease, horror, and suspense. Y’all ain’t fuckin’ Clue where it’s Negan in the woods with the spiked bat, but we don’t know the victim. Play to your strengths, yo. What a shitty reward for sitting through an overlong episode. Speaking of which…

[divider type=”space_thin”]
Nicole: So Morgan is uncharacteristically taking a human life and Carol has just been shot – twice – by a dude with no name, no story arc, and no purpose beyond setting up Morgan and Carol as a separate story arc for next season when the local roller derby league lets out. I get that he’ll inevitably be important in season 7, but what was this dude even doing, piloting a polo-derby expo game?

Too many bars, not enough quotables 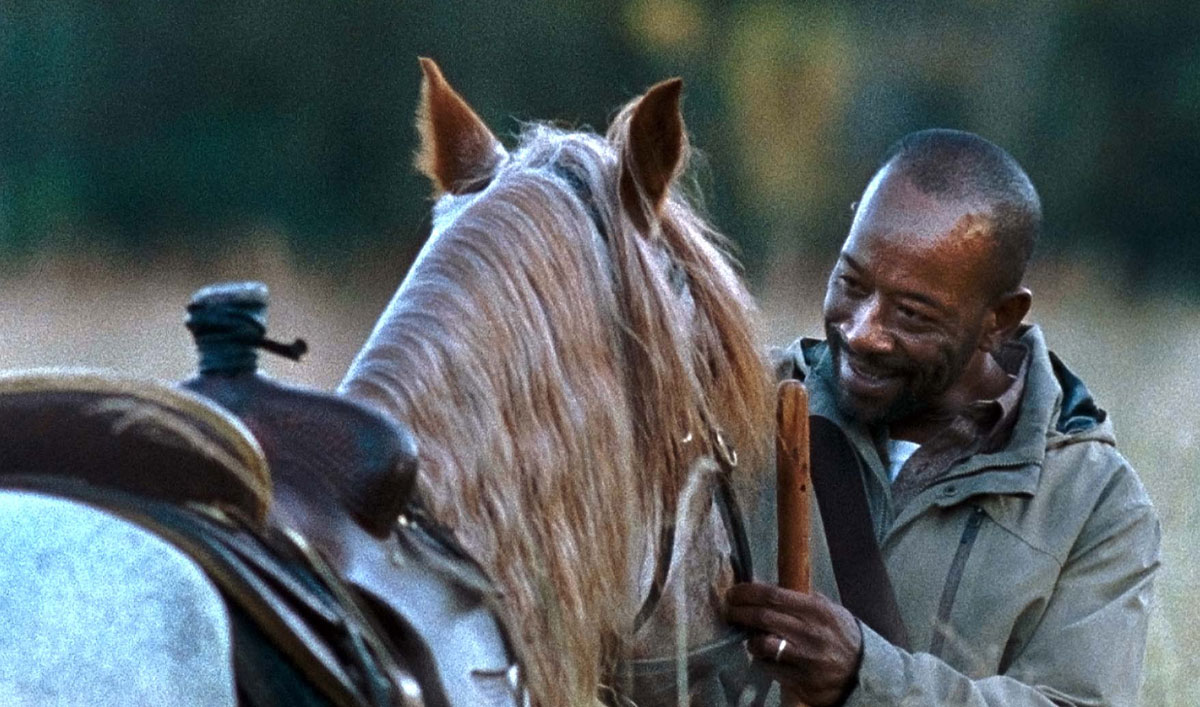 William: No matter how many times you rewatch Talking Dead or watch Chris Hardwick hide his erection over The Walking Dead‘s exposition, nobody can give me a real answer for why this episode was 90 minutes long. Well, an answer that actually relates to the show itself. AMC is known for being notoriously cheap and squeezing every dollar out of its product, hence the reason they sent all their major shows to split season formats in the first place. But I wouldn’t be surprised if this was the highest-rated Walking Dead of all time with the knowledge that Negan was coming, and they cashed in big time.

You add 30 minutes of airtime and an unbalanced amount of commercials and promos and you begin to get the picture as to why we need to watch Morgan ride around on a horse and cut down a zombie from a noose for an extended period of time. Or why it took 5 minutes too long to lock Enid in the closet. Or why we needed to see Rick and his crew get stopped 5 times instead of 3. And if someone tells you that it added to the tension, I’d like to tell you that the shit got so boring to me at one point I went downstairs, grabbed a snack, rewound to see if I missed anything, then got pissed when I hadn’t. Vanilla wafers by the way, fucking delicious.

[divider type=”space_thin”]
Nicole: Carol is having a crisis of faith and is making some kind of trek into the wilderness to commune with her inner pacifist [sigh], sure. Morgan, who I guess feels responsible since he made her complicit in his horrible adopt-a-wolf plan, not only follows her, but saves her? Naw. I don’t buy it. [quote_right]Y’all ain’t fuckin’ Clue where it’s Negan in the woods with the spiked bat, but we don’t know the victim. Play to your strengths, yo.[/quote_right]Carol who had the foresight to dawn a jacket sleeve so that it harbored a gun doesn’t need saving (especially since she seems to be inviting death by laughing at the half-dead dude who just shot her). Carol who previously lived alone after Rick banished her is gonna be okay. Carol who saved all their asses at Terminus is gonna be just fine. This isn’t to say that she can’t fuck up or that she’s immortal, but that sending captain don’t-kill-the-spider-cover-it-with-a-cup-and-put-it-outside to rescue her with the gun Rick essentially forced into his hand feels ham-handed and unbelievable. This felt like watching a preview for the worst buddy movie ever conceived. I keep trying not to think about how all the women are eventually written as damsels in distress who need to be saved from themselves and their uppityness by a dude with a gun and a better idea. Damn, I thought it.

Back to the half-dead dude that shot her…

Dudes that need name-tags or at least a fuckin’ point

William: One of the best games of all time, The Last of Us [spoilers] has an especially great moment when you, in the role of one of the protagonists, meet another group of survivors. While they kind of seem well-meaning at first, through the storytelling, it’s slowly revealed that you are responsible for slaughtering much of their crew earlier in the game and it completely shifts the tone of the conversation at that particular point in the game [end spoiler]. That’s how you handle the wandering hand of vengeance. Not some dude limping through wheat fields with an apparent death wish just so he can kill the woman that killed the men he rolled with who were definitely going to kill said woman. Past the logistical issues that he never ran into Rick when Rick doubled back to Alexandria even though he was following his footsteps or that dude injured himself to the point of dying, but didn’t happen to run into any walkers along the way, the ideological aspect of this was trash too.

Does it make sense for this dude to walk half way across the state of Virginia to kill Carol? Very low plausibility. Would a guy with nothing to lose be driven by vengeance like that? I could see that. Should I give a damn though? Not so much. Not knowing who he was and knowing the laws of TV, there was no way a beloved character like Carol was gonna get merked by a dude whose name we never knew. Not even Omar from The Wire went out like that and his seemingly anonymous death was half the point!

Here lies the legend of the Great Rick Grimes [Part I]

William: One of my favorite non-Negan moments of this D+ episode was the tough talk he was giving back to one of Negan’s lieutenants (“Actually, I was just gonna ask to take everything you have so I wouldn’t have to kill anybody”). But otherwise, this was a terrible episode for Rick. First major flub from Rick: Letting his employees set their own hours. Fam, since when does Rick not actually, like, lead? Here was a sample conversation with Rick while they prepped to get on the road:

Rick: I need you stay here.
Them: But I don’t want to stay here.
Rick: OK.

Bruh, we spent all these years embracing the Ricktatorship so that you Eugene, fuckin’ my go to move is the crotch bite Eugene, told Rick “Naw” like Rosa Parks and that shit flew? We already know this shit is Rick’s fault ultimately because he grossly underestimated the strength of the Saviors, but the fact that Rick knew what was best for these people to not come and was seemingly helpless to stop them was kind of unforgivable.

Nicole: My uterus is actually tapping out SOSs on Sasha’s behalf in morse code when Abraham… (what is the word for what he did?)… proposed. There is so much wrong here. Even if I ignore my shallowest side and don’t wonder about what deep, ancient, and powerful magic this dude has to keep getting beautiful brown women to touch him, even if I ignore that, I still can’t with this awkward “you want some of my baby batter?” talk. They’ve been dating for like two episodes and he tryna get her pregnant.

You just know Abraham was the kind of guy to poke some holes in the condom and call it a proposal in the pre-apocalypse world. And that Sasha doesn’t shut that shit down immediately has me worried. Yes, I acknowledge the sideeye, but her look wasn’t enough. We need a definitive “Is you crazy?” To let us all know that no, this isn’t happening. And his timing! You want to know if Sasha can do what Glenn and Maggie did? Do you see what Maggie is doing? Because it looks mighty similar to miscarrying and/or dying. Now may not be the time to have the family planning talk. [quote_left]Even if I ignore my shallowest side and don’t wonder about what deep, ancient, and powerful magic this dude has to keep getting beautiful brown women to touch him…[/quote_left]William: Look, I know Rick ain’t Batman or Deathstroke, but he can still craft a strategy or is at least paranoid enough to spot a trap. If the survivors have physically stopped you at two junctions already and you arrive at the third obstacle that has nothing but chained up zombies in an elaborate road block that obviously someone took great pains to design, there’s a good chance they didn’t just build the Great Wall of Walker and then walk away.

The fact that Rick didn’t know this shit was an ambush is beyond dumb and took a good aesthetic and concept then turned into a “man trips while walking” gif. To that end, did you get the feeling that the team being ushered into that spot in the woods was something you’ve seen before? Remember the rat maze at Terminus when the cannibals effortlessly led the crew exactly where they wanted to? Naw, me neither, I Men-in-Black-ed that shit out of my mind. There is only a shadow of it left, enough to still shake my head about it 2 seasons later.

Nicole: The entire episode is pretty much the devolution of Rick’s face from arrogant and confident to wide-eyed and about to call his dead wife on the phone. And yes, I read that he was playing a man who had previously always had an answer running out of answers, but blink. Just once, blink. He doesn’t look frustrated, he looks disoriented.

How can we heighten the sagging tension? I know: ketchup.

Nicole: There’s suspense and then there’s the use of out of place “effects.” For example, in the penultimate episode, Daryl gets shot by Dwight in the last seconds and all we see is blood splatter on the screen and Dwight’s voice telling Daryl (we presume) that he’ll live. Not my favorite effect, but useful when used sparingly. So why did the writers use the exact same effect in the finale? You don’t want to reveal who got killed *cough contract negotiations cough* so you reuse an already cheesy effect. Now I’m nostalgic for that crypt keeper level of suspense.