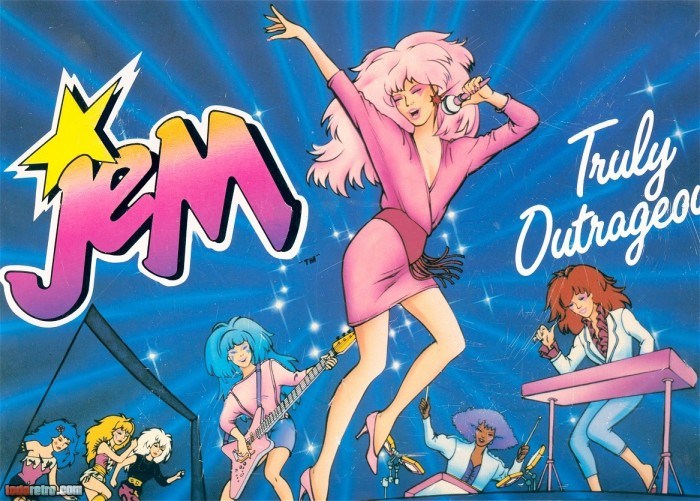 In light of the Jem and the Holograms movie (that was basically set up to be a failure worse than Dragon Ball GT) I have received a vision. Exodia came to me on a cold rainy night and said “Will, you must educate them about Jem and the Holograms.” At first I was thinking I wouldn’t be able to do it. I thought I wasn’t worthy to receive Exodia’s blessing. Not worthy to teach the masses about this show, but I picked myself up and accepted his will. So now here I am, standing before you with glitter in my hair and a truly outrageous laptop in my hands, ready to show you the true beauty of an 80’s cartoon called Jem and the Holograms.

Jem and the Holograms is a show created by Cristy Marx who was also a staff writer for G.I. Joe and Transformers. The animation for a lot of the episodes was done by Toei Animation, which was the animation studio for Saint Seiya and Dragonball. The show was made to be an extremely 80’s show with emphasis on the music and the music videos — each episode has at least 3 songs and 3 music videos to go along with the songs. In true 80’s MTV fashion the music videos were truly outrageous to say the least. And yes, you will see the phrase “truly outrageous” a few times.

So the story of Jem and the Holograms goes a little something like this. Jerrica and Kimber Benton are sisters who live in a foster home for girls called “Starlight House,” and along with their foster sisters Aja and Shana and a few other girls they make one big happy family. Jerrica and Kimber’s father passed away and he left half of the record company Starlight Music and the Starlight House to Jerrica. Starlight House is going through some tough times: no electricity sometimes, bad plumbing, the works.

So Jerrica goes to Starlight music to ask for a loan to help with Starlight House. Here’s where our villain comes in. Eric Raymond, the dude who owns the other half of Starlight Records, says, “HELLLLLLL NAH,” which leads to the Misfits (another band that is coincidentally being managed my Eric Raymond) straight up riding inside the room on guitar-shaped motorcycles and going into the first real song in the show other than the title song. So after Jerrica gets aggressively rocked out by the Misfits she leaves and goes back home to try to think of a way to make money to help the orphanage. While Jerrica and her sisters are thinking, Jerrica puts on some new earrings and a Hologram appears in the room and tells them to go where she leads them. They get to an underground area where a super computer that her Dad made sits, all nice and shiny. The super computer can communicate with Jem and project holograms through her earrings, and there’s also a bunch of instruments in the room, so Jerrica gets an idea: she can use the holograms to disguise her appearance so that she can be Jerrica and create an all new persona named “Jem” and use the new band to get money for the orphanage.

Eric Raymond and the Misfits have rigged a mini band showcase at the park and every band that was invited was picked because they sound terrible compared to the Misfits. The Misfits would easily win and gain some more popularity to help skyrocket them into stardom. Just as the Misfits are about to be announced as winners, Jem and the Holograms start their first song “Only the Beginning.” And it truly was only the beginning.

So the phrase “Jem is truly outrageous” isn’t just a catchy lyric in the song. It literally provides the basis for the entire show. Jem and the Holograms goes from 0 to 9000 faster than you can say Mr. Popo. Jerrica almost gets run over by a bulldozer, a house burns down, and a bomb gets put inside of a house in the first 2 episodes. And in between all of that, the show still finds a way to have songs with music videos for each one. Even the background music is well done in true 80s fashion.

The true beauty of this show is that it’s crazy and doesn’t really have any logic to it, and it knows that. The appeal of this show is its ability to get people lost in the world of the show and to care about the characters and their extremely crazy adventures. There’s more character development than you’d probably think was possible with a show like this, and that just adds to the story and makes it an extremely underrated show in that aspect.

Usually in terms of fictional bands, Jem and the Holograms are forgotten on a lot of lists, which is understandable if you’ve never had Exodia enlighten you on the subject at hand. The fact that this show had 2 different main bands, each with their own different style of music, with a music video for each song was incredible to me. The Misfits had an aggressive style with aggressive rhythms which were made to drive home a point that the song was making or just to make a song that literally just says that the Misfits are bigger and more important than everyone.

While the Misfits were aggressive, Jem and the Holograms style was to use more gentle rhythms usually with a climax of the vocals near the end of the song. “Like a Dream” is a prime example of one of their more gentle songs. In contrast, “Time is Running Out” is a more aggressive song but still has the rhythm of Jem, and her vocals really shine and push through the melody just like how Jem and the Holograms themselves push through all the tough times and drama they have to endure.

The show was a hit or miss for most but if it did hit the right spots for you then you really found a hidden gem in terms of entertainment and cartoons (pun definitely intended). The show ran for 3 seasons before it “ended” rather abruptly, but the story was full and fleshed out with drama and goofy 80s magic and another band member joins Jem and the Holograms later on and another band called “The Stingers” even hit the scene. Even though this show ended way before I was born I still consider this show one of my favorite shows in terms of music, nostalgia and just all around craziness. This show will forever make me wish that there was a true live-action Jem movie complete with all the wacky drama and bangin’ 80s beats, but as of right now I don’t think we’ll ever get that, which is a real shame.

The beauty of Jem and the Holograms is already in its name in plain view. “Jem”  is a true gem of the 80s, a true diamond in the rough, a truly outrageous adventure from start to finish that everyone can take part in.

P.S. This is a live action Jem tribute was done by a YouTuber named Kota Wade (who was also on the voice last season) so shout outs to her for making a nice live action Jem tribute even though it was painfully short and I wish there was more to it. Shit, give her money to make a full movie. The IDW Jem comic book is also a very good representation of Jem, so check that out too so you can get the full Jem experience. Thus ends our outrageous adventure I hope that at least a few of you will continue the adventure and watch the Jem and the Holograms T.V. show so it can never be forgotten and live on as a true, pure, 80s musical wacky drama that it is.