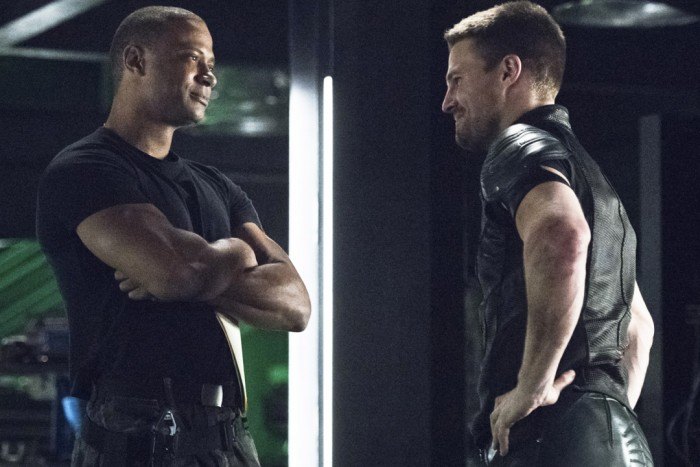 And you say Star City!

We open up with a classic case of thugs chasing down an armored truck. This was a classic Arrow episode filled with some good action, drama and DEM BOWS. Let’s jump right into it. The thugs force homie off the road and attack. From the heavens, rains a window breaking, eardrum puncturing, soul dampening Canary Cry that takes out the first slew of Ghosts. Green Arrow and Speedy roll up on their red and green Mighty Morphin Battle Bikes, dodge rounds of bullets spraying, then find cover. The Ghosts aint here to test the squad’s gangsta though. They toss a grenade in the back of the truck and all the cash inside goes up in flames.

Money to Blow, Time to Kill

They return to Arrow lair and all keep making lame jokes asking themselves, burn the money…why? Oliver suggests that Felicity makes herself useful and get Ray to analze that euthanasia cyanide tooth they got a few eps back. The squad begins to head out and Dig is like, “Yooo Ollie, bro, dawg, fam, I got some shit I need to show you. Anvil heavy type shit. Iiiight?” Dig gives Ollie the file on his crime lord brother, Andy, that he got from Lance. Dig is ready to cast his brother off but Ollie reasons with him on some, “It’s easy to assume. I’ve been there. Better to give him the benefit of the doubt.”

Ray begins to decipher the deteriorating code on the killer tooth as Felicity picks his brain about his decision to stay “dead” instead of returning to the real world, then figures out there’s a patent on it by Wolfman Tech.

Campaign HQ: The campaign manager, Alex Davis, suggests that Ollie attend the Police Department Awards Gala (PDA) and take a nice easy campaign route but he about that easy story mode shit. He wants the bay. Thea and Ollie move out after he interrupts the new campaign boo and Thea discussing the possibility of them being caught by Ollie. Thea like, “Pssshhtttt zero fucks given by this OG. He ain’t the boss of me” Boo thang is like, “But he’s my boss. *Sad face emoji*”

Am I My Brothers Keeper?

Green Arrow up on the roof with the city backdrop looking like a God amongst men. He tells the team it’s time. They move out into the facility. Canary snags whatever it is they need and is nearly murked out by a Ghost but Dig got that new Black Ops 3 and sends a few shots into his rib cage and saves her. She bounces and Dig goes in for the big unmasking. Dun Dun DUN!! It’s his brother. Andy regains consciousness then flawlessly transitions into a UFC leg takedown, flips up to his feet and is outieee.

On the Mariana’s Trench low low, Thea is still getting calls from Malcolm!! After a few FU buttons, she finally answers the phone and asks why he’s calling..then the new Ra’s Al Ghul suddenly appears in her apt!!
Sidebar: Can we just address the fact that this is some normal ass breaking and entering protocol for characters on this show. ESPECIALLY Thea’s crib. Seems to me that cats got the Varys Red Keep blueprints on the entire Starling City in their back pocket for whenever it’s time to call up Dane Cook and pull a BnE. Remember a few weeks back when Sara was on her rampage and straight up mystically appeared in Thea’s crib which set up that surprisingly proper in-house battle? Yea, homegirl needs to get the Sloman Shield, an attack dog or something!

Anyhow, Malcolm comes to her with a peace offering. He knows her last couple of deaths must be wearing off and the lust is growing. He provides her with the name and location of a despicable pedophile she can rid the world of. She’s disgusted that he would suggest such a thing. We all know she know she need that new notch though!

Dig and the crew back at the lair trying to figure out how his brother is still alive, evil, and working for H.I.V.E.

Darhk and Lance meet up and Damien accuses Quentin of setting him up. He gets mad cryptic and creeptastic. Lance aint shook tho.

Welcome To The Darhk Side

The Star City PDA Gala got all the bosses and CEOs up in there looking dapper. Mr. Queen gives a nice speech then discuss Green business in plain sight. Lance tells him he saw something on Darhk’s desk. Something that said Slip 52 down at the docks. Meanwhile, Laurel tryna’ level with Dig on some, “My sibling came back from the dead too.” shit. Dig tears up but still wasn’t hearing none of that noise. It coming from Laurel didn’t help. TO him, Andy is a Ghost and dead to Diggle.

Out of fuckin NOOOwhere Damien Darhk hits Oliver with this, “Let me financially support your campaign.” shit. He basically tells Ollie he wants to work together and not working together is what doomed Jessica Danforth’s plans to become mayor. Also, that he better leave the bay the way it is or they gone have some problems. Might even have to throw the fair ones if it comes down to it.

Felicity up in the lair ripping Oliver Queen a new one for getting bodied into partnering up with the Darhk one. He says Lance lost his trust with Darhk so he’s moving in to get that insider trader info. She reminds him of his promise to the city. To give them hope.

Thea out at the bar with Alex, her new campaign boo. He goes to take a call and she gets hit on while alone. She tries to tell due to kick rocks, but he persisted and she got the urge to throw his beer belly ass thru the door of a glass soda cooler and beat the snot out that boy!! She urges him to bear with her while she deals with some thangs. Maaaannnn, I woulda been OUT like a thief in the night.

Dig up in the crib confiding in the wife, when Ollie stops by. He reveals the Slip 52 Dock info and Dig is down, but only on some Batman and Robin ish, Thea and Laurel gotta take a seat tonight! They creep up on some roof (this show loves the roof creep) while Darhk up on the docks giving his new members the mind control pill speech. The guys get discovered and shots come flying at their faces. Baby Dig out here looking evil as hell commanding the Ghosts to “Kill the green one.” The dockside destruction begins. The boys are doin the LAWD’S work out here by the bay. Diggle showing off some rarely seen Sunny from Into The Badlands type martial arts skills (Yup! Already dropping ITB references… it’s THAT dope). Ollie eventually gets hit with a grenade and is blasted into probably should’ve died oblivion. Dig swoops in to scoop him up and get him back to headquarters.

Lair: Ollie is catching up on his CW shirt-off quota while getting patched up by Felicity. The squad debates again. Dig aint about that automatic pass for the family shit. He doesn’t want to keep going after them just because its his bro. Ollie needs to know that people can come back from the dark side. Dig eventually agrees to expose Darhk in broad daylight. This should be interesting…

Palmer Tech: Felicity keeps reminding Ray that he needs to finally tell the world he’s alive and well. He’s been researching everything thats been happening and is disappointed in what he would return to. Fair.
He tells her the fake tooth has a high concentration of sodium fluoride in it and figured out that a facility was closed down for having high levels of this shit all up in the water, ages ago. Turns out, Darhk been hiding his guys in a rustic old looney bin.

Lair: The gang debates going in to save Andy from the Looney H.I.V.E. Lair. Laurel backs Oliver’s point of doing everything they can to bring his brother back. Thea was a straight up G wit it. She tells him that this decision is bigger than just him. Dig is like, “Dam, outmuscled by the cast of Three’s Company. Lets suit the fuck up.”

When I say that these cats are out here flying through the streets I’m talking, flying over roof after roof looking like leathered up sugar gliders. They got the new infrared visual recognition tech swag from Curtis so they can detect Andy over the other Ghosts.

Thea and Laurel are quickly spotted and they start whopping hella Ghost ass. Thea winds up battling Andy and homeboy got some skills. The fight alllll around, up and down every inch of this old psych ward: In the hallways, up a couple flights on the elevator, next to a holding cell and she finally subdues him and asks for backup to carry Andy’s ass out after that epic fist to cuffs duel that just went down.

THEN out of nowhere again!! Darhk rolls up and is about to choke slam Thea but something goes awry and his powers don’t work. His face gets a little Joffrey purple wedding-ish and as he writhes in pain, Thea gets the hell out of dodge.

Out on the roof, Ollie putting triple double digits on the board as Atom flies in to hit a few Ghosts with some Robocop haymakers. Dig is nowhere to be seen until he pops up on the scene, wastes a few lives and reveals that he came to save his brother.. The green one.

Thea invites Malcolm over and admits that she has been thinking about his advice, but won’t take it. She wants to use Damien Darhk to make her blood lust dissipate.

Dig goes to talk to the imprisoned Andy. He wants to know the truth. He throws the file at him for Andy to read. He tells his brother that its all true. “Im a bad motha..”

The campaign team is out in press conference form in front of the bay. He announces to Darhk and the rest of the citizens that he will not stop fighting for the city. Darhk in the crowd lookin PISSEDDD.

Flashback: Queen brings Conklin to the head torturer, Baron Reiter, after he figures out that he was set up on that riverside attack. Reiter breaks out some crazy lie detector magic and it reveals that Conklin was lying his ass off so Reiter allows the wronged Queen to get his revenge. He does so in the literal ass and back whipping that Queen has the pleasure of delivering. After finding out that Vlad, the guy he had to kill in the river, was the brother of Taiana, the girl in the cave, he decides to break the news to her. She was devastated. Oliver wash’t real enough to admit he killed him. Instead, he let her believe that it was Conklin. Is this the integrity Starling City wants to see in a mayor?! At least the flashbacks are getting better..