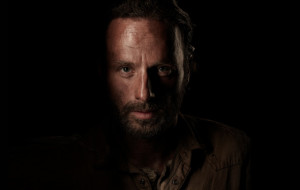 Spoilers ahead through the season finale

Let’s start with the good: The tapestry that is Walking Dead is superb. While watching the show, we never feel like we aren’t living in that world with them. Sometimes the CGI isn’t the top of the pyramid, but it’s usually pretty passable, the world feels not only lived in, but destroyed and lived in again.

Another strong point is the plot that Robert Kirkman has created. The concept of morality, that the undead aren’t as a big of a threat as the living is a fascinating (if not frequently trampled) dystopian landscape. The varying factions and different ways that people learn to deal with the end of the world is amazing stuff to sculpt and definitely shows up in the shows stronger episodes.

But The Walking Dead is a case study in how plot and story could not be more different. I went from hardcore, appoint TV viewer of the Walking Dead to casual, I’ll catch it on the DVR by Wednesday viewer by the end of season 2. I checked out of that level of fandom. It occurred to me that the flaws of the show were no longer shielded or veiled behind the awesome premise, and maybe it’s because I got comfortable enough in the world the created to begin judging it (which is props to the show by the way).

The method of storytelling is a good place to start my bitch session as if it was consistently done well, most of the other sins of the show wouldn’t be as apparent. Everyone should be aware now that Walking Dead is on its 3rd Showrunner, so I suppose it is understandable that the tonality and pace of the show has been more six flags than landmark TV, but that would also be excusing AMC from the pitfalls of this show (and I’m definitely not, more on them later). Season 4, which just finished up, has been billed as a redo for last season, which, I’m guessing in most languages, isn’t a good thing. My issue with the second season is that it fell into too many typical network TV tropes: characters quickly changing from what we’ve known for the sake of conflict, irrational decisions made to heighten drama and trying to keep a secret that wasn’t really a secret (I didn’t think Walking Dead would have the balls to leave Sophia out in the wild and haunt the audience, so she had to be coming out of that damn barn). Waking Dead was particularly horrible with female characters during that (and the next) season. Lori and Andrea were just poorly, poorly developed characters that were also a source of contempt and conflict for the other characters, never the refuge or savior (granted 80% of TV shows have this same problem with women characters…cuz…they’re usually written…by men…a different column, anyways…). I was back on board to some degree, with season 3 (the time jump could not be more beneficial) to find the Fighting Ricks were now road warrior mercenaries and the show was pretty damn enthralling with their taking of the prison. But then, a cartoon character that was supposed to be portraying the Governor showed up and the show hasn’t really been right since.

Which brings me to the next complaint about the Walking Dead. Name me another show, with average to good ratings (and Walking Dead’s qualify as great)with acting this bad. I mean, its ROOOOUUUUUGGGGHHHHH. Which isn’t to say that there hasn’t been good acting and actors on the show. But the status quo is less than par. Rick Grimes, portrayed by actor Andrew Lincoln has a tough job, no doubt. He’s supposed to be the moral center of a show that by nature is constantly asking you to re-calibrate your morality for this no hope world. But try as he might, Lincoln ain’t getting his SAG membership comped any time soon.

He’s usually best when sharing the screen with a really good actor, of course the problem there is…who the hell is that supposed to be? Nuance and range define how TV characters stand out. When you’re Breaking Bad, you do it with both writing and acting. Some shows can only pull off one, or are middling at both of them. But Walking Dead’s problem is it tries to write nuance (again, not great at it) while the characters for the most part have one mode. Daryl = moody, no bullshitting. Beth = Hopeful, glitter girl. Maggie = determined, unshakable. Carol = hardened, uncompromising. Glenn = see the male, Asian-American version of Maggie. Tyrese spends a lot of time wringing his hand and being on the verge of walking into a crowd of Walkers. The couple of characters that are asked for nuance and complexity aren’t always up to the task. Look, I will never leave my wife, but if Danai Gurira tried to steal me away, I might give it 5 minutes of hard deliberation.

But I still can’t give her the benefit of the doubt in her scenes as Michonne either. Maybe it’s not necessarily her fault, as the writer’s started her as a mute and turned her into a talk show host in one season’s time. I do appreciate the levity they attempt with her, that she actually is a fun and comical person when she’s not beheading 40 zombies in 3 minutes, but the switch back to serious monologues with Carl are harsh and sometimes comical for all the wrong reasons. When you go back and see an episode like Season 3’s safe that starred the superb Lennie James (at the Evans compound we pretend Low Winter Sun never existed, so he can’t be penalized for that), it’s easy to fall in love with what this show could be because a great performance deepens the world. But most of the time, it’s just Rick giving pregnant pauses to Carl about responsibility. And there’s no excuse for this, you got The Wire alums on the set, b. Let them cats stretch their legs a little bit. My last bit about the acting…Carl is terrible yo. I feel bad for the kid, cuz he’s overmatched for this. His “emotional” scenes bring me shades of AJ Soprano during the second half of the Sopranos run. I have theories about this, which I’ll get to in a minute.

All my frustrations came to a head in the season finale, “A.” The scene where the road men catch up to Rick and crew? Great stuff. The fight, the resolution, all great, all on board for that. The flashbacks fell flat to me. We been done with Herschel man. And nobody cared about Rick the farmer. How are we this many episodes in and still doing the “what kind of man is Rick gonna be” act? Missed me with that. By the time we got to Terminus and the Fighting Ricks were being chased through the maze with positioned gunfire while nobody could tell what was happening, I was out. You can’t sell me on the survival skills and instincts of these people for four seasons and then tell me they can’t figure out they’re being hearded like obedient cattle for as scene that felt like it took thirty minutes in real time. If Rick thinks the people of Terminus don’t know who they’re messing with, then maybe that’s because everything they’ve been shown so far is that you’re lucky to be alive and gotten this far.

My last issue with the show influences everything else. AMC is notoriously cheap. And it shows. It shows in them not securing at least one bonafide star for this show. It’s shows in the ensemble casting. It shows in the structure of how the show is released, in that it feels like Walking Dead is ALWAYS on with this 8 and 8 format (the same format that has led to Mad Men being on for another year after this season airs). AMC is fine with the quality or lack thereof because they’ve found a win button for the general audience that enjoys watching the slaughter of zombies and doesn’t have to think to much about it (as an aside, zombies might be number two behind Nazis that the general public is 100% ok with you slaughtering, which satisfies our bloodlust or want for carnage without feeling bad about it…we should probably get ourselves checked). But this means that the fundamental issues with the show will never improve because they aren’t worried about improving the product, just about maintaining the customers they got because their market share is so large (yes, I went drug talk on you for a second). The difference between a show like Game of Thrones or Breaking Bad is that they started at “who do we need to make this a great show” compared to, what bare minimums can we get away with as long as we show at least 12 zombie domes crushed per episode.” Look at the teen (and now young adult) actors on Thrones. Could Chandler Riggs (Carl) play even ONE of those roles?

If the Wire Season 4 had just one performance as weak as Riggs in its rotation, that wouldn’t be one of the best seasons that TV has ever had. But the expectations are lower for Walking Dead, simply, because they can afford to be.

Like I said, the Walking Dead isn’t terrible TV. It just has possibly a higher ceiling than almost any show on TV (outside of Thrones) but doesn’t nearly capitalize on the potential. Primarily because they are in resource management mode more than the how can this be great TV mode.