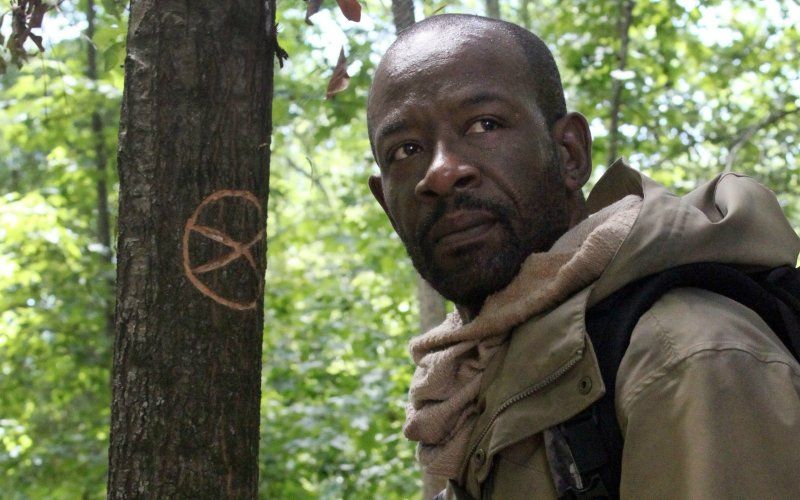 **If you want or need a refresher on previous seasons of The Walking Dead, check out these great animated recaps.****

Given that I spent Sunday night watching Wrestlemania 31, I missed out on the season 5 finale of AMC’s The Walking Dead. Avoiding spoilers all day reminded me of the episode of How I Met Your Mother where everyone tried to avoid finding out the final results of the Superbowl. Well, I made it.

The final episode of season 5 is entitled “Conquer” and was a whopping hour and a half (with commercials) instead of the usual hour. And for good reason, there was a lot of ground to cover.

The episode started off with Morgan, the first person Rick met way back in season one, sitting alone in the woods. Then a man with a “W” carved into his forehead approaches him with a pistol. The man lets Morgan know he intends to take everything from him, including his life. Just then, an accomplice of the man that approached Morgan rushes to attack him out of the bushes, but Morgan reveals that he’s deadly with a broomstick and disarms both of them, then leaves them tied up in a car.

Back in Alexandria, Rick wakes up with his face covered in bandages to the sight of Michonne watching over him. He’s told that Jessie and Pete have been put in separate houses and that there’s going to be a meeting held that night concerning his future in Alexandria. He then decides, that if need be, he and his people will take it by force. Rick leaves and visits Jessie, who thanks him. When he returns, he confesses to Michonne that Carol stole guns for herself, him and Daryl. He explains that he didn’t tell Mihconne because he wasn’t sure where her allegiances were, to which Michonne explains that she’ll be by his side no matter what.

Maggie goes and tries to convince Deanna to cancel the meeting, but fails. She then decides to talk to as many people as possible in the mean time.

Carol goes off to visit Pete and offer him a pot of food but threatens him with a knife after he become defensive. She explains to him that she could easily kill him and play it off as if it were self-defense. As she leaves, Pete goes into a fit of rage.

Miles away from the community, Aaron and Daryl are off looking for new recruits. They catch a glance of a man in a red poncho and follow him to find out more. After a while, they lose him but come across a grocery store with trucks parked out back. In their excitement, they open one of the trucks only to find that it’s full of walkers, as are all of the others, and it was a trap. The two climb into a nearby car for shelter before deciding to fight their way to the gate.

Just before opening the door, Morgan comes to their rescue and the three fight their way to safety. Out of gratitude, Aaron invites Morgan back to Alexandria, but he refuses and reveals that he’s looking for none other than Rick Grimes.

Dealing with the aftermath of their last run where Noah dies, Nicholas looks to get revenge on Glenn and also attempts to tie up a major loose end. Knowing that Glenn would see and follow him, Nicholas headed over the wall and into the woods. After following him through the woods, Glenn is shot by Nicholas. Nicholas now chases Glenn, but is taken by surprised and the two start to fight. A group of walkers comes up and Nicholas runs off, leaving Glenn to fight for his life. As he heads back to Alexandria, Nicholas is knocked down again by Glenn, who gets a gun and holds it to Nicholas’ head. He explains to him that Noah’s death is his fault, but he can’t bring himself to pull the trigger.

Earlier that day, Father Gabriel left Alexandria for what ended up being an attempted suicide mission. After finding a walker, he changes his mind at the last minute and kills it instead of sacrificing himself. He walks back to Alexandria, completely distraught, and leaves the gate open behind him. Sasha, who has also been dealing with emotional stress lately, waits for him at the garage-turned-church where they have a confrontation about the group’s past actions and transgressions. After a struggle, Sasha holds Gabriel at gunpoint before Maggie walks in and puts an end to the fight. 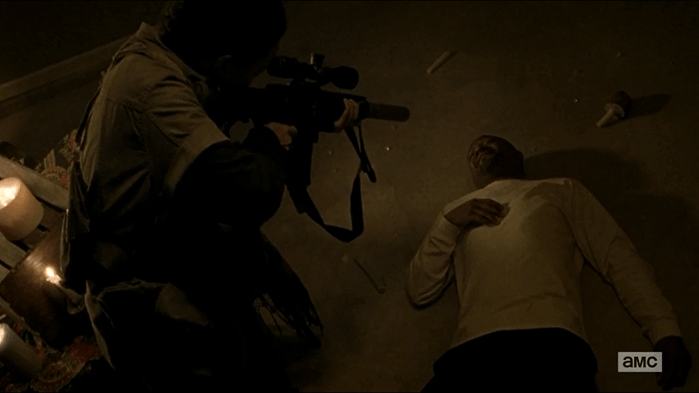 While the meeting on his future takes place, Rick realizes that the front gate is open and sees that walkers have made their way inside. He finds three walkers behind houses and fights to kill all three of them, ending up covered in their blood in the process. As the group debates Rick’s fate, he walks up to them and shows them the body of one of the walkers, explaining that they’re far from truly safe. In the middle of his speech, Pete walks up to the group with Michonne’s sword in an attempt to kill Rick. Reg, Deanna’s husband and the builder of the walls that protect Alexandria, steps in the middle and has his neck accidentally sliced open by Pete. In grief, Deanna gives Rick the order to kills Pete, which he does, just as Daryl, Aaron and Morgan approach.

Back at the grocery store, the two Wolves we met earlier walk the man in the red poncho that Aaron and Daryl had seen earlier. They slit his throat and lure all of the walkers back into their trailers with the use of music.