The exciting season premiere of The Walking Dead focused on a group of the survivors, led by Rick, as they tried to guide a herd of walkers away from the area like rotting sheep. After “dealing” with a problem that could’ve ruined everything – Rick killing Carter after he gets his face bitten off and screams for his life like anyone would – the plan appeared to be nearly ruined again when the sound of an airhorn is heard coming from the direction of Alexandria. Episode 2, entitled “JSS,” tells the story of what happened back in Alexandria during that time.

The episode opens up showing how Enid got to Alexandria. We first meet her with two adults – presumably her parents, but you never really know anymore – who were attacked off-screen by walkers while trying to hot-wire a car. From the safety of the car, with the walkers feasting on her parents outside, she traced the letters “JSS” onto the dirty window with her finger. We then see flashes of her on the road alone where she kills a walker to take sanctuary in the car it was crawling out of, eating a (raw) turtle with no fucks given at all and walking into Alexandria after initially hesitating. After doing all of these, she wrote down those same three letters. What do they mean? No clue yet.

In present day, we see everyone that didn’t go to help with the walker-herding living a somewhat normal life. Carol gets complimented on her cooking talents. Gabriel comes to Carl and says he’s finally ready to learn how to defend himself. Sadly, Carl didn’t take a page from his dad’s book and hit him with the “Um.. how about now?” Instead, he tells him to come by around 3 o’clock for some machete lessons. 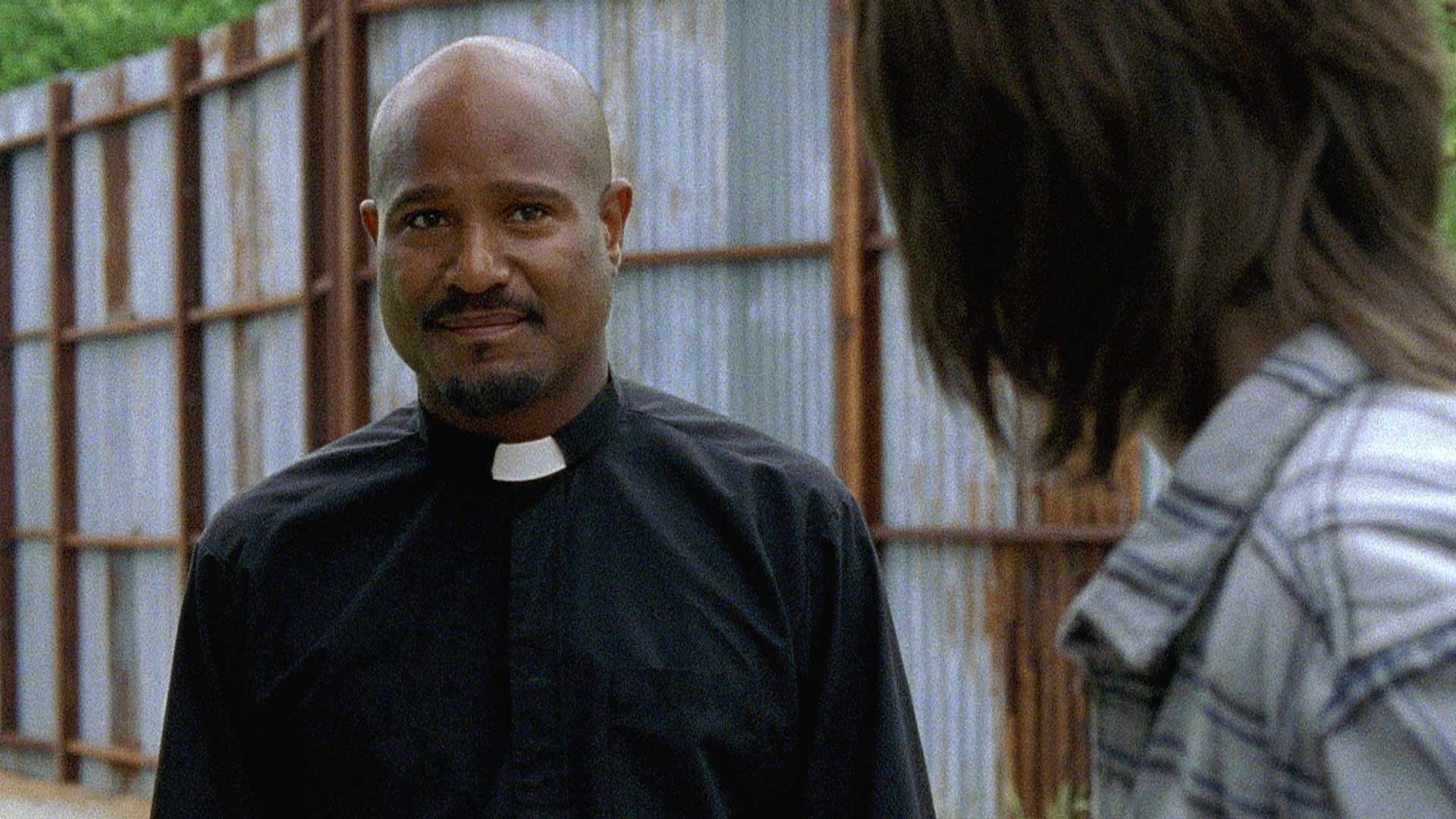 Denise, expresses her doubts to Tara and Eugene about how she’s now the town’s new doctor, by default, because she went to medical school that one time. That would usually be good enough, except she backed out of her plan to become a surgeon due to anxiety and panic attacks and became a psychiatrist instead. While she specialized in mental health, which everyone desperately needs to get checked right now, she isn’t the most qualified to treat physical wounds.

Then, as Carol is cooking and looking out of her window, she sees a neighbor smoking a cigarette outside of her house. Suddenly, a large, dirty man runs by, way faster than he should be able to, and cuts her down with a machete and Carol quickly runs upstairs to warn Carl, who saw from his window.

Outside of the walls, Maggie and Deanna see someone that was assigned to watch the wall get hit with a molotov cocktail and fall to his fiery doom as someone from the outside climbs in. Suddenly, Alexandria is overrun with maniacs that are killing everyone that they can find. Some have W’s carved into their foreheads and others draw one on with the blood of their victims. Yep, it’s the Wolves!

Up in the bell tower, Deanna’s son Spencer is watching the chaos ensue through the scope of his rifle. He tries to take a couple out, but he’s a horrible shot. Luckily, he sees a truck coming from down the road and kills the driver, which sends the truck straight into a wall and causes the driver to press the air horn – the same horn we heard at the end of the last episode.

As he goes down to turn off the sound, Spencer sees that the driver has already turned into a walker. After hesitating to kill it, Morgan shows up to save the day and kills the walker with his staff. Spencer meets up with Deanna and Maggie, who tries to convince them to come inside to fight. But Deanna quickly reminds her that she isn’t good for anything in a fight and elects to stay in the truck with her son’s protection. 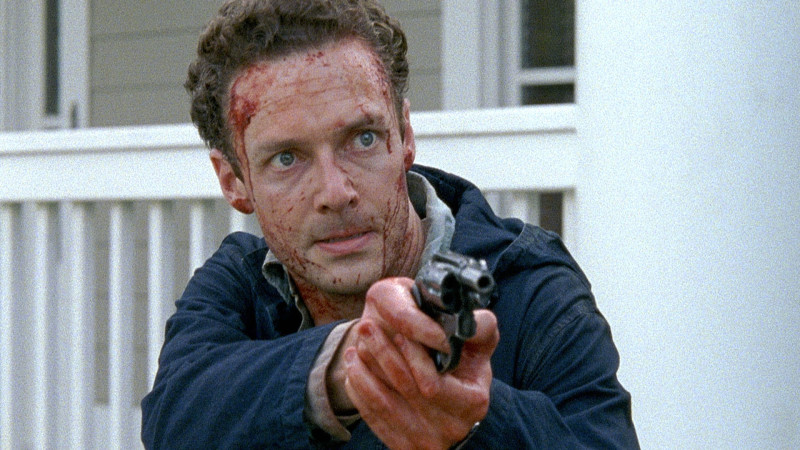 Meanwhile, Tara and Eugene bring in an injured woman to Denise to help. When Denise realized that the woman named Holly is dying as a result of blood loss from a cut artery, she almost lets her doubts stop her from even trying to save her life. Because, you know, that’s totally what doctors do.  After getting a reality from Tara and “don’t be like me” Eugene, she sacks up and does what she can to save Holly’s life. After trying to bring her back, Holly’s heart rate drops. As Tara tries to console her, Denise sends everyone away. After being a little hurt, Tara throws some shade and reminds Denise to take care of Holly’s brain.

Carl is back protecting his home with an assault rifle that’s half his size when Enid walks in. She plans to leave, but he convinces her to help protect Judith. In the attack, Ron, who’s dealing with emotions of his own after his abusive father gets shot in the head, is hiding behind a tree when he looks over his shoulder and sees one of the Wolves standing behind him a ninja warrior pose from your favorite anime. As Ron makes a run for it, the man starts to catch up to him when he suddenly falls after being shot by Carl from the house. The man turns on the water works and pleads with Carl to help him but lunges for his legs as soon as he’s close enough. Carl shoots him dead on the spot after a struggle.

Ron, who apparently has feelings for Enid, sees her walk out of Carl’s house and rejects his offer for protection. Who would’ve thought the first love triangle on The Walking Dead would be a bunch of teenagers? I’m not counting Michonne, Andrea and The Governor because it was never confirmed that “Micchondrea” was actually a thing.

Throughout the rest of the attack, Carol goes undercover as one of the Wolves with Morgan. After seeing Gabriel being attacked, Morgan comes to his rescue just after Gabriel finally fought someone off. Carol shoots a few of the Wolves but runs out of ammo and leads them to the armory to get more. She shoots the two that followed her, but one of them is apparently so hopped up on adrenaline and insanity that he keeps running full-speed like he didn’t just take two bullets to the gut. Carol finds Lydia in the closet and tells her to shoot anyone that walks through the door to the armory.

Back at her house, Jessie hides in the caller with her youngest son and the gun she flashed at Rick in the latest episode. She my locks the door and tells her son to lock it behind her, which he doesn’t. Jessie suddenly yells out “Ron, stay outside!” and is aggaxked from behind by a women that was waiting in her home. The two struggle and after Jessie fakes going unconsciousc she grabs a pair of scissors she used to cut hair and stabs the it rider in the chest several times. Of course, that’s exactly when Ron walks in.

Gabriel asks Morgan how he learned to handle a staff and he responds with a little more detail than he gave Rick with “a cheesemaker.” Did Morgan meed a Packers fan that doubled as an assassin? Hopefully we’ll find out. As a man they held captive starts to rattle on about how things aren’t natural and no one’s safe, Carol walks by with a “WE TAKE NO PRISONERS!” mentality and shoots him in the head, mid-sentence. Morgan walks off and is surrounded by five members of the Wolves. He fights off four of them, urging them to leave because his people have guns, and they obviously don’t. A knock-off Vic Mensa looking dude reminds him that they didn’t choose this lifestyle and grabs a gun he found on the ground (yes, like in GTA) and runs off.

Now that the attack’s over, everyone walks the perimeter and area to see if there are anymore threats.Carl looks for Enid, but finds only a piece of paper that reads “just survive somehow,” which must be what “JSS” stands for. Rosita and Spencer kill the extra crispy walker that got hit with the cocktail and Morgan kills one that was walking around. As Morgan checks a house, he’s confronted by the same member of the Wolves he came across in the woods and left stranded in a car. The man realizes that Morgan can’t kill him and tells him that he should’ve. Did they somehow follow Morgan to Alexandria? We’ll never know.  Morgan wins the fight and delivers a finishing blow to the man. Whether or not he’s alive is something we’ll have to wait and see. The final scene if when Carol and Morgan walk past each other from opposite sides of the street. Possibly symbolizing their different ideologies and future conflict that will come from them.