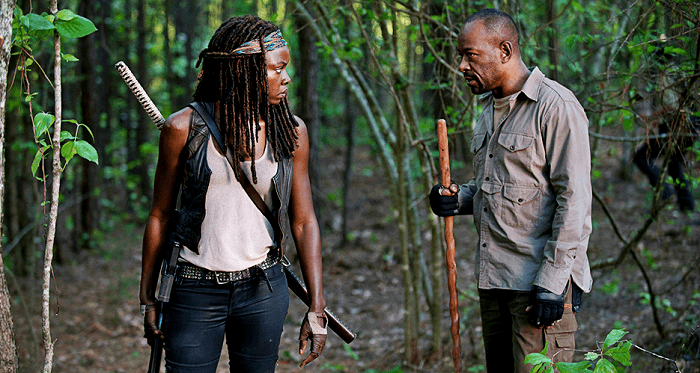 It’s that time of year again, folks. This past Sunday marked the start of another season of The Walking Dead – notice the absence of the word “Fear.” In case you weren’t one of the 20+ million people tuning in, here’s your recap. This episode was an hour and a half, so don’t be surprised if it’s longer than usual.

This season starts off with a flashback to Rick shooting Pete, then heads to a cold open, showing Rick and the residents of Alexandria – including some that we haven’t officially met yet – standing in a quarry going over a plan on how to deal with what appears to be a couple thousand walkers. Apparently this was supposed to be a “dry run,” but things quickly went to sh*t like they tend to in The Walking Dead. To attract the walkers in their direction, they let off some flares and lead them to who knows where.

In another flashback, we see the aftermath of Pete and Reg’s deaths. Deanna tells Gabriel that he was wrong with his paranoia about the group. Abraham takes it upon himself to carry the bodies to a grave-site and pours out some liquor for his dead homie, but drinks way more than he pours. Glenn brings Nicholas back to the infirmary – surprisingly not dead. To lighten up the mood, Tara tells Eugene she’s glad nothing happened to his epic mullet.

Meanwhile, Morgan is back with Rick and Daryl and tries to have the emotional reunion that he probably pictured for months, but this is the worst timing possible. Rick’s still covered in blood and has to tell him they’ll talk in the morning.

When the next morning comes, Rick and Daryl have a talk on the street like they’re two suburbanites without a care in the world and Rick tells him that there are going to be some changes. For example, they’re not going to go looking for new people anymore so they can take care of themselves.  Rick talks to Morgan and we finally find out where he learned how to yield a broom handle like a Jedi knight – “a friend.”

In non-black-and-white present day, everyone appears to be doing their pre-assigned jobs to do something with this massive herd of walkers.

Funny moment: Michonne, Morgan and Rick stand by a fence blocked off by cars and the old RV. Suddenly, Morgan asks Michonne if she ate his last peanut butter protein bar [insert side-eye].

Glenn, Heath and Nicholas start their part of the plan and come across a department store that has another massive herd of walkers inside. Their plan is to let a couple out at a time and kill them slowly so that they can quiet things down and not distract the herd Daryl’s leading out.

Yeah… Heath is most likely on your side; that doesn’t sound like the best plan. But Glenn reminds him that he’s supposed to be a pizza delivery guy, but when the world changed, so did he. As they open the door, they see that it’s blocked off and have to come up with another plan.

Back in the flashback, Heath (DR. DRE!) pulls up to the gate with a team of runners and a horrible wig and tells a cautious Eugene that they’ve been gone a couple weeks and need to be let in. This is when we also meet Scott and Amy. Heath asks Eugene if anything big has happened since he’s been gone and he tells him that he should probably talk to Deanna. Then Eugene stops him as he walks away and says that it’s nice to see someone “like me,” referring to their unique hairstyles, not both being incredibly awkward liars.

While on a walk through Alexandria with Morgan, Rick stumbles across Gabriel and Carter digging graves for Reg and Pete. Rick tries to stop them from digging a grave for Pete because he was a total scumbag that beat his family and he feels he shouldn’t be buried on their land. Deanna comes in and agrees, instructing them to take the body out of the community while Pete’s son Ron overhears. While they put the body in the trunk, Rick tries to explain what happened to Morgan with his hypocritical “we don’t kill” mentality.

While Rick and Morgan are out to bury Pete’s body, they hear a noise off in the distance. As they go to investigate, they see the same quarry full of walkers that we saw in the opening scene. They hear Ron running through the woods being chased by a group of walkers. Rick suddenly becomes an NFL middle linebacker and tackles Ron out of the way as the walkers walk over the edge of a cliff. They investigate further and find that they the walkers were trapped there by trucks, but there’s still room for one or two to squeeze through at a time. The three head back to where they were burying Pete, which is incredibly awkward because now Ron’s with them, who Rick just treated like his son for being out alone.

Back in Alexandria, Heath tells the group that the walker herd is a result of a group of campers getting trapped and eaten by walkers. The noise they made attracted more and more until it became the million walker march – ironically just outside of D.C. They realize that, eventually, all of the walkers will break free and head east towards Alexandria. This is when they came up with the plan that we’ve been seeing take shape so far. Even though people (Carter) try and come up with alternatives – I mean, who wouldn’t? – and questioning Rick for executing Pete, Deanna says they’ll follow Rick’s plan. People slowly start to volunteer, including Nicholas, who gets a look of death from Glenn after their past drama.

Funny moment: Gabriel offers his assistance and Rick shuts that down with a major quickness and hits him with the immediate “Uh… How bout no?”

Michonne and Morgan start to fire off flares to help send the walkers in the other direction while they walk up against the metal plates that the group put there to work as a buffer. Things actually seem to be working the way they were supposed to – for now. 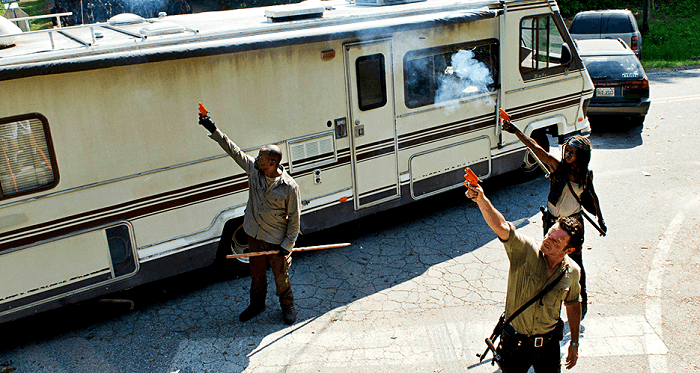 In the flashback, Rick and Jessie trade glances and Daryl reminds him that taking care of themselves requires them to bring new people, contrary to what Rick may think. Carol also reminds him that he’s pretty much in charge now.

Maggie goes up to Tara and confesses that Nicholas not only got Noah killed, but also tried to kill Glenn in the woods. Tara’s first reaction is to get Nicholas exiled from the community, but Maggie reminds her that she too was once on the wrong side of the fence but turned things around for the better. Morgan and Carol talk some, which may put my Morgonne theory to rest and plant some seeds for a couple I haven’t quite come up with a name for just yet.

Rick finally sacks up and apologizes to Deanna for what happened to Reg and commends her for making the right call. But because Rick is always trying to get something, he tells her everyone in the group needs to be armed. Just then, a group of walkers approaches and, as a lesson in tough love, Rick tries to get them to defend themselves without guns. After hesitating, Morgan jumps in to save the day reminding Rick that he claims he “don’t take chances no more.”

Later on, Eugene is looking through supplies and overhears a plan from the original Alexandrians planning to hold a revolt by killing Rick. Like the yellow-bellied coward he is, he dropped a jar and draws attention to himself. Curt holds a gun to his head and just before he pulls the trigger, Rick, Daryl and Morgan walk in to save the day and ask what in the hell he was doing. Then he schools him on what he would’ve done in that position (lookouts are important), takes the gun, points it back at him and gives Carter a verbal lashing for the ages. Rick decides to be the bigger person and offers Carter one last chance to work with them and survive.

Meanwhile, Glenn decides to shoot a window to the store open to let the walkers out and starts to shoot them down, with Heath’s help. Practically everyone almost dies, but they come to each other’s aid. I swear, if you look at that scene again, that walker went straight for Heath’s mop-head.

Abraham finds a few walkers walking away from the herd to follow a piece of what looks like aluminum foil (sometimes I hate how stupid they are), so he decided to be a hero and gets out of the car and circle them back around. After you think he’s a goner, he runs back into the car with the walkers filing back into place. 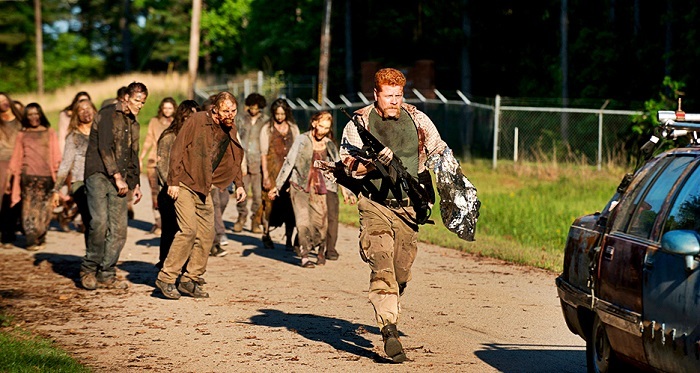 Rick, Michonne, Carter and a handful of other Alexandrians decide to continue to lead the herd on foot, but Carter gets caught by a walker that takes a bite out of his face. His screams draw the herd, forcing Rick to give the order to fire guns and get them back on track. Rick comes and kills the walker, but can’t convince Carter to stop screaming, so he stabs him in the back of the head like some kind of mafioso with an ice pick. For the second time, Morgan walks in on Rick standing over a dead body. Morgan and Michonne mourn over Carter, accepting that things are just the way they are, and walk off to make sure the herd doesn’t break off again.

Back in Alexandria, we see Rick invite Morgan to stay in his house and lets him hold Judith, which may be the first time he’s seen a child since Duane.

Morgan finally gets everything off his chest and thanks Rick for coming to save him back when he was crazy and living on a block-sized booby trap. Rick confesses that he wanted to kill Carter, but ultimately changed his mind after he realized that people like him are going to eventually die anyway.

Rick finally breaks the silence and goes to talk to Jessie about what happened. She scolds him for talking to Ron the way that he did, but reminds him that the last person that should reprimand a teenager is the man that killed his father. To show him how real things are, she shows him a gun she got and explains that she’s going to learn how to use it and teach her sons because she’s going to fight from now on.

After going over the plan, Abraham approaches Sasha and makes sure that she isn’t on some sort of death wish – remember, she did take a peaceful slumber in a pile full of walkers last season. She smiles and denies it. When they come across the store full of walkers, Glenn approaches Nicholas saying that he’s nowhere near ready to forgive him yet. So he’ll let him know when he can start making things right between them.

Rick gives the group a motivational speech on how the plan may sound insane, but it has to be done before the walkers come for them later on.

Suddenly, while directing the walkers, the group hears a horn going off in the distance, bringing the walkers off the road and into their direction. Rick determines that the sound is coming from Alexandria, so they rush back.