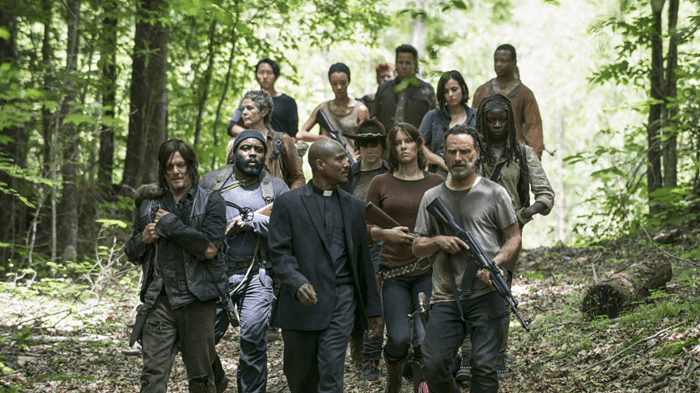 BRAH! Before I get into this recap, lemme officially dub The Walking Dead as ‘The Wire: Revival’. The only two things The Wire fans need now from The Walking Dead is to see Avon Barksdale not-going-out-like-no-punk-blastin’-walkers-for-tryina’-snatch-his-corners and then the king, Omar Little, strollin’ through the woods with an unlimited supply of shotgun ammo.

Seth Gilliam joins the cast as Father Gabriel Stokes who’s both parts hilarity and anxiety wrapped into one priest with a dark secret. Our favorite walker hunters come across the good priest being ambushed and he quickly leads them to his church where he’s been holed up since the outbreak. Rick realizes quick-fast that he’s hiding something but thinks him harmless enough to let it slide, so the group can use his church as a home base to gather supplies. Rick leaves Carl and his new stay-at-home nanny, Tyreese, behind when they set out to get some food:

Father Gabriel takes them to this walker-infested-swamp-building where I’d be sure to wear rattlesnake boots in case any lone walker heads are hiding under water waiting to nibble on my toes. Our crew expertly lays the smackdown on the decaying walkers (have you noticed that the walkers are getting more and more rotten as the seasons progress?) but not before Father Gabriel loses it to some walker he apparently knew when she was alive. Rick acknowledges his softness and keeps it moving.

But on the real, let’s get to the meaningful parts of this episode. The crew gets back to the church where Carl shows Rick some scratch marks he found outside on a window and also, “You’ll burn in hell for this” scratched into the paint at the back of the church. Carl reassures Rick that they can handle this, but Rick’s already on his bust-a-cap mode of thinking with Gabriel. He passes it off, but clearly realizes that Gabriel likely locked his parishioners out of the church when the plague struck and allowed them all to be eaten alive as he cuddled up with his canned foods inside.

Our heroes hunker down and take a well deserved party night using some church wine to celebrate escaping cannibals. Everyone’s lit, including Gabriel who tells Rick, “It’s just wine until it’s blessed.” Possibly alluding to the loss of his own sanctity as a result of the plague while still pretending to be a man of the cloth as it’s all he’s known. Meanwhile, Bob’s got watch duty for the night, which makes sense because he can’t touch the wine, he gives Sasha a foreboding kiss before heading outside to have a good cry about his alcoholism and is knocked out mid-cry. Bob wakes up in the camp of the remaining cannibals, the show suggests that they followed the tree markings that leads to the church to find their lost meal. Bob’s tied up and Gareth’s sitting in front of him talking that non-sense while chewing on some fresh meat. Sadly for Bob, as the camera pans out he realizes with the rest of the audience that they’ve made a feast out of his left leg. They done made Bobby into the new Hershel.

In the midst of all this, Darryl and Carol are seen taking off in a car they found to chase after the supposed captors of Beth. With no way to communicate this to the rest of the group, it’s safe to assume that Rick will be evening the score for 3 heads come next episode. Com’on back next week when Black Nerd Problems’ own Taj get’s into it with episode 3: “Four Walls and a Roof.”