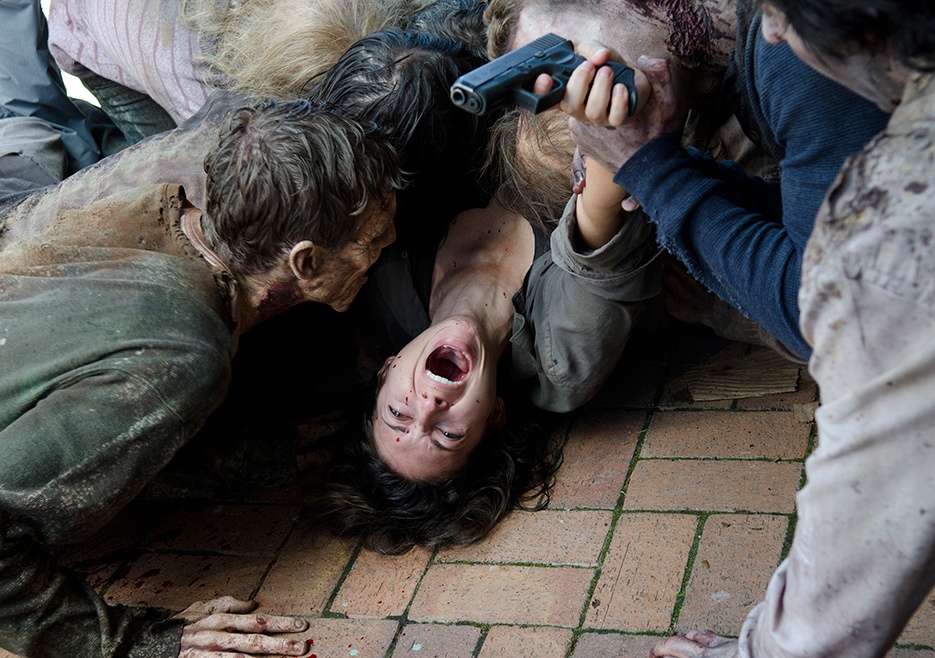 The first face we see in Season 6 Episode 3 and the recipient of the titular “Thank (but also fuck) You” is Glenn. He’s running away from half of the herd: the half that heard the siren call of the eighteen-wheeler that plowed into Alexandria’s walls. He’s running towards his own death.

[divider type=”space_thin”]
The thing is: I don’t care if Glenn dies or if he miraculously lives in some weird Misery-esque bait-and-switch revisionism as the whole of the Internet and a world full of wishful thinkers hope. That’s only partially because of my inability to feel. It’s mostly because I’m thinking about time, relationship, and redemption.

We are three episodes into this season and only about two hours have passed. “JSS,” the second episode of the season, starts about halfway through “First Time Again,” the first episode. And in “Thank You,” we have the horn and the appearance of the Wolves to orient us in time.

This kind of magnification highlights the interdependence of the group. It’s easy to say that the survivors depend on each other or that Nicholas caused Noah’s death. Those things are obviously true. But what do second chances depend on? I’ve already said that Glenn should have left Nicholas’ still warm corpse in the woods when [and I’m shaking my head as I write this] the coward tried to kill him. But Glenn didn’t.

Just like Michonne didn’t let Andrea die when she could have, because as ruthless as this world might require someone *cough* Rick *cough* to be, it also asks them to not do it alone.

That’s why people are still getting married. (No, it’s not just the irresistible we-ain’t-showered-in-six-months sex.)

“How long have you been married?” Michonne asked, or, as the newly-bitten pre-walker in the group heard it, “Here, I extend to you this invitation to say all the things I hide in the deepest folds of my soul.” It’s not exactly the confirmation I want about Michonne and Andrea’s relationship between Seasons 2 and 3, but it was enough to make me remember that Andrea was sick at the opening of the third season. She asks Michonne to leave her, but her friend doesn’t leave her behind.

She’s by Andrea’s side, still, in the end in Woodbury. After the stupidity and betrayal. So Glenn’s forgiveness is not without precedent.

And that’s how we end up spending most of the episode on a walking tour of Nicholas’ cowardice like we crossed over into The Cell. Looking for either any redeeming quality at all or (let’s pretend there’s an alternative to that) waiting for him to do some shit so stupid or cowardly as to give Glenn permission to give up on him.

They’re in the town where Nicholas and Aiden led their party to their accidental deaths or possibly left them to die as the two “leaders” of the group ran away or – who knows? –  they could have Shaned them (killing a member of your group to serve as a buffet-style distraction while you escape).

[divider type=”space_thin”]
Nicholas is having moments of paralysis; he can’t talk and is unresponsive. He snaps back to reality, but it happens enough times that if I were Glenn and this dude was like “I’ll draw you a map” I would not have answered with “No, you lead the way” unless immediately after I said “so I can Shane your dumb ass into the herd as I try to save myself.”

And as much as I want to be mad at Glenn for giving this dude a second chance, Tara is still alive (and to her credit wanted to kill Nicholas last episode after finding out that he attacked Glenn) and she showed up outside the prison with the Governor’s crew on the day Herschel died. On the day that set the machine of Beth’s death in motion. And Maggie trusts her.

Eugene is still alive despite telling the world’s most transparent lie. Carol is alive because Tyreese didn’t kill her when he found out she murdered his girlfriend to save the group. So, yeah, I get it, but at some point people have to earn chances and Nicholas hasn’t.

Tara showed up for work at Terminus. Carol asked a little girl to look at the flowers because Tyreese couldn’t. Eugene… I’m still waiting on him to do more than repent and use his failures as a cautionary tale, but hell everyone needs a good “don’t me be” dude in their crew. [Whoever you just thought of is that person.]

The problem occurs when people decide that they are in a bad relationship. More than a moral compass, the group needs a friend to take them out to Chili’s (where all the realest relationship advice gets dispensed over fajitas). What I’m tryin’ to say is, “Glenn, you can’t change him, girl. And when the waitress comes back, ask for more salsa.”

[divider type=”space_thin”]
But Glenn can’t. I guess part of being an expectant parent (Maggie gotta be pregnant with all the not-fighting she’s doing) is hoping that the shit-covered apocalyptic world isn’t also shit-filled. But… it is. And also dipped in shit. And covered in shit sprinkles.

Because what Glenn gets in return for his faith is first watching a suicide and then falling into a herd of walkers. And now, he can’t (or didn’t, for the hopeful) light the fire that was going to distract the walkers. Now, there’s a link missing. A job that won’t be done.

That’s what these three episodes have stressed: survival is one big Rube-Goldberg Machine — except it didn’t work. Because the pieces didn’t work. When Morgan doesn’t kill a Wolf or, worse, lets a Wolf take a gun as he leaves, then Rick gets shot at in the RV. When the idiot in the first scene freaks out and shoots his own teammates, then the group has to stop in the pet shop to improvise some crutches and Glenn dies. When Spencer can’t shoot for shit, the herd breaks in two and people die.

Being a coward is a luxury that your friends can’t afford.

It’s what Rick means when he says “We keep going forward for them. We can’t turn back because we’re afraid… going back now before it’s done, that’d be for us.” Ask Annie, the red shirt with the twisted ankle, what it means to die with purpose. In the end, everything Nicholas did was for himself, even dying.