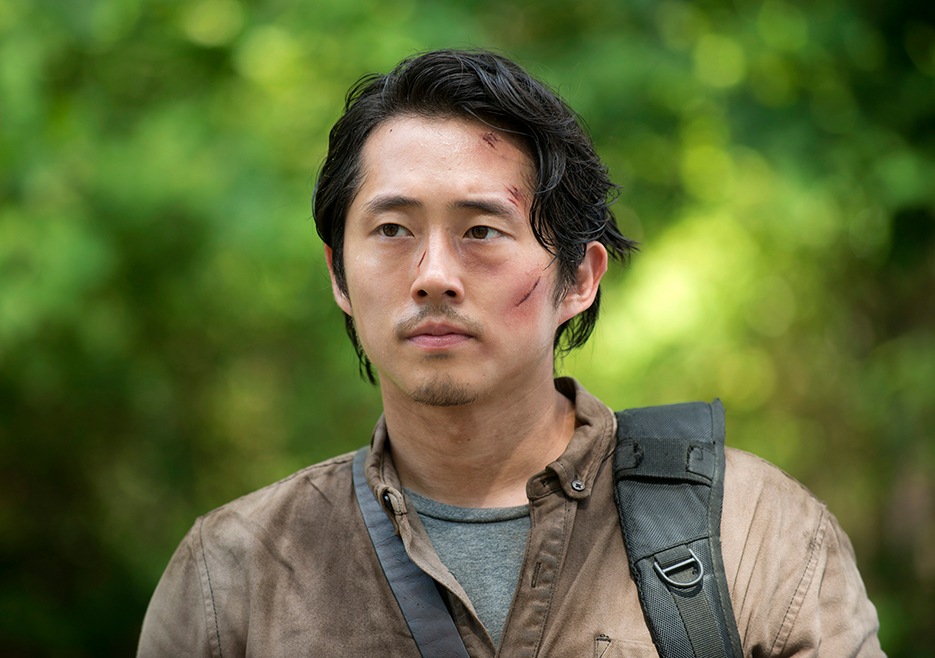 Warning: The spoilers are everywhere.

[Editor’s Note: To put in perspective how hard the latest episode of The Walking Dead hit viewers everywhere, I should note that I’m just now sitting down to write this recap at midnight. The episode finished three hours ago.]

“Thank You” is the third episode of an already exhilarating sixth season of the AMC staple. After showing the cause of the loud horn going off near Alexandria in the last episode, we catch back up with Rick, Michonne, Glenn and a handful of Alexandrians as they head back home before the herd of hundreds of walkers can catch up to them.

Rick takes the lead (like always) as the group runs towards Alexandria and informs Michonne and Glenn that he wants them to make it back at all costs, but warns them that the Alexandrians could slow them down, which Heath overhears. One of the people in the group expresses his fears and frustrations and blames Rick for everything that’s happened (also like always). We’ll just call him “Alexandrian #1” because he didn’t last another five minutes before a walker was chomping down on his neck. [If it really matters to you, his name is Barnes.]

While walking through the woods, the group comes across a herd of walkers that Glenn and Michonne volunteer to take on first. Another group of walkers approaches, so Scott and another Alexandrian named David jump in to help. While they hold their own at first, “Alexandrian #2 ” (Sturgess) freaks out and accidentally shoots Scott in the leg, sending him to the ground, but runs off on his own out of fear in a bucket hat so big that ScHoolboy Q would be jealous of.

While helping to keep the walkers from getting to Scott, who apparently learned some MMA ground moves, David is bitten by a walker, leaving a noticeable gash on his shoulder.

The group pushes forward and ends up on a road that leads them into town – a halfway mark to Alexandria. They stop in an empty pet shop to tend to Scott’s bullet wound after coming across Alexandrian #2’s dead body outside. While inside, Glenn devises a plan to distract the handful of walkers that are outside, and the herd that’s quickly approaching, so that the rest can make a run for it. After Michonne puts up a fight, Glenn convinces her that he’ll catch up and takes Nicholas, the same man that tried to kill him before, along to show him somewhere safe to hide out.

Glenn then radios Rick to tell him about the plan and says “Good luck, dumbass.” Uh-oh… they’re calling back on old things. That’s not a good sign!

While waiting for the walkers to clear out, Michonne confronts Heath after he gave her a death glare out of the side of his eye. He questions her loyalties and willingness to leave him and his people behind if need be. Michonne reminds Heath that “real recognize real, and you lookin’ real unfamiliar right ’bout now” and leaves him feeling embarrassed.

After Michonne promises David that he’ll be able to get back and say goodbye to his wife, Betsy, she hears a pounding on the back of the pet store wall. She finds a hidden back door and opens it to find two walkers. She quickly kills them, but only after they attract the walkers outside, which now includes the  approaching mega-herd. 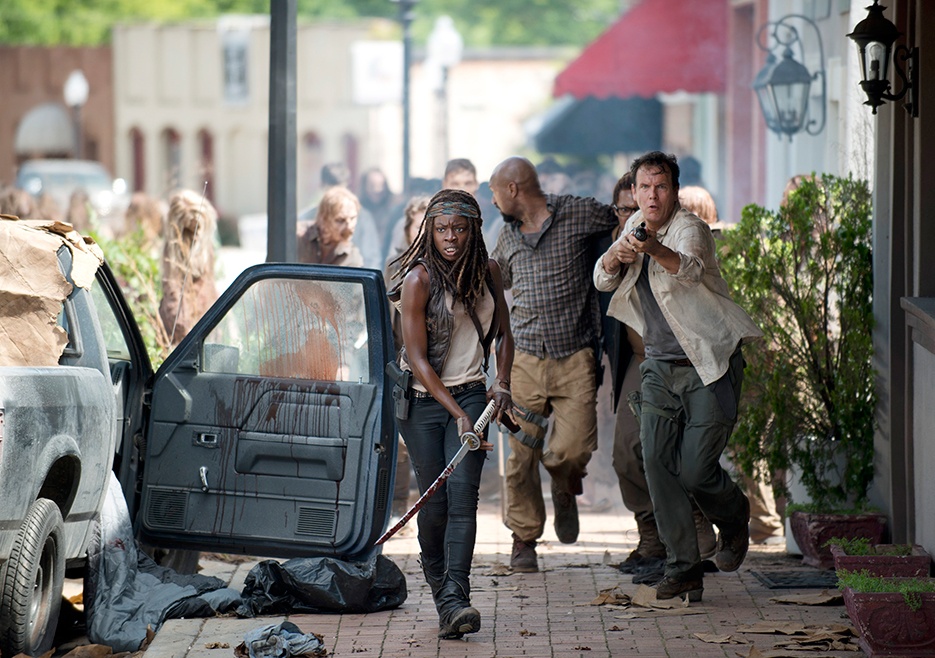 Michonne and Heath gather the wounded, which includes Scott (bullet wound), Annie (on a crutch for some mysterious reason) and David (walker bite) and make a run for it. They walk outside of the store and Annie immediately trips, because The Walking Dead isn’t too good for 1980’s horror cliches, and takes out a couple of walkers with a pistol before being overwhelmed.

They head to an alley that’s closed off by a fence. This would be a perfect time for the guy with a bullet wound in his leg to get left behind but noooo, he’s one of the first ones over because he has the upper-body strength of a gymnast. Instead, Michonne is left for last alongside the dude that’s already halfway dead because he got bit as the walkers get close enough to grab their feet.

Heath does his best to help by shooting away the walkers holding onto Michonne’s legs and she’s eventually able to climb over. But David, who, again, was dying anyway, gets pulled down and eaten by the walkers. For some reason, Michonne, Heath and Scott decide to not mercy kill him and watch for a little bit too long as he dies.

The three eventually make their way back to post-attack Alexandria.

The Fate of Glenn Rhee

Meanwhile, Glenn and Nicholas are running to a building that he said they could hide out in with walkers close on their trail. The good thind is that Glenn made Nicholas come with him, even though he offered to draw him a map instead – yeah…. aight.

They come across a walker, which is actually one of the many people that Nicholas left for dead, so he elects to do his penance by now killing him. They soon discover that the building Nicholas suggested they hide out in was burned down (or didn’t ever exist?). They too run into an alley that’s fenced off and try to climb it, but can’t because there’s a group of walkers waiting on the other side. The two decide to stand on a dumpster and stand their ground against the 200 walkers headed their way.

After displaying PTSD-like symptoms for the entire episode, Nicholas starts to have a panic attack while looking into the eyes of the hundreds of hungry zombies trying to get to him. He turns and sees Glenn trying to snap him back to reality. After pausing for a few moments, Nicholas tells Glenn “Thank you…” and shoots himself in the head. His body bumps into Glenn and the two fall into the sea of walkers. All that you can see is undead hands ripping into a body and Glenn’s expression of terror on his now blood-soaked face.

[Disclaimer: There’s arguably reason to believe that the body we saw the walkers attacking was actually Nicholas’ and that they haven’t gotten to Glenn yet.]

“Dear fans of The Walking Dead, this is a hard story to tell and when we were planning to tell we knew our friends at the Talking Dead would be talking to you about it and knowing you’d all be talking, and feeling and commiserating, I knew we should say something about it lest our silence say something we didn’t mean to say or not say,” Scott M. Gimple said in a statement. “So I’ll say this: In some way, we will see Glenn, some version of Glenn or parts of Glenn again, either in flashback or in the current story to help complete the story.”


[divider type=”space_thin”]
This may be one of the most ambiguous ass statements that I’ve ever seen. It basically says that they aren’t painted into a corner [yet] and that there’s still a chance Glenn could make it out of this… somehow. I don’t mean to be overly optimistic here, Glenn’s no Jon Snow, but I’d say there’s a 35 percent chance he isn’t dead yet.

Meanwhile, Rick’s been running a half-marathon through the woods and along the highway. On the way, he comes across a trip of walkers feasting on a body. They attack him and Rick appears to injure his hand. Maybe this means that he’ll have to cut off his hand and be even more like the Rick Grimes of the comic book…??

He eventually makes his way to the same RV they’ve been driving around in since season 1 and continues the trip back towards Alexandria. On the way, he reaches out to Sasha, Abraham and Daryl, who are still leading a noticeably large herd away from Alexandria, on the walkie talkie. He tells them to continue with the plan because if they head back to help, they could bring the herd back with them. Of course, Daryl doesn’t listen and goes back to help.

The RV breaks down like it always does and Rick is off on the side of the road. All of a sudden, the same member of the Wolves that Morgan let leave with a gun in the last episode (who I think looks like a dirty Vic Mensa) shoots inside the RV, almost hitting Rick, and is followed by another. Rick goes into berserker mode and shoots both of them dead. Then he sees another group of them trying to sneak up from the side-view mirror. He grabs one of the dead Wolves assault rifles and goes all Rambo and blows a dozen holes into the side of the RV, killing them all. With the RV still not working, the episode ends with a large number of walkers surrounding the RV, which were most likely attracted to the gun fire.