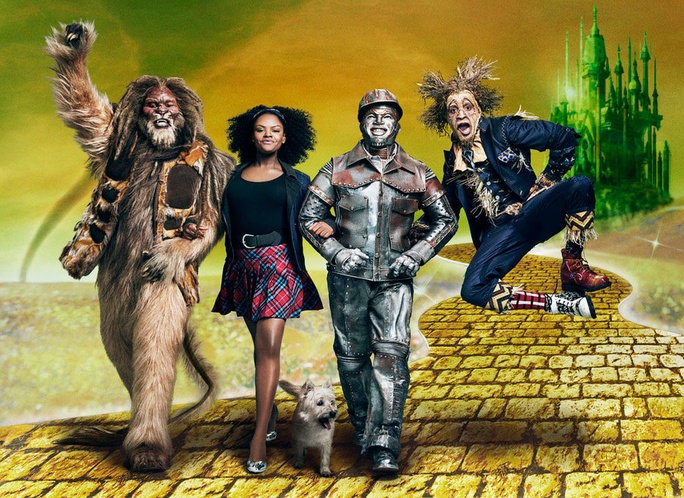 Last night’s presentation of The Wiz Live on NBC has me feeling feelings I didn’t know I had about a 30+-year-old musical. When I was growing up in the late 70s/early 80s, I watched The Wizard of Oz regularly on network TV. I had the sense even then that I was going through the details of someone else’s memories, that Kansas, that Auntie Em, they belonged to Dorothy, but not to me. The famous black and white opening sequence, the technicolor middle, the longing to return to a “home” that had at one point felt like a prison…it all fascinated me, but I wouldn’t say I understood it. In the end, the whole movie was like that opening sequence: color-free.

Then came 1984 and The Wiz on CBS. In my memories, it was the first time I heard Lena Horne sing, thought given my grandmother’s record collection, I know that can’t have been true. It was quintessential Michael Jackson piece, sometime between Off the Wall and Thriller, when he was magical, before we all started to think he was crazy, before the business with Bubbles the Chimp. It is set in Detroit in my head, though I know in reality the movie is set in Harlem…I can only guess that for 10-year-old me, Detroit was the Blackest place I could imagine. Diana Ross in that silly little dress was my least favorite part and Richard Pryor’s Wiz was my favorite. Richard Pryor who boasted and fretted and whom I both hoped and feared would say motherfucker at any moment.

What left the biggest impression on me were the villains, the Crows harassing the Scarecrow, the creepy subway peddler, Evilene and her literal sweatshop. To this day I have only one phobia, one thing that genuinely, when faced with it, I have to stop and take a deep breath to endure. Parking garages. Here’s why:

And Evilene’s sweatshop? My dad worked in a GM factory. I imagined that a factory floor looked like that sweatshop, full of brown people sweating and building endless arrays of things.

All this is filled with fear and nostalgia, together telling me that this movie was a significant moment in my young life, that it filled in so many gaps in my childhood understanding and fed my imagination, even now. It redrew The Wizard of Oz into something entirely different, gave me a version that was magical and real that I could understand. I look back and think that The Wiz showed me in one 2-hour sitting that there’s always another version of the story, one that fits your facts and not anyone else’s. I wasn’t in The Wizard of Oz, but I was in The Wiz.

Since then, I’ve discussed The Wiz many times. Inevitably, white people have never heard of it and Black people can name their favorite song and character. It has become a cultural touchstone, a movie that we share across distance and generations. It satirizes our stereotypes — the lips on those monkeys, the asses on the female workers — while it glorifies our beauty. In each frame and close up, our faces are beautiful, even when they are supposed to be scary or evil. And that moment when the workers, the Winkies, crawl out of their fake, bulky suits and reveal gorgeous golden underwear and slinky, sexy, muscled bodies to the tunes of “A Brand New Day”? Even I, who’s never worked a day of hard labor in my natural life, even I know that’s what freedom is supposed to feel like. I still cry when I see it. And when Glenda sings Dorothy home…Lord, even with the babies floating as stars in the background, it is perfect. Tonight I shared The Wiz Live with my child. She has never seen The Wizard of Oz, so this version will be her center, the original movie will be some strange knock-off she may never bother to watch. The pacing for TV felt forced at times, like the story was smooshed to fit within the commercials. Plus, no Toto. It is definitely different from what I remember, a theatre production and not a movie. As such, it was at moments less miraculous and less personal. But at moments — when the tornado whisks Dorothy away, when the crows cock their heads and make the Scarecrow sing “You Can’t Win”, when the Emerald City citizens vogue their night away — it was just as good. And there were no parking garages or terrifying monkeys, so that was for the best.

Both the movie from the 70s and the many stage versions that have followed are Black Excellence. We re-center, re-configure, and re-write, then we use those images to fuel our own unique vision of the world, the one we have and the one we wish for. I’m glad NBC re-tooled and shared The Wiz Live and I’m glad I got to share it with all of you. Now, back to Emerald City.