[dropcap1]W[/dropcap1]hen this episode started I was excited: we know that the steeple has fallen and broken through the wall. We know that the people we’ve come to care about are once again in imminent mortal danger. But we don’t start there. We start with Sam, still upstairs in his room, still afraid of the monsters. And I’m excited that the panic and chaos are held off by highly polished hardwood floors and an old song creaking through the air. This is the tension I’ve wanted all season.

Then we get hit with that visual metaphor: The line of ants filing into the room through Sam’s window – one after one after one – to swarm and eat leftover cookie. And the music distorts. And then credits.

And I’m thinking: why you been holding out on me, AMC? All season you had this waiting for me and you made me suffer through that bullshit? But. But then the commercial break ended and, with it, my hope for a satisfying mid-season finale.


[divider type=”space_thin”]
Glenn is still outside the walls. He’s still trying to convince Enid that people™ are worth fighting for. Enid is still emo and angsty. Deanna is still trying to save everyone. Rick is still trying to single-handedly fight a herd of zombies using only a single clip of ammo, his 5 o’clock shadow, and the sheer force of his super-manly pheromones. Sam is still hiding in his room. Maggie is still fumbling for her gun like seasons 2, 3, and 4 didn’t happen. Morgan is still on his #WolvesLivesMatter bullshit. Carol is still mother-hen-meets-commando. Michonne is still staring at her sword like she doesn’t want to use it, but can’t avoid it. And then I get it: nothing has really happened so far this season.

Back in October, I was so excited about the way the writers were manipulating time in the first two(ish) episodes, that I was hoping that the entire season would cover 24 hours. I thought that by slowing down time, the writers would be able to focus on the characters.

I was hoping for an exploration of the characters or a change of some kind. Any. Kind. I mean we got a taste of the interdependence of the characters in “Thank You” but, beyond that, it’s been more of the same. This is like Farm: The Remix, The Prison 2.0, and Woodbury: Reimagined rolled into one. AND THAT WOULDN’T EVEN BE SO BAD if we were seeing Rick, in particular, appreciate that.

Instead we’re getting these rehashed story arcs:

None of this is inherently bad, but it seems like so many missed opportunities. If the theme of the season is Us vs. Them as in “Who is ‘Us’” and “Who is ‘Them’” and “What is our responsibility to the Other?” and maybe even “Can we switch teams?” and if Morgan’s character is essentially the embodiment of that conflict, then where is the catharsis?

Part of the problem is that there are too many new characters for me to be emotionally invested in any of them beyond the core group. Let’s do an Alexandria roll call right quick:

Deanna, Spencer, Aaron, Heath, the captive Wolf who is alive by the grace of Morgan’s softness, Denise, Olivia (not gonna lie: for a few episodes, I thought Olivia and Denise were the same person), Jessie, Ron, Sam, Enid, Eastman (he never made it to Alexandria, but we all know Morgan carries a piece of him in his heart). And those are the people who have in some way gotten good screen time.

There are more who were only on for a few minutes or less: The couple who rolled Darryl for all his goods, Scott, Annie, Tobin, Bruce, Francine, Carter, David. At the point where I have to take off my socks to count characters, you need to thin the herd. And perhaps this is where Negan comes in.

Writers, you need to kill some of these people or have them go full on extra. Why do I need to know your name if you aren’t doing shit to move the plot forward? Or to act as a clarifying agent for one of the characters I do truly care about? There were so many characters and so many subplots/parallel stories going on that offering insightful (and please god) surprising character development was impossible. Again, I’m not asking for 8 episodes, each focused on a single character.

I mean that I can remember moments in my life that changed me forever. Not hyperbole. I mean that each of us has moments like that: before them we are who we are, after them we someone new. The Enid we meet is a result of such a moment: seeing her parents die. Carl, as we know him now, is a product of killing his mother the night Judith was born. Glenn is in some ways a product of Maggie going in on him at the farm when he stupidly risked his life trying to lasso a walker who’d fallen in the well. But this season? Rick killed Pete while his wife watched and nothing changed. Even when Michonne knocked him the fuck out


[divider type=”space_thin”]
It’s not just Rick. No one has changed (except Maggie – who hasn’t changed as much as she’s gotten less airtime and become less interesting with this season/pregnancy). And if the 2 minute preview of the second half of the season is any indication, no one is going to change. Instead it is an “add villain and stir” end of the season. Meh. I’ve seen it before.

That said,
these motherfuckers are tryin my patience

Fuck you Sam. By “Sam,” I mean Sam’s mom, Jessie. You are his only surviving parent. I know he’s traumatized, but – and hear me out – pretend you and your kids are black for 10 minutes. You know that feeling of having been through some shit* and knowing there is more shit to go through and that no matter what you gotta go through it. Yes, that. I want you to embrace that fundamental truth of blackness and just deal with it. It sucks but tell your kid the hard truth about the world around him because even though it’s definitely not guaranteed, it might, maybe, possibly save his life when he goes out into a world that wants him dead. 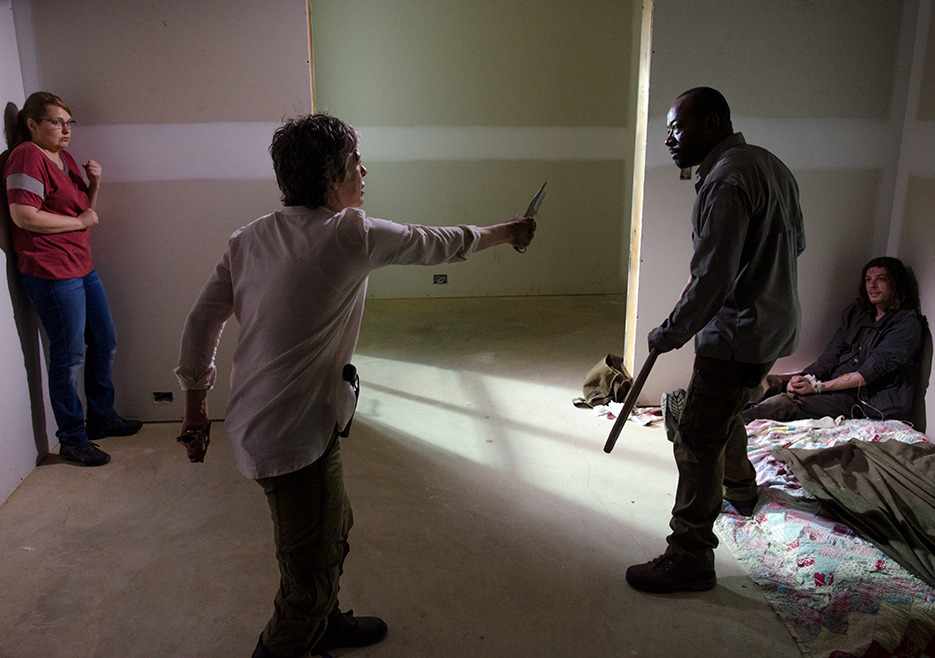 Carol, why have you forsaken me in my time of need? We both know I’m on Team Carol but come the fuck on. The Carol I know and love waited until the middle of the night to slit some throats and burn some bodies and then slipped back into bed like her name was Shaggy. But now, she can’t wait an hour to find out who Morgan has trapped in cell? What exactly did she think was going to happen? The entire town is infested with zombies – thousands of them. Morgan has to sleep sometime, right? So wait and then go downstairs (and let’s hope that Denise wasn’t Multiple Miggs by the Wolf). What is the rush? You turned out the light and made a run for it with a pocketknife? What kind of out-of-character fuckery is this?

Carl, what’s your long-term plan with Ron? Dude tried to kill you. Dude is the reason there’s walkers in the house. Dude is dangerous and that’s not a passing phase: he asked your dad to teach him how to shoot a gun so he could kill you. High fives, though, for telling him bout his daddy.

Michonne, whom I adore, this is not Million Dollar Baby and no one gives a fuck about the mysterious Latin phrase on Deanna Alexandria Sim Expansion Pack. I mean, I care what you want because you are the most interesting and relatable character (to me), but if can be real about it I need you to stop being Bastian about this shit


[divider type=”space_thin”]
Morgan, I hate you. Did you really just in one episode enlist Denise to help you with the stupidest plan ever (and then lock her in a room with a sociopath) AND fight (and ultimately knock out) Carol out in order to save a dying killer AND get knocked out by that same killer because [newsflash] he’s a fucking killer who don’t give a fuck about you and your pacifism? Maaaan. I can’t.
[divider type=”space_thin”]
Everyone in Alexandria: Maggie can build flashlight javelins out of rebar, duct tape, and sadness but nobody – nobody at all? – can sharpen a stick and stab the walkers in the top of there decayed ass skulls? For real?

I’m just saying that if the only way to escape the zombies is to cover yourself in their innards, then maybe the first step in getting them to leave you the fuck alone is covering the town in a thin coating of deadass Walkers.

*overt racism, systemic racism, daily mico-agressions, underrepresentation in the media, misrepresentations in the media, Jim Crow, new Jim Crow, benevolent racism from hipsters. I’m not gonna link you to an article for each of these, instead I give you the gift of knowledge.