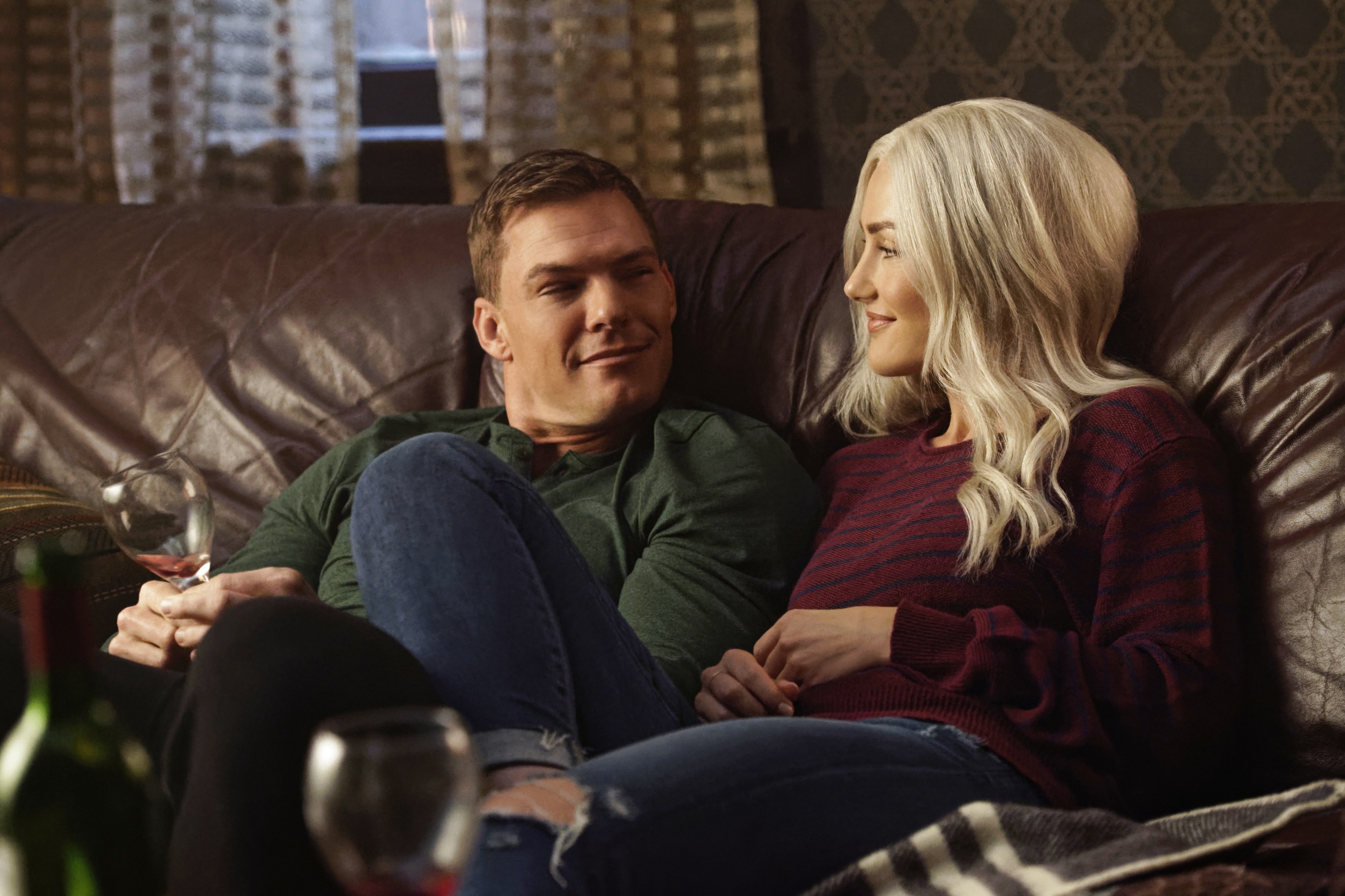 Welcome back to your weekly recap of Titans. Last week, we saw the team go their separate ways after the apparent destruction of the organization which also meant we saw Dick Grayson catch up with an old friend, Donna Troy, and we saw Kory Anders chaperone Gar and Rachel to a house somewhere in Ohio by train. The plot line converged when Donna managed to crack the code of Kory’s script to reveal that Kory was meant to kill the Raven a.k.a. Rachel. Surely, this will come to an exciting continuation.

Wait, this episode is focused on the origin story of Hawk and Dove? Characters we haven’t seen since they tossed one of them off a roof to make Dick Grayson feel guilty? Interesting pacing decision. Let’s see how it pans out.

An old user interface of a handheld camera pops on screen. We hear two men excitedly talk before turning on the camera. With some city as his backdrop, a man, nay boy, dressed in a modified football uniforms introduces himself as Hawk before the camera awkwardly pivots to introduce the cameraman as Dove. The two are on a stakeout to “persuade” a creep to plead guilty.

Cut to aforementioned creep getting kicked repeatedly by Dove. Hawk demands that it’s his turn, and Dove awkwardly takes the camera as Hawk runs into frame to continue the beatdown. After a couple punches, Hawk exclaims “Batman and Robin: you got company. Being Superheroes! It’s gonna be awesome.”

Clearly, he doesn’t know what’s about to happen next. Cue the guitar riff.

Back in the present and in DC, Hank continues to watch over Dawn as she recovers like… a hawk, nursing the pain with a bottle of alcohol. Hank hears the events of Episode 2 in his head loud and clear before taking a second to leave Dawn’s room and take a walk around the hospital. He keeps looking over his shoulder as he breaks into the drug cabinet and picks the lock to grab some meds. He returns to the room and begins to dream.

We cut to a football field, a young Hank pulling out the stops to score a touchdown. A kid in the bleachers excitedly cheers for Hank. The football coach looks proud when he sees the touchdown and absolutely mortified when he sees the kid cheering. Cut to a locker room, post-game. Hank finishes up his packing and sees the coach talk to the kid, revealed to be his little brother Don. Hank senses something is fishy, and the coach immediately reveals himself to be incredibly sketchy and takes a jab at the two being half brothers. Hank knows he needs to get Donnie out of there, but Donnie wants to see the weight room and coach is *way* too eager to oblige. Hank remains steadfast until the coach threatens the Hall brothers and makes a series of horrible comments, and Hank berates his brother into leaving and takes his place in the weight room. Listen, that’s dark even for this show.

Many years later, Donnie Hall is in an apartment rocking a Superman tee shirt, watching his brother on the TV playing football. And after an impressive catch, Hank gets tackled something fierce. Donnie immediately goes to see how his brother is doing. Hank is at a frat party clearly under the influence of some substance. Donnie finds Hank, and the two start talking about how Donnie thought Hank was coming home after the game, and Hank thought Donnie was coming to the game: y’know, typical sibling banter. It pivots to Donnie showing concern for is bigger brother, and Hank shrugs it off before collapsing.

At the hospital, the doctor asks how long Hank has had migraines, which is news to Donnie. Hank concedes he has had them for a couple months. Doctor confirms that Hank also has light sensitivity and memory loss and the prognosis is post-concussion syndrome. Doctor recommends rest and recovery, but Hank can’t do that until the football season is over.

In the public library, Hank confronts Donnie. It seems that Donnie called the athletics director because, I dunno, he didn’t want to see his brother get permanently injured. Hank becomes more furious as he talks about playoffs and how it was his choice to make, and the two are making a scene. When a bystanders asks Hank to calm down, Hank clocks him and a small brawl ensues.

At a fancy looking office, Hank and Donnie get an earful about their skirmish. The dean doesn’t want to lose Donnie, a star student who misapplied his extracurricular martial arts, or Hank, obvious star of the football team. So, the dean demands that Hank write a formal letter of apology. At this point, Donnie’s pissed that the school has basically cut years off Hank’s lifespan and goes off about how colleges take advantage of athletes. He manages to get the two expelled in short order.

Hank and Donnie then saunter off to a familiar set piece. Hank goes to the bathroom, and reveals… Rachel in the mirror? It appears something is amiss, as an ethereal specter calls out to Hank. Hank does not hear it though and simply closes the mirror.

Hank and Donnie discuss their childhood and Hank’s productive aggression with football. Donnie than recalls the incident at the locker room, and Hank doesn’t want to talk about it. So, Donnie suggests finding an alternative. Hank makes a joke about boxing and Fight Club before Donnie gets an idea.

Hank and Donnie start looking up predators in the area, before meditating on the systemic problems with various government systems. And the two decide to become trouble makers. As they ponder what their new call-signs will be, the camera pans to Rachel on a computer monitor, still calling out to Hank.

We zoom out, back to Dawn’s hospital room. We linger on Hank before pivoting to Dawn.

In Dawn’s inner thoughts, we see a ballet performance. Dawn takes center stage. Her mother looks on proudly from the audience. Dawn takes a bow to thunderous applause.

Later, Dawn and her mother have breakfast in a fancy restaurant. Dawn can sense something is amiss, and her mother informs her that she’s flying back to London soon. Dawn is shocked by the news and is distraught when she realize that her mother is leaving Dawn to return to her deadbeat husband. The two make some vague point/counterpoint about whether domestic abusers can get better over time.

Somewhere nearby, Hank and Donnie celebrate that the local newspapers got their names right after they shut down a child pornography ring. Dawn and her mother walk down the street and the two duos collide. Hank immediately sees Dawn and becomes smitten. And then, in what can really only be described as random happenstance from the current perspective, a car accident happens right on that corner of the street and all we hear is Hank calling out for his brother. The screen fades to black.

When we cut back, Dawn is entering a building hosting a grief support group. Folks are sitting in a circle on a gymnasium floor. Dawn listens to one of the stories, before getting asked to speak. Dawn refuses, and the moderator asks Hank, who also in turn passes.

Later, Dawn finds Hank at the bar and the two formally introduce themselves. Dawn tries to connect with Hank, but Hank is still very much in mourning. Dawn begins to walk away, before Hank becomes recalcitrant for a moment. The two slowly open up to each other about the loved ones they lost that day. The two go their separate ways.

At the next grief meeting, Dawn notices Hank isn’t there and finally finds her voice to talk about what happened. Dawn comments “it’s not fair it wasn’t anyone’s fault. That there isn’t anyone out there to blame” and you can slowly see where this is going. Dawn wants to make the world fair.

As she exits the building, Hank is outside waiting for her, and the two continue getting to know each other over a montage. Classic rom-com music plays. It’s all very cute.

When the montage comes to a close, Hank comes in with dessert. Dawn catches a falling item and explains the superhuman reaction due to her years of gymnastics and ballet. The two enjoy each other’s company and plan for Dawn to stay the night. But when Dawn goes into the closet to grab a pillow, Hank’s Hawk costume falls to the ground. It’s… hawk-ward (I’m so sorry. It was right there).

This leads to Hank showing his homemade superhero footage, and Dawn is not immediately questioning everything about Hank’s temperament. Instead, this leads Dawn to try and help Hank face his childhood trauma. It gets dark real quick.

Afterwards, Dawn can’t seem to sleep, so she begins searching Hank’s apartment. She finds the pain meds, the alcohol, and before long, Hank’s old year book. It looks like Dawn has some vengeance on the mind. Her gaze fixates on the coach’s old photo.

Hank wakes up to find his yearbook on the table, and his old abuser on the laptop screen.

Dawn is seen driving up to a fancy building. The coach opens the door, and Dawn confronts him. The coach denies everything, and Dawn accosts him. Coach brings out a gun, but Dawn knows enough about fighting and improvised weaponry to get the upper hand. And then Hank shows up. Hank instructs Dawn to go home so he can continue his unrelenting assault, but Dawn wants to stay and instead closes the door.

Back at the house, Dawn and Hank continue to “get to know” each other. The next morning the two wake up and Dawn realizes that their relationship is self-destructive. As Dawn walks away, she hears Rachel calling out. She looks down and sees Rachel’s projection on Hawk’s helmet.

And this stirs Dawn to consciousness, who proceeds to wake up Hank. Hank begins to panic, but Dawn calms him down and instructs Hank they need to find Jason Todd, and I’m not entirely sure where next the episode is gonna go.

So yeah, this isn’t exactly a healthy depiction of anything. I have lots of questions about the thought process here.