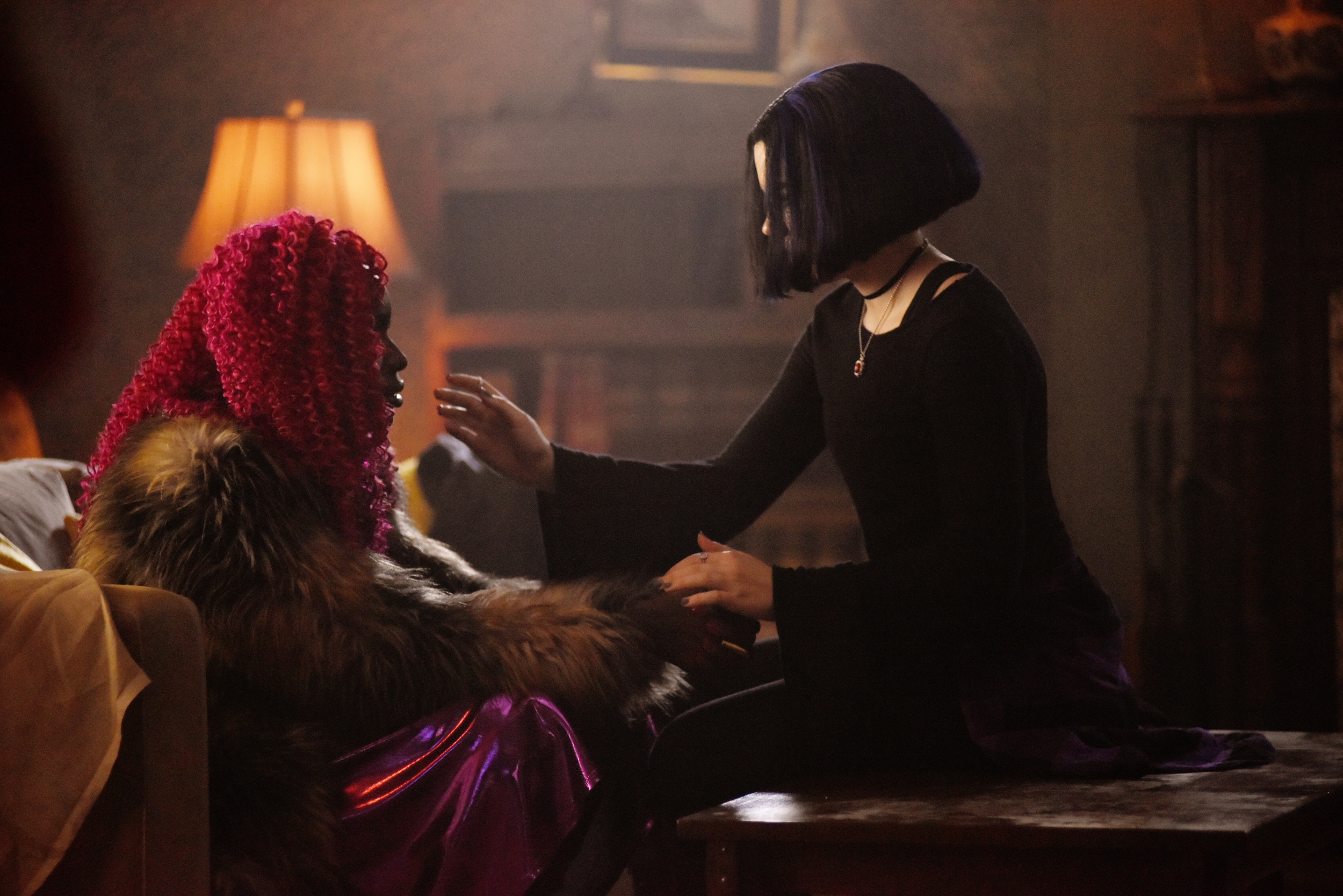 After catching up with our other favorite bird theme duo of superheroes, we pick up where we left off with the central cast: a semi-abandoned home in Ohio where Rachel’s abilities have awoken something in Kory with Dick and Donna Troy driving recklessly to meet up with the rest of them after some rough translations of an offshoot of Samaritan.

Whose ready for some more substantial answers about everything? Because I am.

Rachel finds herself in an abandoned hospital. Debris litters the floor. Rachel enters a room and sees a flickering image of Hank and Dawn, but they fade away. Rachel keeps trying to reach out to Hawk and Dove, but fire consumes the building.

In the real world, Kory has Rachel in a choke hold and fire is rising. Gar successfully managed to get Rachel out but takes her place in the vice grip. Kory’s eyes glow a malevolent green. Before Kory can do anything, Dick makes his entrance and quickly gets knocked down by a thrown Gar. Kory turns her attention to Rachel and Angela, but before the situation can escalate even further, Donna Troy intervenes with some magical lasso moves. And by intervene, I do in fact, completely KOs Kory without breaking a sweat. Poor Rachel is not having a good time with all the violence.

After the title card rolls, Dick helps Gar back to his feet and then tries to get an understanding of what’s going on. Rachel explains that she was trying to help Kory get her memories back, but it clearly didn’t go as intended. Meanwhile, Gar continues to be the biggest superhero fanboy ever, and I love my shape-shifting Titan so much. Donna Troy refuses to be called by her old call sign, but before any more quips can be uttered, Kory comes to with a mild case of short-term amnesia and is clearly unaware she just attacked Rachel. Angela wants her out and Dick tries to play arbiter, but Rachel is still flinching whenever Kory moves so she makes her exit after a couple more flashbacks.

Dick follows Kory out, and Kory’s flashbacks continue to flood her mind. She hops into the truck and drives off, leaving Dick and Donna at the house. Donna tosses a tracker via throwing star, and Dick gets a quick reminder that he’s not the only one with cool gadgets.

Back in the house, Angela nurses Rachel’s wounds. Rachel reveals to her mother that she had never been able to sense Kory’s thoughts or feelings until the incident earlier in the day. It turns out Kory was conflicted and both wanted to kill Rachel and not want to kill Rachel. Angela isn’t so convinced by this insight. Gar comes in with an ice pack, and Angela gives Gar and Rachel some room. As Angela walks back to the kitchen, she gets distracted by a light in the bedroom and finds an old phone buried underneath an old blanket. She answers and only static replies.

Donna and Dick are in hot pursuit of Kory. Donna’s convinced by the old documents that Kory is gonna kill Rachel, but Dick knows from the bottom of his heart that Kory may kill other people, but she’d never hurt Rachel. Donna rolls her eyes and asks if Dick is sleeping with Kory. Dick tries to wave the question away, but Donna makes some astute observations about Dick’s dating habits.

At the house, Angela is picking some surprisingly fresh food from a surprisingly not dead garden. She cuts herself with some sheers and when she looks up, a generic white man in a nondescript jacket is standing there, so we, the audience, immediately know he is almost certainly not to be trusted. Angela remembers the dude is Tommy Carson, and the two greet each other like they’re old friends. It’s apparently been 20 some years since Angela disappeared. Tommy tries to get some dirt, but mostly just exchanges silent head nods. Although, when asked why he’s there, he flashes a sheriff’s badge, so he certainly can’t be trusted in the slightest. Sheriff Carson asks if Angela has seen any cars that were part of a skirmish at a train station, but she replies “No.” Sheriff Carson continues to ask personal questions and asks Angela out for a drink/date. The Sheriff leaves, and Angela smiles.

Back at the Roth residence, Gar and Rachel eat breakfast. Rachel doesn’t have much of an appetite, because she’s still convinced she’s the reason behind Kory’s meltdown. Gar assures Rachel that Dick and Donna have the situation handled. In turn, Rachel drops the bombshell that she doesn’t want Gar to stick around. Rachel claims that bad things happen to people around her. Gar tries to rebut, but Dark Rachel flares up and Rachel’s even more stressed out. Angela comes in with some flowers, and Gar awkwardly makes his exit. Angela tries to comfort Rachel, but Rachel’s not sure that human connection is for her. Angela owns up to her past mistakes and implores Rachel not to repeat history and end up alone. The two embrace.

Upstairs, Gar wonders around the house, eventually stumbling upon old photos and a mirror. The mirror shows Gar with a bloodied mouth and sickly features. Gar quickly exits the room and the house to get some air. He dials Dick’s number but doesn’t get a response. He tries again, but all he gets is devilish static. In the field, Gar sees a bloodied man in a lab coat, the same one he bit back at the Asylum. Rachel comes out and asks Gar if he’s okay, and he really isn’t. Gar’s convinced this place has some evil energy but attributes it to stress. After some dialog, Rachel and Gar reconcile. Gar heads back inside to rest, but he keeps looking over his shoulder.

Kory pulls into a factory looking area. She gets out and walks towards what appears to be a warehouse. Dick and Donna roll up. Kory asks who the new girl is. Donna introduces herself as the one who took Kory out. Kory dares Donna do it a second time. Dick tries to mediate everything poorly.

Kory’s flashbacks continue to intensify. Kory’s confused by this flood of memories but seems to think the answer will be in the warehouse. She breaks the chain and enters the seemingly empty warehouse. Dick and Donna follow her in and find a weird purple scanner. The trio look up to see an invisible ship become very visible. The ship calls out, and Kory responds. The ship opens up, and Kory wanders inside. Donna and Dick exchange a glance before following her in.

Elsewhere in Ohio, Gar is knocked out cold in a bedroom. It’s now Rachel’s turn to wander about the house. Angela continues to try and assuage Rachel’s guilt, but Rachel’s pretty sure that her inherited darkness is all bad. But Angela’s convinced that Rachel is not her father’s daughter and that she will find a way to good. Although at this point, the old house is not vibing with anyone.

Kory continues to explore her ship as Donna and Dick look at all the neon lights. Kory’s memories slowly become more coherent but are still fragmented. The only thing of note is an ancient book which Kory calls “The Death of Worlds.” Kory triggers the central console and projects a future speculation of her home planet. It will die unless Rachel dies, not because Rachel will destroy but because her life is a portal to an evil dimension. Kory’s not entirely sure of the veracity of the book, but her muscle memory kicks in and she finds Rachel’s dad, i.e. entity to get the big bad back into play, in the book and projects a poor rendering of Trigon, whose game plan is to destroy Earth and then the rest of the known universe. Donna takes a closer look at the books and infers that Angela may actually be in on the whole summon Trigon bit, and the ship’s computer seems to verify the hunch. Dick drops an f-bomb at the realization he left his ward with an evil cultist.

Haunting at the Roth House

Gar wakes up with a horrid sounding cough. He limps out of bed and into the bathroom. He inspects himself in the mirror but eventually falls to the floor.

Angela wakes Rachel up and brings her to a sick Gar. Rachel rushes to his side. There’s a knock at the door. Angela goes to check, and it turns out it’s just Sheriff Carson with a house warming gift. Rachel cries out, and Angela (nonchalantly) explains the situation. The sheriff comes in and Angela closes the door a little too quickly. The sheriff begins examining a now bleeding Gar. His cell phone isn’t getting any signal, and Angela directs him to a landline in the kitchen. Rachel continues to hold Gar.

As Dick drives, he recaps how nefarious the entire Organization has been. Donna reads the tome and finds out that Rachel can defeat Trigon, although Kory mentions a prereq that Rachel needs to complete “The Trials,” 400 days of intensive warrior training. Dick’s convinced in Rachel’s resolve and slams the gas pedal.

Sheriff Carson finds out the landline is dead and when he tries to go out to the car, Angela stabs him. Angela gives a faux apology and explains she’s still in a relationship. Angela lies to Rachel that the Sheriff went into town and that the only option is to channel her father’s gift to save Gar. Rachel, concerned for her friend, begins channeling energy, but it’s not enough. Angela has an idea that Rachel’s father is powerful enough to heal Gar and tries to convinced Rachel to get him to help.

They change locations and Rachel is worried about summoning her father, but Angela continues to offer gentle encouragement. Darkness begins to engulf the house, and Dark Rachel reaches out to the darkness in the mirror and screams in agony as she pulls out a man from the mirror.

At that precise moment, Dick’s car dies in the middle of the highway, and everyone knows that this is the worst possible news. The trio set out on foot to try and save Rachel.

Trigon and Angela share a kiss, and Rachel is concerned but really wants to help Gar. Trigon does in fact have some fatherly instinctive and does heal Gar, although it takes him a seconds to draw the sickness out. Rachel embraces her father, and Trigon has a smile on his face, which you know is bad.

The trio run in darkness to where they think the house should be, only to find shimmering air. Dick breaks a dead sprint into the aura and manages to pass through, but Donna and Kory are stuck.

Angela asks Trigon if it’s time to destroy the world, but Trigon explains that Rachel needs to have her heart broken first. Ominous music plays as Dick reaches the front door…