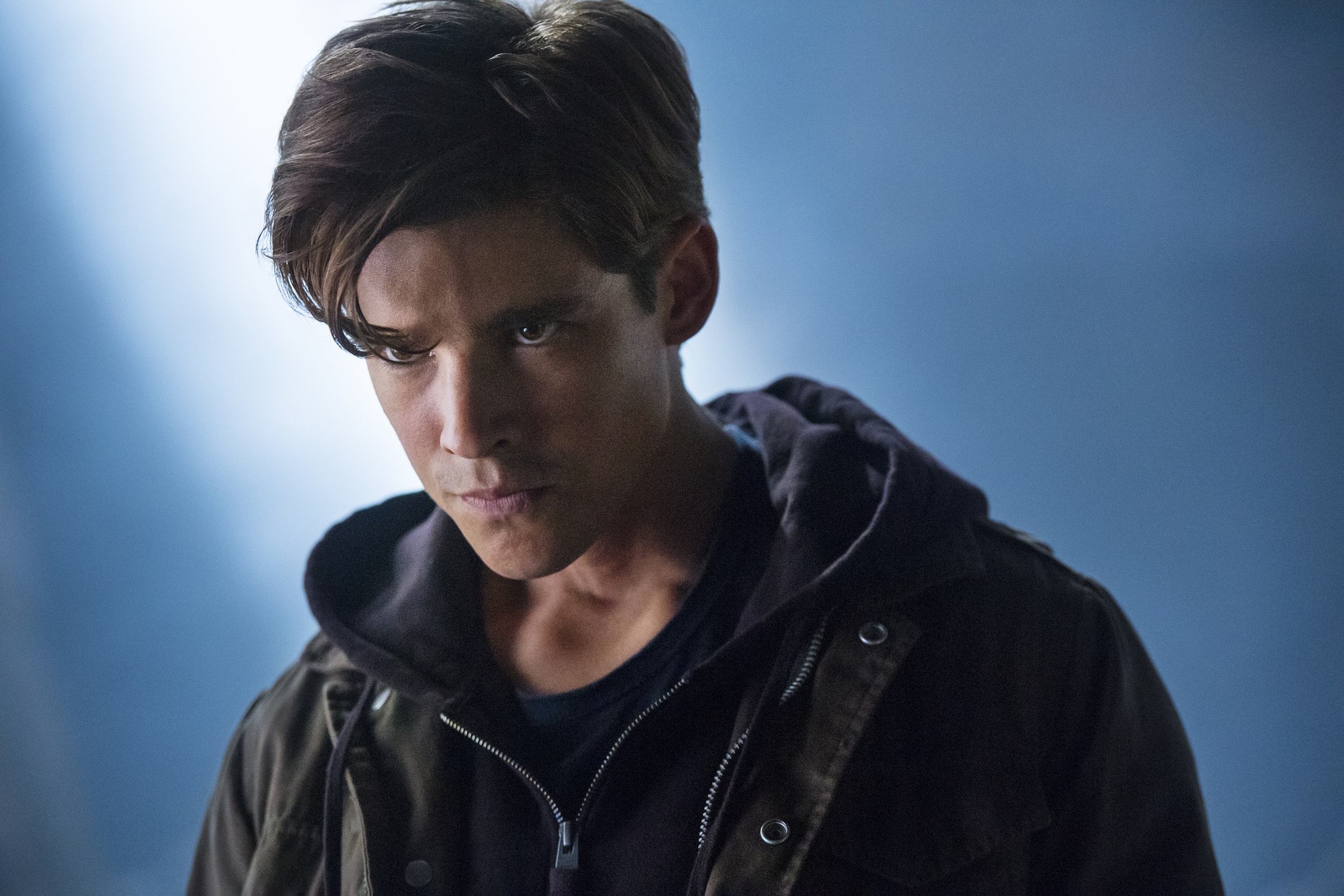 Ah Titans. It has finally come down to this. Our boy Dick Grayson is entering a haunted house determined to save a scared child and who know what dastardly tricks Trigon is willing to pull. The other Titans will presumably get involved. But between the prerequisite knowledge of the DC to keep up with what’s going on and the overall darkness of the story, it’s clear to see the series that proudly proclaimed “F8ck Batman” is more than willing to put the face of the show through one finale set of trials and tribulations. So join me one last time as we recap the finale vignette of the season 1: “Dick Grayson.”

As you already you know, spoilers below.

Wouldn’t It Be Nice?

As a catchy Beach Boys song plays, Dick Grayson is seen sunbathing in a pool in Sunny California. He’s smiling. After taking a swig of his drink, we see a small child yell “Daddy” and jump into the pool. Dick playfully chases him inside the house and up the stairs.

At the camera shifts upstairs, we see a visibly pregnant Dawn with color swatches eyeing the wall and we, the audience, known that something is clearly wrong and that there’s a 99.9% certainty that Trigon is behind this lotus eating machine, but right now Dick Grayson is getting a chance to be a happy in a Titans episode and we wouldn’t want to miss that.

As Dick dries his kid, Dawn is asking about wall colors for the new nursery. She wants to avoid the gender binary a.k.a. boy = blue and girl = pink, and honestly? Good for her. Kid proudly exclaims he wants a sister, so Dick gives a very high level explanation of bio-statistics. Dawn tries to move a table, causing Dick to heroically leap into action to prevent a lamp from falling. Dick offers to help given that there’s a still month till the the due date, before Dawn casually reminds Dick that their first child came earlier. Dick gets a little curt, but Dawn manages to guilt Dick into painting the room immediately.

When the phone rings, Dick works through his pseudo-retro furnished apartment with his family to answer the call. He opens up Skype and we see the alternate version of Rachel and Gar, who are mostly calling for Johnny (which I will presume is the child’s name) and the status of his bunny lamp. Dawn explains how it’s cute beyond belief, and Dick explains how he saved it which Rachel replies with an eye roll before Gar talks Johnny through the naming process of his new stuffed tiger. Rachel and Gar are apparently in college in Chicago. Gar wants to spend Thanksgiving in California, and Dick and Dawn happily accept.

A strange blue wave washes over the scene of domestic bliss. Everything freezes as the music grows slower for a moment. Johnny is staring out the window and informs his parents someone is at the drive way.

Dick walks out to see Jason Todd in a wheelchair. Jason casually drops it’s been five years since their first encounter before explaining that Batman, of all people in all possible multiverses, is in trouble.

Some Thing Is Very Clearly Wrong in Paradise

Dick and Jason go to the back courtyard and catch up. Jason explains how he broke his back when he went straight at the Riddler, who conveniently learned how to use a gun. He continues the exposition by explaining how Gotham has somehow managed to get worse. The Joker kidnapped and killed Gordon, and Batman is finally ready to cross the last line he has. Alfred’s been dead for god knows how long, and the strain has seemingly gotten to him.

Back in the house, Dawn is prepping dinner while Dick rants and Dawn asks the armor piercing question: “Who else is available” and it’s a nonexistent list. Dawn wants Dick to reconcile with his mentor, but Dick decides to put it off until after the baby is born.

Another strange blue wave washes over everything. Johnny is in the other room playing with his toys as creepy music plays. Growly, the stuffed tiger, falls. Johnny stares intensely into the eye of the tiger. He then rushes to his parents and informs them that Growly wants to join Dick on his journey to Gotham. Growly’s gonna protect Dick.

As Dick traverses the streets, he calls Bruce on his cell as the typical hallmarks of sin litter the streets. Apparently every part of Gotham is a bad part of town these days.

Dick finds a hotel and saunters in. The front desk attendant asks if he’s staying hourly, and Dick explains he’s staying at the night. The attendant goes on to explain that it’s $55 for the night and an extra $6 for fresh sheets, cash only. Dick pays and makes his way to his room by stair. In room 309, Dick settles in to the less than ideally soundproofed room before pulling a MacBeth with Growly.

Yet another blue waves wraps reality, and the TV switches channel to a press conference with the new commissioner, who has permanently retired the Bat Signal.

Dawn calls Dick immediately. Dawn is taking care of a sick child and isn’t looking too hot herself. Dick decides to come home, but then we get another sound effect of a wave washing over and the next door neighbors get a little rowdy. Dick goes to intervene with a domestic violence incident in the room next door. He resolves the issue in three seconds before the cops come in. He begins to walk back to his room before he overhears a new police: 391 a.k.a. a special number reserved for masked vigilantes.

Dick makes his way to the crime scene where we see the Joker dead on top of a car. Dick just sort of shrugs and see his plane is boarding soon. Another wave, and a man materializes behind Dick. But it’s not just any man. It’s Trigon. Or rather, it’s Captain Frank Finney of Gotham PD. The captain asks if Dick has any insights, and Dick points to a building and Batman as the perp. The captain implores Dick to stick around and help close the case.

At that moment, the Joker jerks back to life and Dick Grayson realizes what he has to do.

Dick makes his way to and in the Wayne Manor. The place is abandoned. Dick navigates the house and plays some notes on a piano and tries to speak to Bruce through the secret wall. Dick explains that Bruce is lucky that the Joker is still alive, and relates his experience with Tony Zucco and Rachel to what Bruce is going through. Dick may have crossed that line, but Bruce has only danced around it.

The only reply is the ticking of a grand father clock. Dick walks away, and we see Bruce watching from the Batcave.

Dick makes his way to a prisoner hospital. He wants to check in on the Joker. Joker’s on life support. Dick doesn’t really get a second to process all of it because he’s greeted by a familiar face: Kory, who apparently has taken up in Gotham. Apparently Kory actually became a FBI agent.

The two engage in their typical banter, although Kory’s a little more bit dour and Dick’s not entirely sure if he’s pro- or anti-Batman. When Kory tells Dick to head home back to his life, another blue wave washes over the world. The hospital lights go dark and the sound of a brawl in a distance.

Dick rushes back to the hospital room, only to find that the Batman has defenestrated the Joker again. Before Dick can talk with his mentor, Bats flies out the window into the night. Dick is devastated and decides to take out his rage on the jerk in room 307.

When Dick calls Dawn in a rage, he overhears Hank in the background. Dick and Dawn have that rising tension, between Dawn having Hank over to help paint and Dick having to take a call from Kory. Kory’s call is short: Dick needs to get to Arkham Asylum. Things have gotten bad.

Dick is greeted to bodies and body bags. Hints of iconic Batman villains are scatted on the floor in blood. And then Kory explains that Batman didn’t stop at the inmates. Batman’s irredeemable at this point.

Dick Grayson goes to Gotham PD to speak with Captain Frank Finney and spills the beans: Batman is Bruce Wayne. This gives him enough authority to lead the operation: bring Batman in alive.

Cue the siege on Wayne Manor. Dick’s in the control room watching a small army perform a hard point extraction. Dick’s directing the action while trying to inform bats how this is going down. Gotham PD makes their way to the Batcave and they are quickly proven entirely worthless against a gives no fuck Batman.

Kory makes it to the massacre to find Batman and activates her powers. But Batman hits Kory with a cold gun and Dick blows the manor up in a last ditch effort to stop the Bat.

Dick begins rummaging through the wreckage. He finds Kory, frozen and on the floor. And then he finds Batman buried in rubble. And then Dick just gives the fuck up. He puts his foot on Batman’s throat and presses down. We hear a snap, and Dick’s eyes go demonic.

The camera goes 360 to reveal Dick is actually in the Roth House. Rachel is pleading for her guardian to wake up, but it appears Dick has succumbed to the darkness.

Trigon reveals that Dick “chose” this path of darkness, and now Dick’s part of the evil demonic family… End scene?

Oh wait. Post-credit tag. Somewhere in Metropolis… a “Subject 13” has escaped. He goes to retrieve a dog bathed in green radiation. When he breaks the cage, a familar scar is on his should. And the dog’s eye flash red and then the episode ends.

The inaugural season of Titans… exists. This is a show clearly designed with a larger myth arc in mind and the focus of this season was squarely on Dick Grayson, with spare energy foron Rachel, Kory, and Gar in that exact order. The show looks and sounds good. I have… many questions about the plot and precise direction of the show, lots of questions with few answers and the season finale has left me “whelmed” to borrow a phrase from a different DC Universe property.

But that’s it for Titans in 2018. Hope you enjoyed the ride.