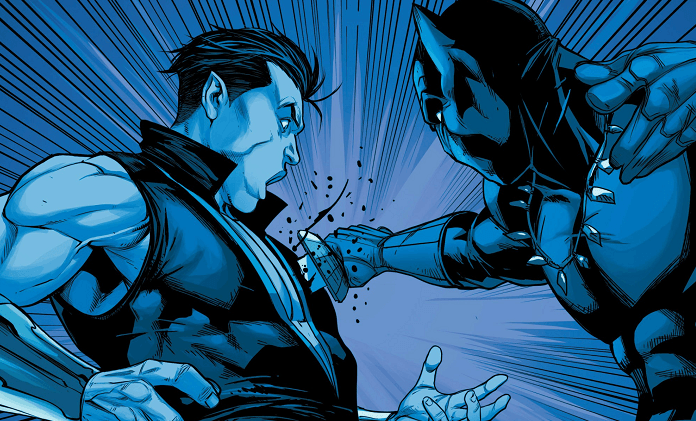 Since they couldn’t stop talking about the Avengers on Avengers crime in these Marvel streets, they decide to document their conversation.

Will: Off the top, let us pay our respects and pour out some salt water for the ankle-winged, super v-neck King of the Atlantic.

Omar: Aquaman said the funeral arrangements for Namor will be held at Joe’s Crab Shack off 4th Avenue and Smith Street. B.Y.O.B. (Bring. Your. Own. Butter)

Will: So let’s back up, cuz the fam been waiting for this shit since Namor gave the greatest city on Earth the “Noah Ultimatum” in Avengers vs X-Men.

People been waiting on him to catch those bars like The Walking Dead fans we’re wishing walker outbreaks on Andrea.

Omar: Namor been too comfortable in Marvel post-Fuck boy acts. He then proceeded to have Wakanda attacked AGAIN. Yo, his Atlantean / White privilege was on fleek. Meanwhile T’Challa was listening to Ghost of Christopher Wallace as his dad told him, “You best clap that boi.”

Will: Bruh, we gotta give the Lord and Savior Jonathan Hickman some credit, Da Gawd told us two years ago, in issue #2 of New Avengers this shit was coming. This was his Black Dynamite “I threw that shit before I walked in the room” moment.

Omar: I’m wondering how he proposed this to Marvel.

Hickman: Sooo you know your boy Namor, one of ya oldest characters, arguably the first mutant?…Yeah him. He goin’ be bait for Shark Week in this run.
Marvel: You can’t do–
Hickman: Shh–shh—shhhhhh. But I did and I will.

Will: I really hope that 20 minutes before the Marvel movie announcements, that there was one called “The Atlantean King” and Hickman picked up a phone dialed a number like…

Hey. Yeah, it’s Jonathan. No, don’t worry about the greeting, you didn’t know it was me. Anyways, that Namor movie? Yeah, uh-huh. Well, you might want to pull that one. I know you got graphics already and a date. I’m just telling you it ain’t gonna happen.

Will: Naw, I mean, he had one of the hardest moments in this run when he told Earth-4,290,001 it was time to pass the sticks, but who out there rockin’ #NamorWasRight shirts today?

Omar: Namor is going to be remembered entirely for how he died (for however long that is). He always says he did what had to be done which may be true, but that shit caught up with him.

Will: Yeah, let’s get into Avengers #40 one time, before Namor got a belly full of that Sleepy Time Tea. How dope was the passing back and forth of the King’s Blade? I appreciate Hickman sticking to the Chekov Gun theory where if you show a King’s Blade in the first act, you gotta jam it into a muthafucka and push him off a platform down to an exploding Earth in the third.

Omar: The play on the phrase that kept being repeated “It’s a blade for a king”. I kept thinking as in possession but in actuality it could be interpreted as a weapon for killing a king to crank that regicide.

Will: Jaime Lannister, favorite son of Wakanda. Though Shuri don’t play that shit.

Omar: This isn’t done yet because there has to be a scene where we see T’Challa explaining this plan to Black Bolt and Black Bolt agreeing. Black Bolt arrived with T’Challa as part of the game plan as well, so this had to be in play for dummmmb long.

Will: Yooooooooo, when Black Bolt jumped on the track, that was Kendrick walking into the street on the Nosetalgia video with Pusha T.

Omar: Black Bolt been waaiiiiiiitin’ to put Namor in his place. He hit him with the Mariah Carey then looked at T’challa like “Hey man, what you waiting on? WE GOTS TO GO!”

Will: Black Bolt hit Namor with that Aretha and then bounced knowing Maximus was on that planet too. Or did he? Black Bolt was cool with merkin’ his brother? I dunno, I guess we don’t know what went down when the Cabal came in 8 months ago and said Fuck Yo Couch, but still. He just put his kin on the exploding Summer Jam screen.

Omar: We’ve seen murder happen throughout Marvel but I can’t recall one where we seen a hero merkin’ another hero (both of whom are Avengers, no less). You know Steve Rogers goin’ say some American Judicial ass shit to T’Challa on this.

Will: And T’Challa gonna tell Steve to kiss his Kingly Black ass. Wakanda figured out how to disable guns years ago, you think T’Challa can’t figure out how to deactivate the nutrients in Rogers’ Metamucil? Sheeyet, Steve’s old ass better have a coke, an EKG and a smile and shut the fuck up.

Omar: T’Challa is nowhere in the wrong for this. After all that was done to Wakanda, and him not pulling the trigger on the Incursion…He is in no way wrong for his actions in the least.

Will: T’Challa just #PutTheBladeWhereItBelongs, fam. That’s it. If this were Florida and he was the White Tiger, this would be covered under Stand Your Ground laws. He had to do it man, he had Biggie, Pac, Big L, Jay Dilla and all the Panther Gods telling him he needed to get this shit done.

Will: Yeah man, feels so good for Black Panther to get back on this Murda Muzik. Don’t ever the say Da Gawd don’t make good on his promises. T’Challa, first Avenger to catch a body in 2015. The leadership we need and deserve in the two-dime, dime-nickel.

Omar: This is an act in which T’Challa is letting Marvel Universe know what Namor figured out way too late that: