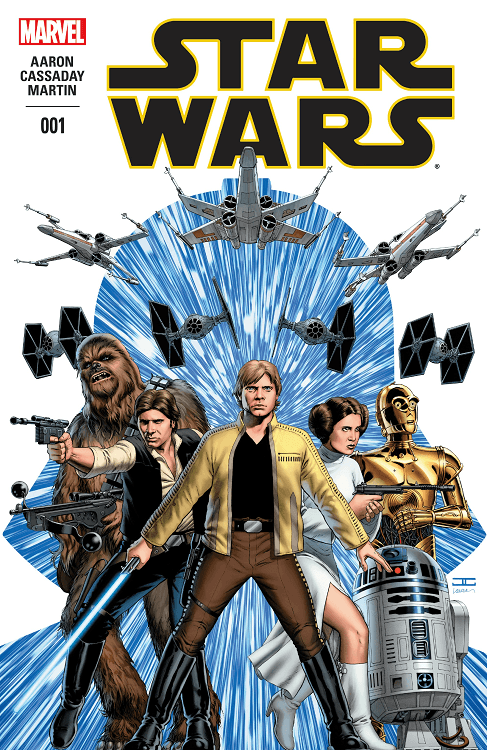 Once upon a time, Marvel churned out Star Wars comics not too long after “A New Hope” became a smash hit. The comics, taking place after the events of the first film, explored the SW universe from a slightly different perspective, unaware of Empire Strikes Back or Return of the Jedi. And things were good in the universe….awesome, really. Then, eventually, the rights went to Dark Horse and things stopped being awesome. But a lot has changed. Disney owns Star Wars. Disney also owns Marvel. The result: Star Wars comics are back where they belong.

Issue 1 takes place not too long after the Rebel Alliance destroys the Death Star. Our heroes, Luke, Leia and Han Solo end up on a dangerous mission to destroy a high priority Empire weapons factory when things, as they usually do for the Rebels, begin to go awry. Jason Aaron flawlessly taps into the heart of this cornerstone of nerd culture and spares no expense to deliver everything we love about it. For the first time in a long while, a Star Wars comic book delivers that same sense of nostalgic wonder we had when we first saw the movie. The Thor writer succeeds in marrying his witty dialogue and timing with old school swashbuckling, giving a tale we all know and love a new lease on life.

His voices for these characters we grew up come across pitch perfect and genuine as if “A New Hope” had only debuted in theaters yesterday. Nebbish, earnest Luke Skywalker is growing more confident, but still exploring the extent of his abilities and accepting the Force. Leia is still a bull in a china shop, not at all shy about having a bone to pick with the Empire. And, of course, Han Solo is still struggling to resolve his interest in helping the Alliance with his natural instinct to look out for Number One. But it wouldn’t work as well in such a unique manner if it weren’t for the artwork of the legendary John Cassaday. The thing that he really deserves a gold star for is the fact that he doesn’t just take these iconic characters and hermetically seal them as we remember them. He exalts them.

This is Cassaday’s A-game in a way we haven’t seen since maybe the first arc of Uncanny Avengers. With Episode 7 on the way, this is the perfect vehicle to not only reinvigorate old school fanatics, but create some new ones, too. And if the quality of the material remains this good, there will be no shortage of new converts chomping at the bit for more.

Bottom Line: Aaron and Cassaday are the perfect duo to man the Wayback Machine and give the Star Wars comics “that New Sci Fi Zeitgeist” smell they’ve needed for years. 9.5 out of 10.