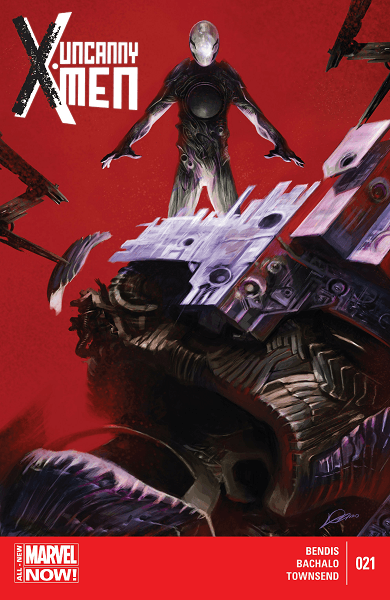 As a writer, I can always tell when another writer is on a roll. It’s safe to say that this month, Brian Bendis is on the aforementioned roll. Business has indeed picked up in both All New X-Men and Uncanny X-Men, each title its own delight with its own unique voice to be savored.

Without question, everything that can go wrong for the outlaw X-Men IS going wrong. Back at home (All New), the Future Brotherhood is beating down their door. Meanwhile, Cyclops and Magik’s visit to the Jean Grey School (those are ALWAYS pleasant in these two books) has not only been rudely interrupted by their powers going batshit crazy again, but by an untimely visit from S.H.I.E.L.D. with helicarriers and more ordinance than a visit to Chief Keef’s basement. Beast and Maria Hill in a staredown is a real treat. Now that he’s become a slightly more maudlin person during Bendis’ time on the X-books, Dr. McCoy has strangely become a much more entertaining character. Meanwhile, Magneto, who has now become the Punisher of mutantkind (if you’re not reading his solo book, you’re missing out on the best Marvel book that NOBODY is talking about), has made some interesting discoveries of his own. His scenes are easily the best in this issue….possibly of this story arc. Magneto as a vigilante murderer might be the most I’ve cared about Magneto in the past few years.

Chris Bachalo’s artwork is not missing a single goddamned beat, I tell you. With the exception of The Wake, I have not seen such vivid colors creating such creepy atmospheres. Magneto has never looked more sinister than he does holding scalpels to a man’s face. And if you needed anymore incentive, I have four words for you: Storm versus a helicarrier.

Bottom Line: Bendis and Bachalo are at their best or close to it in this issue of what’s turning out to be a full display of what makes this book so awesome. 9 out of 10.