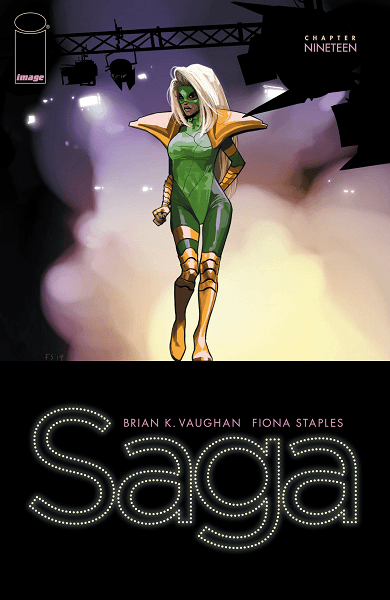 It’s been a while, folks. Break out the drinks and let’s celebrate: Saga is back and we can all enjoy the lovechild of both Brian and Fiona’s talents once more.

MY FEELS! Back in the Robot Kingdom, the Princess, wife to the (apparently missing, probably still knocked out of commission) Prince IV gives birth to their son. And just hold the phone— can we just applaud both Fiona and Brain?!?!? This freaking issue starts off with a panel of a woman, er, female robot in birth!

At this point in the game these two give no FCUKS and are smooth sailing. I can recall Fiona saying something to the effect that she and Brian weren’t sure that Saga would survive, as it wasn’t a comic featuring super heroes and there was plenty of robot sex. To start off this issue as it did just seems to confirm that these two have ARRIVED.

Some time has passed as our little family is tucked away in some corner of the universe away from prying eyes: Marko is taking Hazel, once baby Hazel out for a playdate. It seems that they’ve made it. They survived. They beat the odds. But in Hunger game fashion, let’s shoot off a cannon to all those we lost issues past: Marko’s father Barr, the cyclops novelist Mister Heist (also see: Marko’s soon to be step-poppa), The Will (in some fashion)…but Alana, Marko, a growing Hazel, Grannny aka Marko’s mother, Klara and our favorite sarcastic ghost babysitter Izzy are all accounted for and living (mostly) comfortable: (As you can see here. “Normal” is only a setting on a washer machine.)

And Hazel, the kid born of a union or two different species at war; a symbol that anything is possible, a symbol of what the powers that be want to wipe out is just thriving and bouncing around alive. A tiny tyke Hazel with her wings, horns, skin tone somewhere between both Alana’s and Marko’s is here to stay and safe for now. But just as Brian assures us that Marko, Alana and Hazel have made it….That this family that we’ve followed and stressed over are finally alright——we’re dropped a drama bomb. Or a “DRAAMAAAA~BOOOOMMBB” as LSP would say. Just can’t get no satisfaction, can we?

Final Verdict? Brian and Fiona are backing breaking hearts all over again while we keep giving them our attention and money, no matter how beautifully tragic the ride is. Neither one disappoints. Both brought their A- Game: Fiona Staples with the eye-catching cover (Come on, I know you were curious!) and Brian capturing the best of our little misfit family, leaving out no one. As with Saga, we’re once again, thrown on a roller coaster of feels, let’s hope we all survive the ride. A strong start back to this series, no matter how this issue ended.