Initially, Witch Beam’s new puzzle game, Unpacking, seems like an odd choice of subject matter. Moving into a house in a new location is a chore. Gameplay built around furnishing a home is the kind of material that Animal Crossing and those of its genre already seem to have on lock. Furthermore, the home and the objects placed within it aren’t even chosen by the player. So, what’s the draw?

The draw, surprisingly, is that hidden in Unpacking’s 2D pastel pixel art is a narrative version of the suitcase from Resident Evil 4. That installment of the franchise featured a distinct upgradeable storage system, where maximizing the space within the suitcase became a game unto itself. The player could fit only as much as the interior grid of the case would allow.

In Unpacking, the metaphor of the suitcase has become a series of rooms, each inhabited by an unseen protagonist at different stages of her life. Starting out, the player decorates a child’s room by placing toys, games, and other items on shelves and any available non-floor space. The game encourages play with intuitive controls that let you rotate or activate each item.

This healthy lack of tutorialization allows the player to explore their capabilities, limited only by the rooms they’re working in. A click opens each box, and in succession new keepsakes are drawn out until the empty box disappears with a satisfying pop. The unpacked pieces can be rotated to fit a space or stacked if of a similar type.

All That You Can’t Leave Behind

The only major restraint against progression is that improperly placed items will be highlighted along with the room they should be moved to. While this can become an irritating hindrance, it weirdly influences gameplay by turning Unpacking into a quiet psychological profile. The way players choose to furnish these spaces tells as much of a story as the pieces themselves.

Are you the type to pack with a plan, or toss stuff wherever it fits? As you play, the games challenges will shift you between these types. At times, you’ll be piecing together sets of items from boxes scattered across in multiple rooms. It’s an incredibly relatable consequence of hitting that moment of ‘fuck it, I’m putting these things wherever they fit.’

Despite the game never speaking a word it’s infused with character like this. The stuffed plush pig mascot survives from move to move, popping up as part of the bedroom set. A framed degree struggles for adequate display space once the character moves out of their college dorm — which feels like subtle commentary. That’s not even counting working around the existing furnishings of other roommates.

As a quick and relatively light experience, Unpacking is best taken in short sessions. Regardless, it holds surprising depth (and a lovely chiptune soundtrack). Curious players will find achievements for item placement and interactions. Witch Beam has brought a satisfying emotional connection to one of the most exhausting experiences of adulthood. 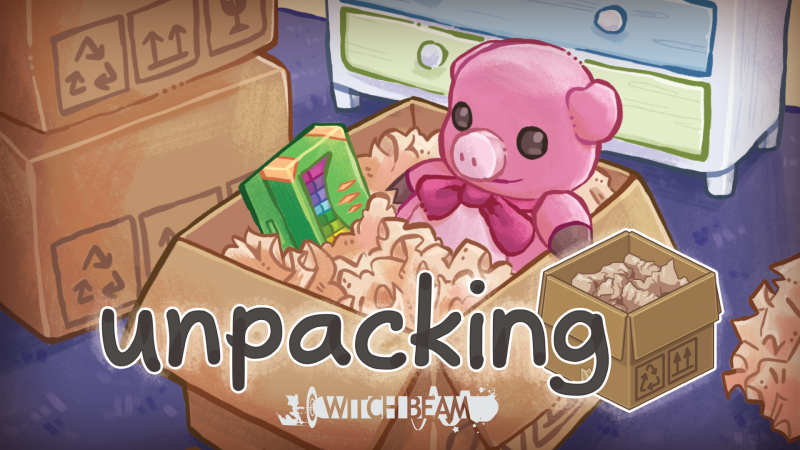