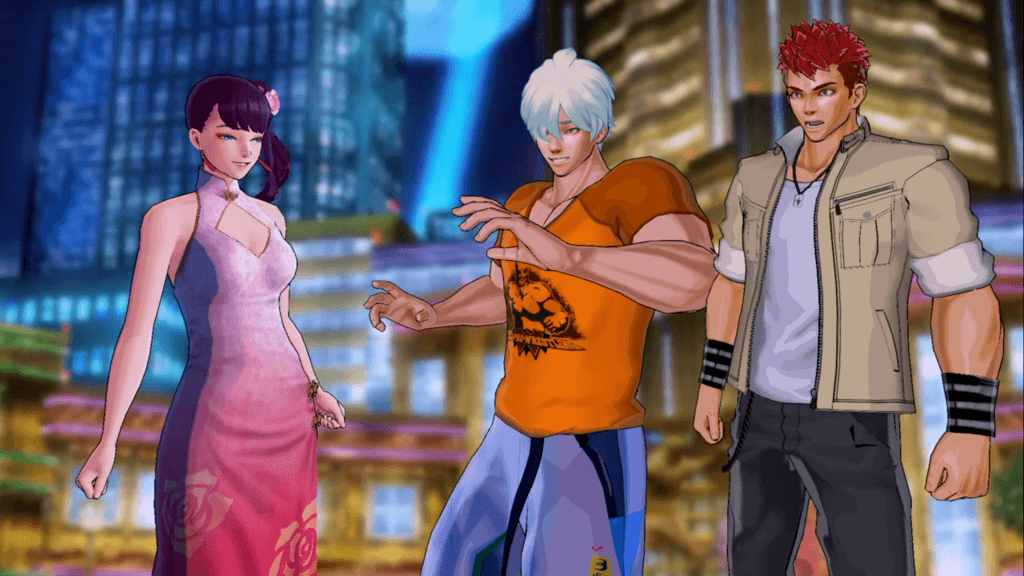 Fans of anime and anime-influenced media outside of Japan are eating better than ever. As widespread a phenomenon as it has become, however, judging otaku as a single body is a mistake. The fandom is a faction of factions and trying to cater to all means that some are bound to slip through the gaps between. This describes niche titles like Uppers: a Japanese 3D beat-’em-up Playstation Vita exclusive. Two years and a PC port later, the game has a chance to show a wider audience what it has to offer.

What Uppers brings to the table is anime tropes, and all that implies (for better or worse). Its two main characters are Ranma Kamashiro and Michiru Sakurai, who embody the ‘hot-blooded youth’ of shounen archetypes. They’ve arrived on the fictional island of Lost Resort to prove their fighting skills by swinging on anyone within arm’s reach. To keep this goal interesting, Uppers enhances its combat with a number of gimmicks.

Shout out to the UI element placement.

Dunking foes through basketball hoops or uppercutting them into passing helicopters makes clear that the game doesn’t take itself seriously. Combat fills the ‘Voltage’ super meter and using a segment of it blows back enemies. This also launches the game’s signature “Upper Rush,” unleashing a button-mashing cutscene beatdown on whoever is unlucky enough to catch a combo string. With both Ranma & Michiru playable from jump, tagging in another character during the attack yields bonus damage.

Aside from combat, Uppers’ other central gimmick is its reward system. In the game’s own words, our protagonists fight because ‘girls are watching.’ Strewn throughout each level are clusters of young women watching from the sidelines, cheering on every act of violence on the streets of Lost Resort like a passing parade. Each group has an objective for the player to meet, like defeating enemies quickly or using a specific attack. Once completed, the lead girl of the group will offer you a love letter. This will unlock her information and character model for viewing, along with more…intimate details.

No one plays games like this for their subtlety.

Yeah. Uppers is one of those games, and this aspect of it refuses to be ignored. Low on life during a fight? Combo near the girls to flip up their skirts, because they are always wearing skirts. This sets off a panties-matching roulette minigame, bestowing health or a stat buff. Purchasing clothing for the characters to wear? The primary currency of the game, ‘Love Points,’ are acquired from impressing girls. Even the resurrection action during combat involves an involuntary face full of cleavage.

Uppers does attempt to address its heavy fanservice between their head-on collision of shonen and harem anime tropes. The first few chapters of the game add a breakdancing b-girl and what looks like a genderswapped Jojo’s Bizarre Adventure to the roster of playable characters. Other more plot-specific women are ‘Support Queens.’ Each woman has their own chapter-specific storyline, but the closest they get to autonomy is granting the player in-game bonuses while cheering for them.

It only gets worse from here.

It’s clear that Uppers knows what it’s doing. The production team includes an artist from the King of Fighters series and the creator of the Senran Kagura franchise, which makes this look tame by comparison. Unfortunately, what the game does isn’t executed particularly well. Looking past the hollow novelty of the harem minigames, the port of Uppers is unstable at best. The shounen-style combat can’t hide its dated PS Vita visuals, and fighters often lock up during combat animations despite continuing their motions.

This is assuming that the game doesn’t crash outright before encountering any of these issues. These problems alone don’t make Uppers unplayable, or even bad. Its attempt to serve two masters, however, holds back either piece from being anything worth recommending. On the whole, there are better brawlers than this two-year-old handheld port of a mediocre beat-’em-up. As for the other part of Uppers? Well…you’re reading this article on the Internet. Taking care of that sort of thing is just an incognito tab away.

6 out of 10 Helicopter Uppercuts