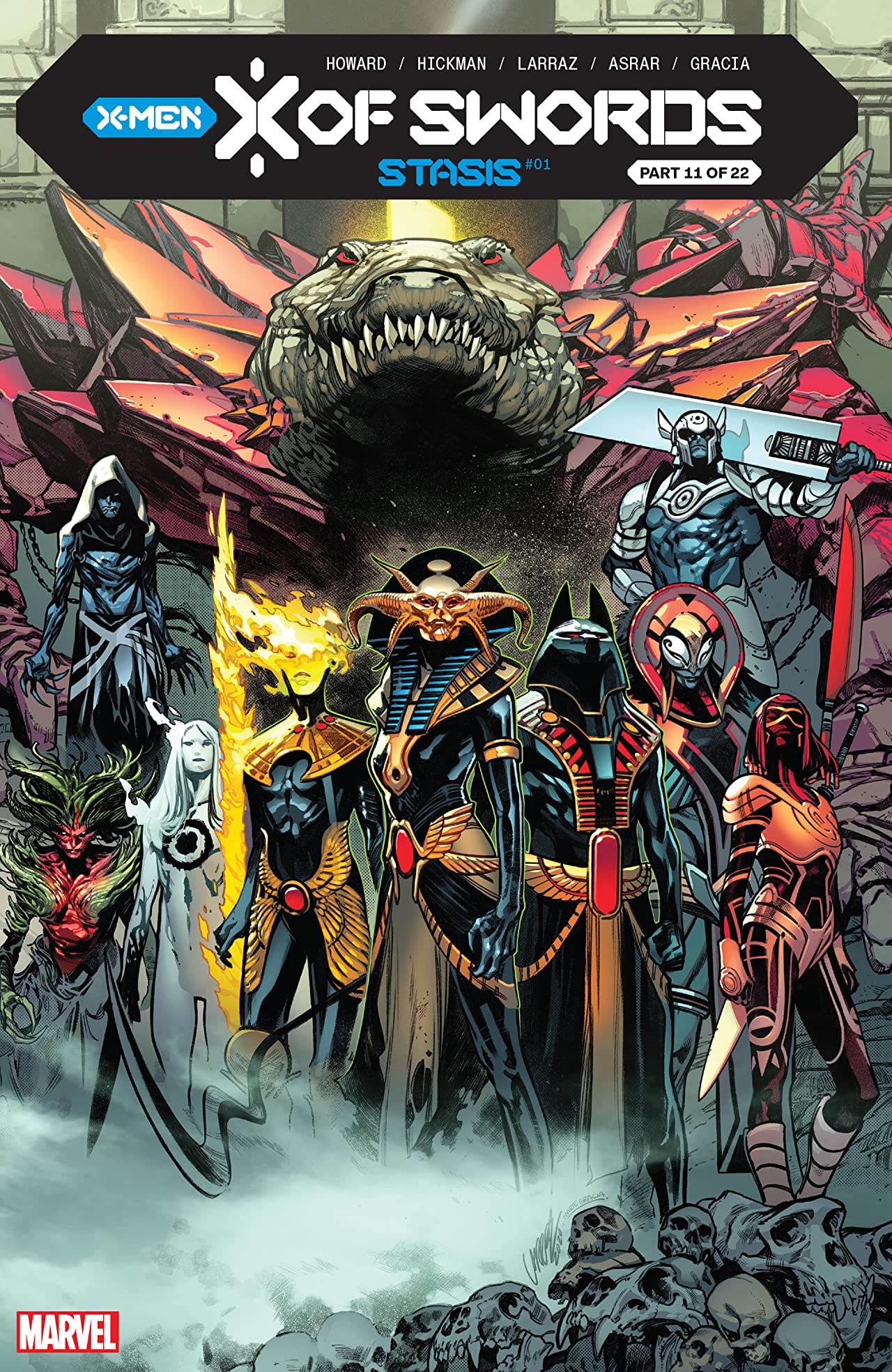 Thus far, the X Of Swords event has proven to be an audacious, dense tale that delves into the secret history of mutantkind to ponder what its future will be. Jonathan Hickman is undertaking the rather daunting task of crafting a whole new mythos for the X-Men universe and this event is something of a progress report, highlighting how it’s going so far. Parents know any good progress report showcases the pros and cons and causes conversation about whether the child in question should keep up the good work or shape up a bit. That said, there’s plenty to be said about what’s awesome about Hickman’s that is plainly obvious in X of Swords: Stasis #1.

The lion’s share of this book takes place in either Otherworld or Arakko, taking a look at how it’s going with Apocalype’s estranged children and their campaign to win this tournament of swords against the X-Men. Hickman and Tini Howard do a pretty good job of delivering a little more insight into what it takes for our villains to unite against the citizens of Krakoa. The backstories hinted at and played are mostly fun as they wet our appetite for what’s to come from this event.

The Arakkoans are quite frankly morbid and odd and really enjoy hearing themselves talk, but maybe that’s what’s so fun about them. They represent a break from the X-franchise’s most popular villain: ideology. A lot of X-Men villains are defined by how they view mutants. It’s nice once in a while to have bad guys that are incorruptible because corrupt is the starting point. They just want to conquer and kill. With that in mind, I wish there were more connective tissue between this dark era of seemingly immortal mutants whose powers are almost inconsequential  and the current Krakoan nation for the sake of emotional resonance (aside from Apocalypse’s obvious involvement). But it’s obvious that Hickman’s long game reaches much longer than what’s taking place in X of Swords, so it’s entirely possible that’s on the way.

It’s worth mentioning yet again that the Hickman run is proving to be dense. And although I have been thoroughly entertained so far, I question the effectiveness if one book summed up one faction assembling its army where it’s taken the X-Men nine issues to get their ducks in a row. Stasis #1 is a good example of how much plot can be packed into any one X-book nowadays and that can be an intimidating plunge for some readers. Mahmoud Asrar and Pepe Larraz are two of the best artists this run could ask for and to have them collaborating on this particular book is a godsend. Aside from Lenil Yu, nobody else is this effective in creating these evocative scenes and epic moments that resonate even when there’s little or no action taking place. I don’t think I’ve ever read a comic where I felt genuine emotional conflict looking at Apocalypse until this one. That alone speaks to the level of detail in every panel.

Bottom Line: Much like a majority of the books within the current line of the X-Franchise, this one covers a lot of ground, but is fundamentally strong enough in its execution that it’s a mountain of material worth climbing.

8.5 half smoked Wolverine cigars out of 10