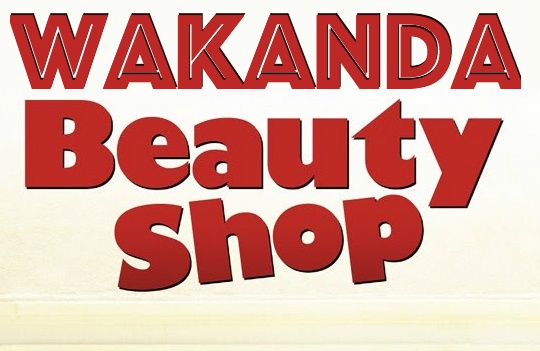 Welcome to the Wakanda Beauty Shop, started by the sister of the owner of the Wakanda Barbershop. Here we get to see your favorite Black Marvel characters, as well as other characters of color, be self-aware and talk about what’s going on in our timeline of reality and their fictional 616 Marvel universe. What better place to hang and vent than the best beauty salon on Earth, located in Wakanda? It’s so popular that characters from other comics publishers are allowed to stop in. Even characters that have been in limbo for years can be spotted in the Wakanda Beauty Shop, “Where That Atmosphere Be So Black, Too.”

Shuri and Okoye are sitting in the front of the salon while the shop owner, Aretha, retwists Ramonda’s locs in the back. As a security precaution, the shop has been cleared of other customers with Ayo standing out front. The bell above the door rings and just as Nakia walks in, all the women in the shop stop in their tracks.

Nakia: [Frowns, then rolls her eyes and sighs] This is getting old.

All in unison: I never freeze! [breaking out into laughter]

Nakia: Are you ready for our training session?

Shuri: Give me a few minutes, I’m still waiting on—

One of Shuri’s kimoyo beads lights up. A hologram of Riri Wiliiams aka Ironheart floats out of the glowing sphere.

Shuri: Oh, right. Hold on just a second and I’ll send you the exact coordinates. The signal should be stronger now that you’re inside the border. [She performs some quick sign language and a beeping sound is heard]

Riri hologram: Got it, thanks! Be there in a sec. [The hologram floats off]

Okoye:[shifting as she leans against the wall] Who was that?

Shuri: [brightening] Oh, that’s my friend I met online. Her name is Riri. She’s working with me and another girl on a little side project to create a version of the world wide web just for Black women. I’m calling it the Bon-net for now. [Shuri’s eyebrows raise in anticipation as she grins widely but Okoye seems unamused so she turns to Nakia.] Anyways, our friend Lunella isn’t old enough to travel to Wakanda on her own yet, so it’s just the two of us today. I thought she’d get a kick out of our training

Shuri: You’re telling me! It gets boring making the same stuff for T’Challa over and over. Like just yesterday Riri bet her whole gif folder that I couldn’t make a robot suit like hers, but I’ve been working on five, and when you press a button they all come together and—

The bell on the door ringing interrupts her as Riri walks in.

Shuri: Riri! [The two embrace instantly with huge smiles] Took you long enough. Must be a delay on those rusty rockets of yours, eh? Everyone, this is my friend Riri. [She turns to the group as everyone introduces themselves]

Riri: [Waves, but giving Shuri a competitive smirk] Well, I didn’t expect Wakanda to still be running on 7G. [She looks around her]. Wakanda Beauty Shop, huh? This looks amazing. If I were you I’d be in here all the time changing my look up.

Shuri: [shrugs with a teasing smile] I don’t really have to [Suddenly her hair shifts from braids wrapped in buns to coils with silver bands and then back again to Riri’s surprise]. Nanite braids. But shh, don’t tell anyone. It’s still in development.

Riri: [Impressed] Okay, I have to give you that one. Beats the time I tried to tweak Monica Rambeau’s relaxer for sure. [Riri and Shuri both make “yikes” faces in unison] Don’t tell me you have something that could get these baby hairs to lay down, too?

Shuri: [grinning] We can do better than that! [calling to the back] Auntie Aretha, how are you doing on your supply of the hair oil I sent you?

Aretha: Think we’re running low now that you mention it.

Shuri: [turning back to Riri] I’ll have to show you later, then. It’s all one plant, actually. Part argan, part coconut, part olive, part shea. Nut bad, right? Get it? Nut ba—

Riri: [good naturedly rolling her eyes] I got it.

Just then one of Okoye’s kimoyo beads lights up. She moves to answer it, suddenly regards it with suspicion, and ignores it.

Shuri: [leaning over and whispering behind her hand to Riri] Bad break up. W’Kabi had to move all of his stuff back to the Border Tribe village with his mother before being sent to intensive counseling for treason. [snickering] I heard he had to walk the whole way after Okoye kept his rhino.

Okoye’s kimoyo beads light up again and this time she gets up quickly and walks to the back of the shop as she answers it.

Okoye: [Bowing as she passes Ramonda] Excuse me, I shall return quickly, Queen Mother

Nakia: [trying to repress a smirk as she watches her leave] Must be M’Baku

Shuri: It’s so cute, though! You should see all the little requests she’s been putting in. [imitating Okoye] “My Princess, would it be possible to design a coat that matches my armor? No, with faux fur.” “Oh, Princess, about those extra kimoyo beads…” “Princess, do you know if our signal can reach the mountains?”

Ramonda: [from the back wryly] Shuri, I’d watch your voice. Aretha and I can hear you all the way from back here.

Nakia: Well, now that your friend is here we should be going anyways.

Shuri: [rising] You’re right. Riri, I can’t wait until you see the holographic Hazard Chamber I designed. I was going to call it the “Danger Room,” but my brother said I might run into some copyright problems according to his new— ah [her eyes flick over to Nakia and back] friend.

Nakia: [waving behind her shoulder as she opens the door] Old news, Shuri. Come on, we’re going to miss the train.

Riri: [as she exits with them] See, if you had some “rusty rockets” you wouldn’t even need to wait on a train…

The shop returns to a comfortable silence, Aretha humming gently as Ramonda sits dozing lightly. Okoye returns, looking around with a frown.

Okoye: Ah, they left already. I was going to ask the Princess for… [she turns to Aretha] Ah well. It was getting noisy anyways.

Aretha: [smiling a bit] A crush will do that, you know.

Aretha: Oh, nothing, just a hunch. [teasing] Now pull up a chair already and quit hovering, Okoye. You make an old lady nervous standing that way, and nervous hands ain’t no good when it comes to shaving that bit of fuzz you got creeping on the back there. Or did you want that bit to keep you warm the next time you visit the Jabari Lands?

Okoye: [chuckling lightly and taking a seat beside the two other women] No, ma’am, I wouldn’t want that.