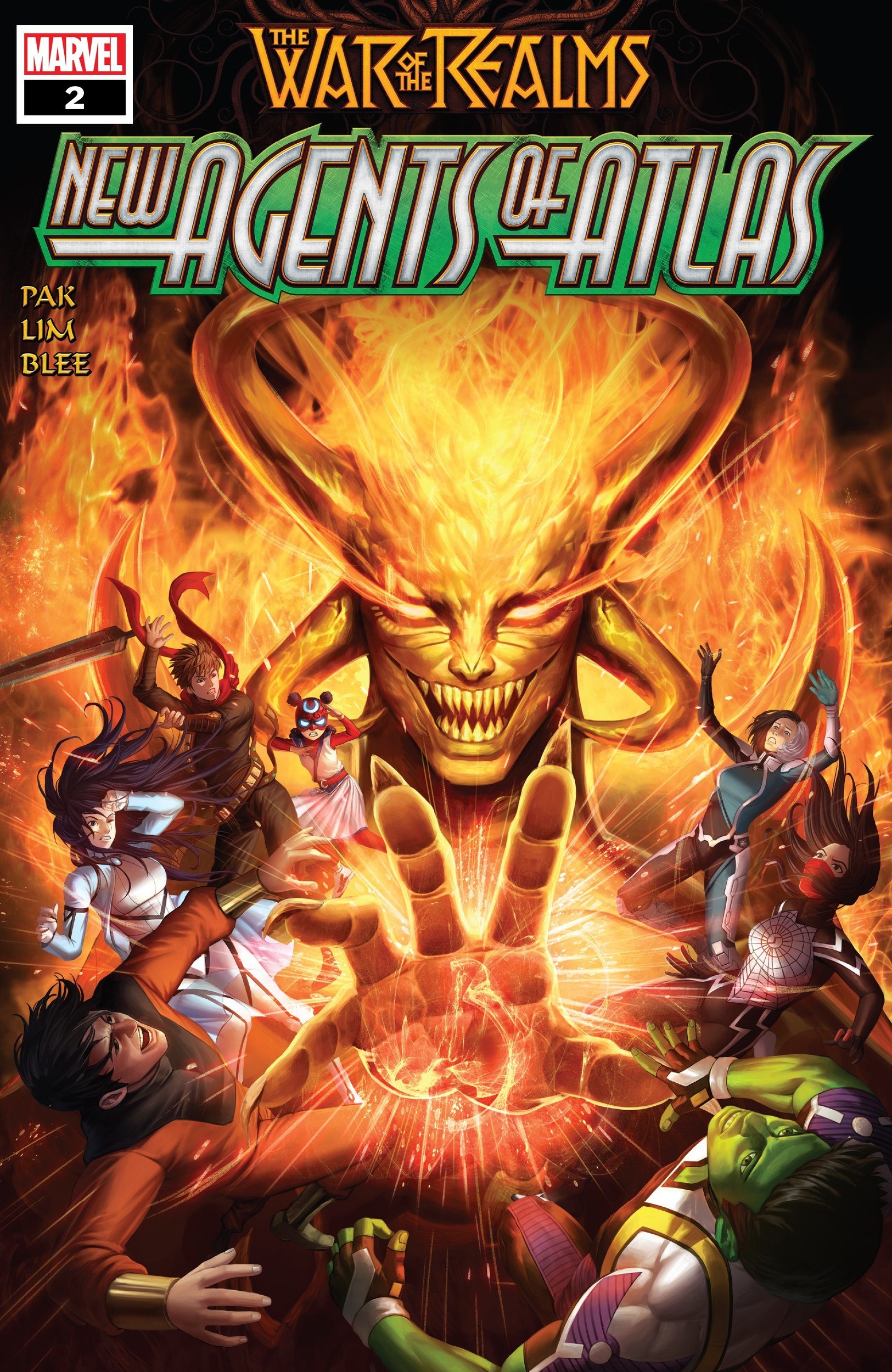 If I had to describe my state of mind after reading War of the Realms: New Agents of Atlas #2, it would probably be along the lines of joyful or ecstatic: that type of full body happiness where you notice that you are smiling ear-to-ear and sitting up just a little bit straighter at attention. The inaugural issue of the mini-series was a rapid-fire introduction to all the players in this event. Greg Pak and Gang Hyuk Lim keep the momentum going by giving us the first American appearance of Sword Master and a proper introduction of Pele, Hawaiian Goddess of Fire and Lava, alongside Aero and my current favorite hero, Wave. Pak and Lim take all of this hype and carry it full steam ahead throughout the entire issue.

Picking up where New Agents of Atlas #1 left off, we find our favorite Asian and Asian-American heroes fighting a battle on two fronts: Shanghai and Seoul. Supernatural creatures have invaded both cities and our heroes are doing their best to protect civilians in beautiful form. Pak’s humor and dramatic writing skills, alongside Lim’s magnificent renditions of the heroes, allows us to further endear ourselves to them through simple quips and jaw-droppingly gorgeous panels. 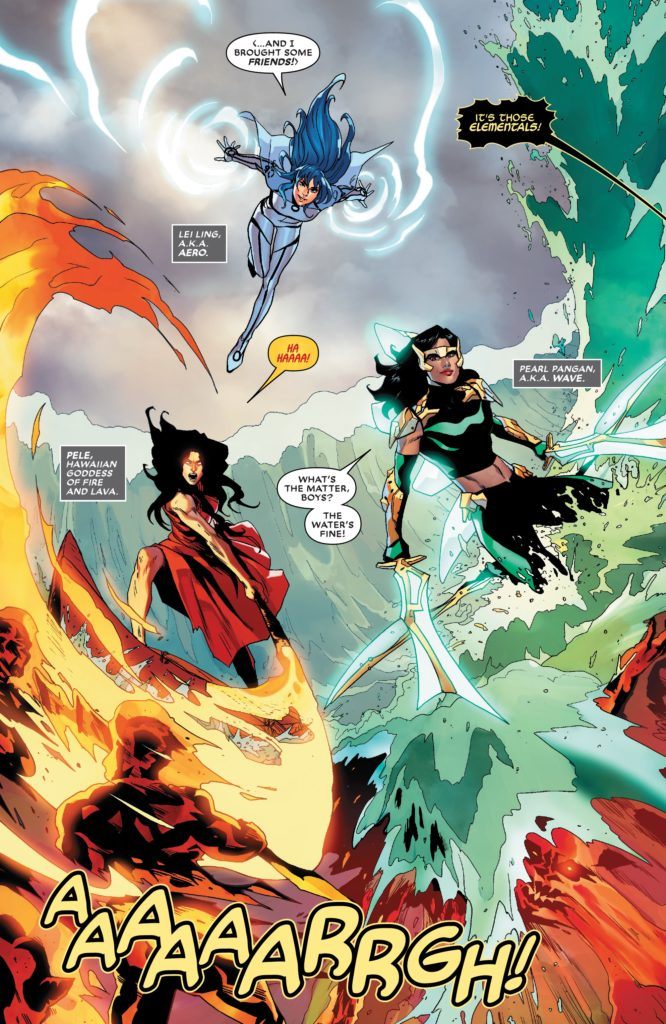 We may not know these heroes but, based on how the background characters talk, there is clear mystique and legend surrounding them. We don’t need to know more beyond the fact that they are here to try and save the day from this supernatural threat. The action scenes are incredible, and each skirmish with Sindr’s forces drum up the pace to Amadeus Cho’s eventual gambit.

Throughout the text, there is a thematic note of “we have to work together”. It’s this simple, honest truism that breathes life into the book. The sentiment works because we see different fragmented coalitions doing their best, yet every page reveals that no one hero can solve this cataclysmic event. It all builds up to a grand, climatic moment fitting for the halfway point of the mini-series. 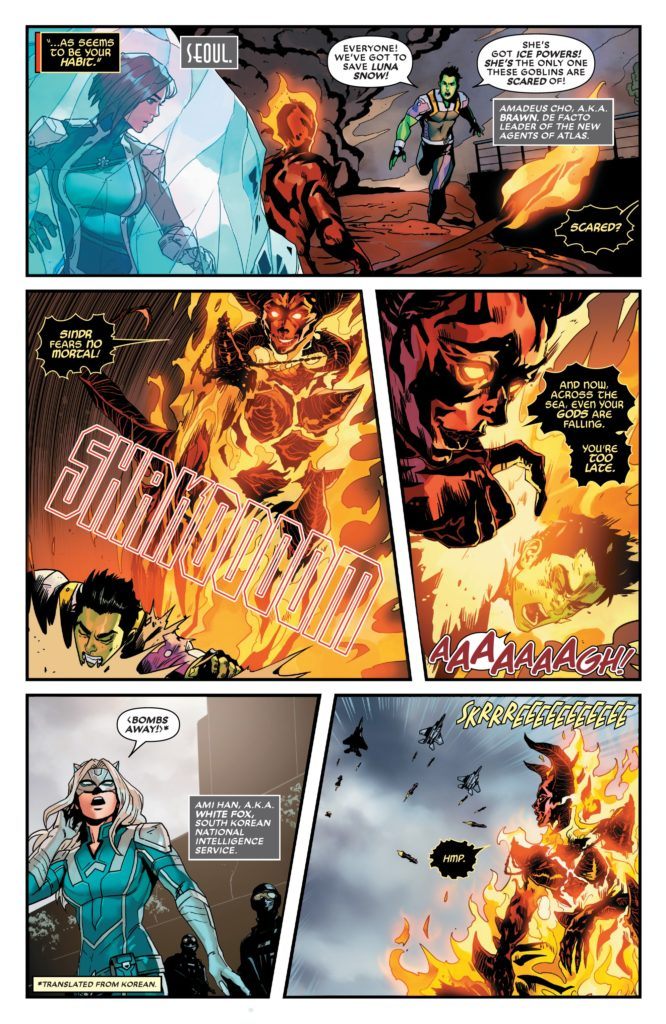 I have no idea what’s going on with the rest of the War of the Realms. Honestly, I don’t care. I do care deeply about the New Agents of Atlas and the beautiful character and narrative work that Pak and Lim are doing to bring this diverse cast of characters to a local comic shop near me. I do care deeply about the small interactions between heroes punctuating the grander scheme of a cosmic war being waged on earth. I do care about this series so much, and that’s more than enough for me.

Reading War of the Realms? Find BNP’s other reviews of the series here.