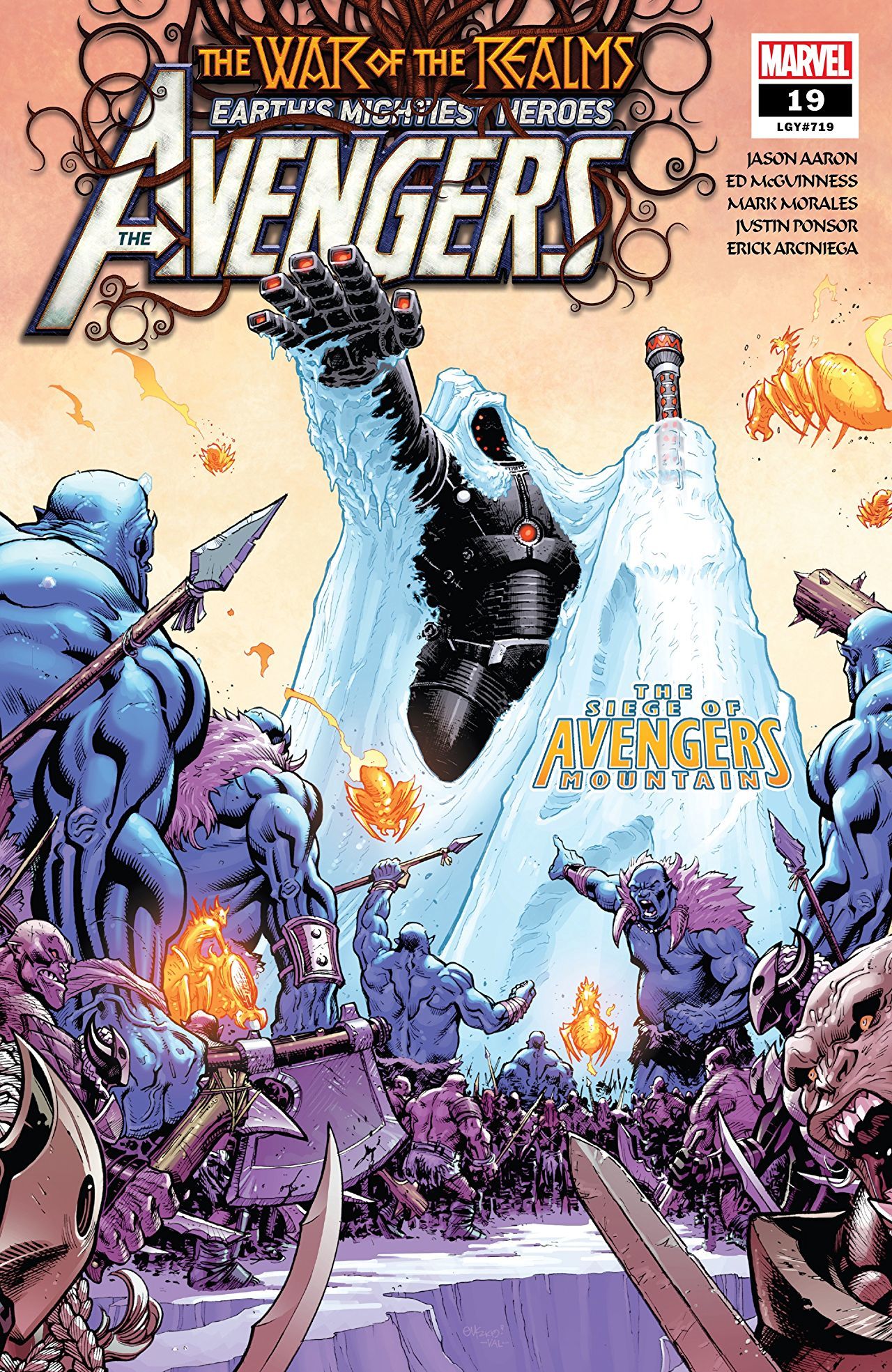 The War of the Realms has reached Avengers Mountain, which is of course the corpse of a space god. This is Jason Aaron’s event, so no surprise there. I haven’t been keeping up with this, but I got the general idea: an army of Asgardian evil is invading all corners of the Earth, forcing our heroes to don badass battle gear. After the previous War of the Realms tie-in issue didn’t address our new Avengers team at all, I wasn’t sure what to expect from this one. 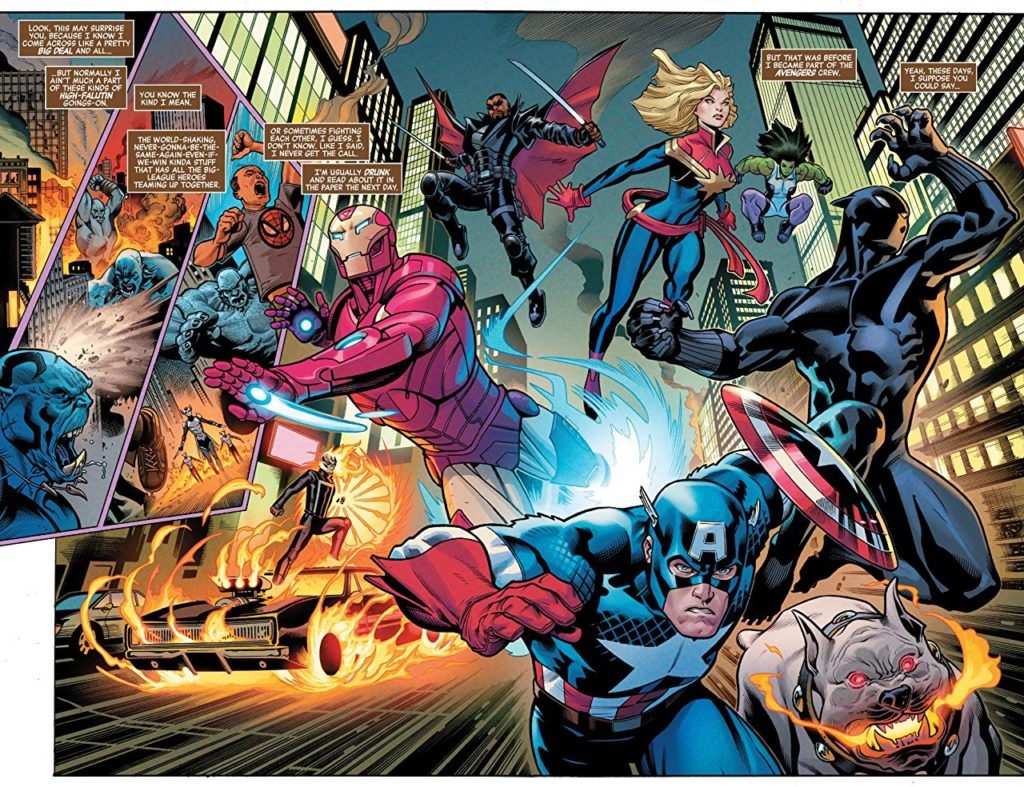 Aaron gives us a lot of breathing room with these tie-ins. They describe the events in the main book just enough to inspire curiosity in the main series. During the last two comics, though, they serve to introduce new players while moving the existing ones around in anticipation for the next few storylines. The issue opens with two obscure characters Aaron has brought into the fray: Gorilla Man (a.k.a Ken Hale) of the Agents of Wakanda, and Ursa Major of the Winter Guard. The two exchange information about the events of the last story arc, talking like old friends if one of them had found a dream job and is trying not to backslide into old ways. Gorilla Man goes on to narrate a beautiful, gruff ballad to a few of the Avengers while he receives and executes his latest charge. As head of security he needs to prepare the Avengers Tower for an incoming invasion from the armies of Malekith, King of the Dark Elves. He goes on to sing the praises of Captain America and Captain Marvel. In the process of fortifying the headquarters, Hale has an otherworldly experience. Afterwards, he makes a decision that promises major repercussions in the future. 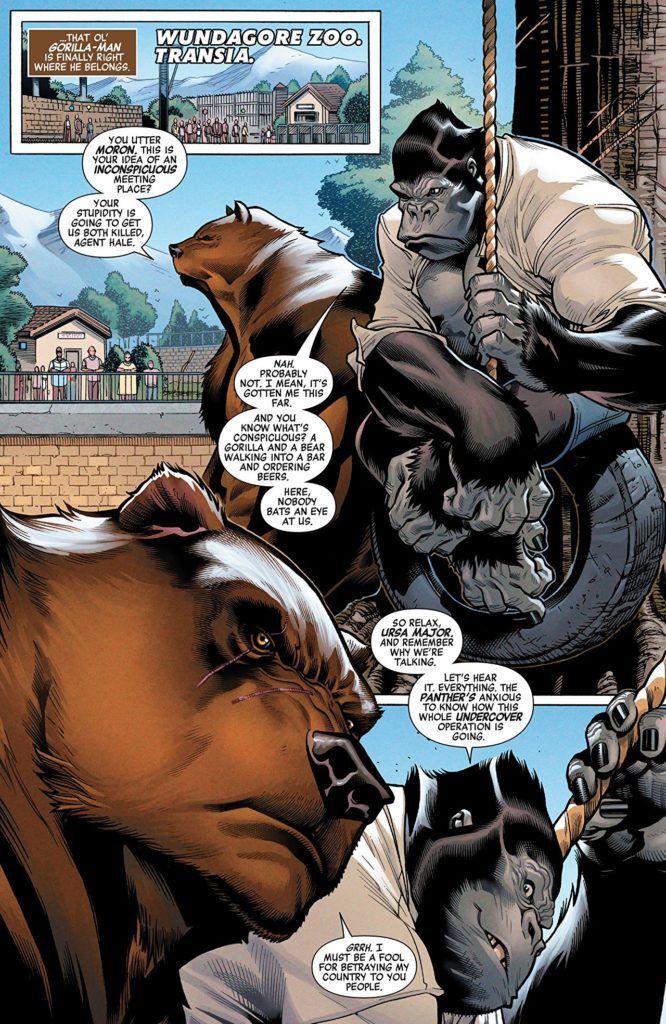 I give Aaron a lot of credit for the web of characters, teams, and motivations that he’s creating. The Winter Guard, the Legion of the Unliving, and especially the Agents of Wakanda have provided a variety of possibilities Aaron is looking to explore. I can only imagine that this book has been designed with years of plots in mind. I adore it when a minor character is focused on to move the story along. Let’s not forget what a giant like Ed McGuinness can do with such a dynamic book. There are some great shots, including Luke Cage with a battle hammer and Carol Danvers flying alongside a flying boat. Depending on who’s drawing the rest of the War of the Realms books, I may have to pick the series up.

9 “Black Panther Murder Stares” out of 10