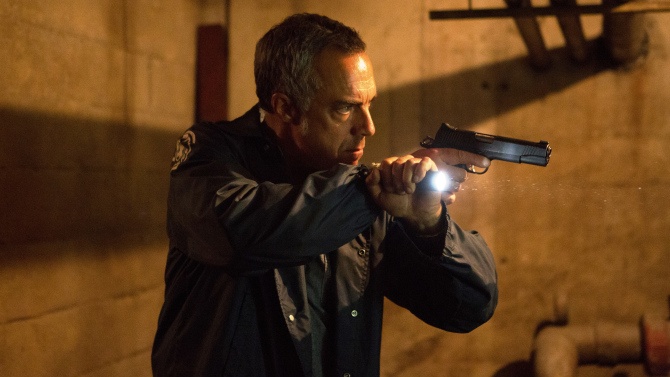 If you have Amazon Prime (and yo, you should totally sign up for Amazon Prime if your budget allows it), then you’re familiar with their Pilot Season. Basically, Amazon gives you a handful of TV show pilots, lets Prime customers watch them all and then vote on what shows get a full order. Now, there are sources out there that say the process is a bit dubious and that Amazon knows exactly what it wants produce, but it’s at least a unique way of dealing with pilots and how television works. The point being, if a show does get the golden ticket via this process, the pilot is often aired and viewed much earlier than the rest of the season (or series).

Bosch, a show executive produced by the author of the Henry Bosch novels Michael Connolly, was part of the pilot season in early 2014. It didn’t “win” the Amazon pilot sweepstakes (Golden Globe-winning Transparent did), but I was drawn to the show for various reasons. I’ve read just about all the Henry Bosch novels and most of the Mickey Haller books (brought into over-the-top glory by Matthew McConaughey in The Lincoln Lawyer). With Titus Welliver, who has been such a good character actor for so long, stars as the titular hero Bosch, flanked by Wire alums Lance Reddick and Jamie Hector (Marlo Stanfield went legit!), this show immediately had my interest.  The pilot, like most pilots, wasn’t that great, but I would’ve loved to see more of it and was disappointed it didn’t win. Amazon must have felt the same way, because they soon after announced a full season of Bosch anyway, which landed on Amazon earlier last year. So happy ending for me, right?

The pilot for Bosch loosely follows Connelly’s novel City of Bones as its main plot, but begins with Bosch tracking a suspected serial rapist and murder. When Bosch follows him into a dark alley and forces him to surrender at gunpoint, the middle-aged Latino man complies at first. Then, while on his knees in surrender, appears to reach for a weapon before Bosch fires a burst of shots and kills the suspect. The preliminary hearing involving Bosch’s actions take up a lot of air in the pilot episode and expand more in the subsequent hours. They all involve words like “clean shoot,” “K(ill) party,” “I was just doing my job,” and “cleared of wrongdoing.” Spoiler alert that isn’t really a spoiler because this is TV, but the jury finds in favor of the plaintiff (the victim’s wife) for the startling amount of $1. Which means they agreed that Bosch broke some rules and procedures (like calling for backup), but didn’t find him guilty of wrongdoing in the actual killing of the suspect. Feel icky yet?

This first episode originally debuted in February 2014, but the full series (including that first episode) became available one year later, February 2015. I’d say the attitude towards cops and the shooting of suspects has changed a lot since then. Eric Garner was killed on July 17th, 2014. Michael Brown was killed on August 9th, 2014. Darrien Hunt was killed on September 10th, 2014. [quote_right]Could I even make it through a full season of The Shield now, even though it was one of my favorite shows of all time?[/quote_right] I could, sadly, do this all day. I’d say the attitude towards cops and the death of suspects has changed a lot since then. Police shooting and/or killing people of color did not become new in the long summer and fall days of 2014, but it did reach a saturation point where it wasn’t fit for cavalier conversation or casual entertainment anymore. Watching a “play by my own rules” cop go off the reservation, ignore procedures, and not be afraid to use lethal force on a suspect used to be a staple of gritty crime dramas and procedurals. Now it just feels like glorification of the pain of a community. It’s like spiking the ball in the end zone (which is basically the literal translation of the “kill party” after a shooting referred to in the show or a cop sing-along celebrating the death of Mike Brown). It’s not apples to apples specifically for Bosch, per se. He’s not Walter White, as in he didn’t shoot an innocent man or plant a weapon on him. But it all SOUNDS awfully familiar for real world circumstances that don’t have the same cut and dry factors as this fictional TV drama. My point is that Bosch is a good show, not great, and seems to be popular enough among TV circles, so it doesn’t seem to be suffering the same type of social commentary that has dominated the conversation pertaining to police and excessive force.

But what do I do with my new feeling of guilt or unease in watching one of the most popular character traits in popular shows (also asked by fellow TV enthusiast Scott Woods)? Could I even make it through a full season of The Shield now, even though it was one of my favorite shows of all time? What do I do about my favorite gunslinger Deputy U.S. Marshall Raylan Givens on Justified who will put down a man as soon as smile at them if he feels cause? Or do I feel differently because Raylan almost exclusively shoots rural Kentucky white dudes that are largely defined as bad guys before his glock is drawn? If you were among the legion of The Wire fans that joined in on the marathon over Christmas, how much harder does Pryzbylewski shooting a plain clothes Black officer hit you than when it aired in the early 2000s?

Life doesn’t just doesn’t imitate art, sometimes it informs art for the consumer. I can’t say I wouldn’t be watching Bosch if it weren’t for the multiple factors of personal interest that draw me to it. But I am saying that my viewing experience of cops that make questionable decisions, are involved with fatal shootings, and get exonerated for it, is forever changed now. Most times, TV is supposed to be an escape from some of the difficult realities we endure each day, not necessarily a reaffirmation of those painful narratives.