Stephen Amell gotta pass the sticks. And he knows this. Now. The star of Arrow, arguably one of the most successful comic book TV adaptations of all time, said some dumb shit in regards to the very public disciplining of Ahmed Mohamed.

If you were too busy gearing up for the Republic debate on Wednesday and stayed off of Twitter for spoilers (Spoiler Alert: Donald Trump was an asshole, end Spoiler Alert), then it’s possible you didn’t catch the story of a 9th Grader who built a clock at home as part as an assignment for his engineering class. When he brought it to school, his teacher looked at it, had concerns that the thing one tells time with could be a bomb, and called the police, who in turn arrested Ahmed. In good ole Irving, Texas, just outside of Dallas, Ahmed was handcuffed, taken into custody, and interrogated.

The police Captain said that Ahmed should have been more forthcoming about the device since when questioned, Ahmed said it was just a clock. Which is like if someone asks you if it’s raining outside, you look outside and see the sun shining, tell that person no, and then they blame you for withholding information. So yes, this is a shitshow of the biggest proportion, especially since neither the school, nor the police department has apologized. And by the way, as this is being published on Thursday, September 17th, Ahmed is still suspended. And of course, this ain’t just some Islamaphobic shit, it’s some anti-black shit. 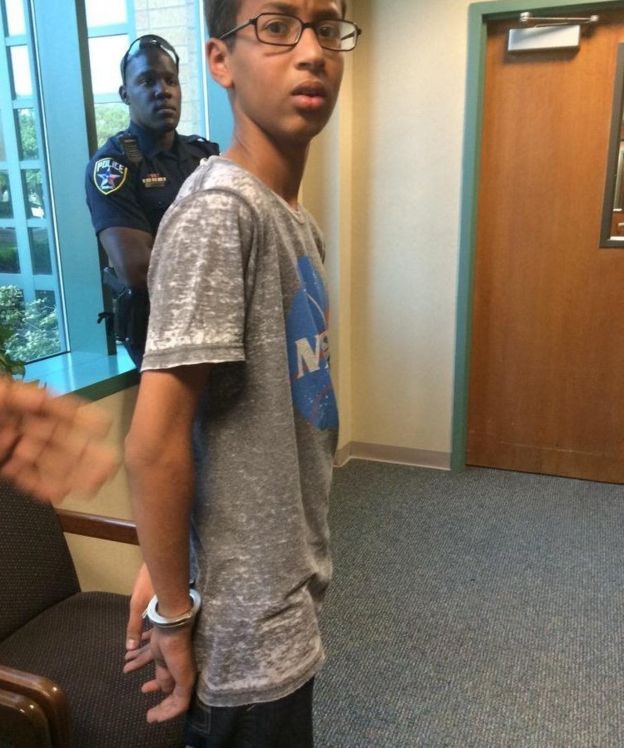 The support for Ahmed though? Stellar. Mostly. From Mark Zuckerberg to NASA engineers to the POTUS himself, many people have been on some “if you tired of bigots showing up in your engineering videos, come to Death Row” type shit. But Stephen Amell went a different way. You know, defending a state… with a really long history…

(I guess props for not deleting the tweet, I guess, right?) Here’s the thing, for all intents and purposes Amell is supposed to be a good dude (that’s what the internet tells me). Lots of charity work, LGBTQ ally, and so on. Dude is from Toronto, so if you’re wondering why he felt the need to defend a state that is basically the anti-Toronto, it’s probably because his wife and her family are from there. Amell, bruh. I been there. I’ve had to shoulder that load for Cleveland many times because my beloved was born and raised there (fam, the LeBron in Miami years were especially tough). Still, Amell fucked up. And now, after being dragged on twitter, being defiant about it, then coming back to apologize, and then enforcing a self-imposed exile from social media, he knows he fucked up.

I don’t know Amell’s politics per se (though he did say he was running for Prime Minister if Yeezy runs for President, so we may find out), but I would at least consider the cat progressive on some matters. But you know what, Matt Damon and Bernie Sanders are most definitely liberal and progressive, and Black folks are tired of their shit, too.

Let me say what frustrated conservatives (for which I am definitely not one) have been saying for years, but especially during the last seven: White Progressives shouldn’t be assumed to be allied with Black people just because. It’s 2015, yo. That shit is way past the expiration date. Over the last century, nobody has benefited from default Black support in the United States more than Tyler Perry and the Democratic Party. Often the choice has been between staying with the spouse who never comes home, leaves a few dollars on the kitchen counter and tells us to figure out dinner on our own (Democrats), or the abusive ex that will most definitely beat our ass if we stay with them (Republicans).

But something happened. Trayvon Martin was killed by a dude that was unjustly stalking him. And some of our beloved White friends said, “Yeah, but…” And then Michael Brown was killed and left in the street the next summer and a lot of our White Liberal friends said, “Well, what’s complicated about that is…” Then Renisha wrecked her car, knocked on a man’s door for help, got a shotgun to the face, and some of our closest White allies said, “But I could see how he…” And then, as if almost at once, we were done. Whether it be a passport, car registration, or a hood pass, we all gotta re-up sometime.

This is why Matt Damon, one of the most liberal Hollywood stars alive can catch these Black Twitter hands when he shuts down a Black Woman on his show and tells her what diversity really is. Don’t nobody care anymore how hard Damon campaigned for Obeezy (and then spent the last 6 years slamming him). Don’t nobody care that Matt Damon’s wife was born in Argentina or how hard he rides for Teacher’s Unions (as his mother was a teacher). None of that matters if it means we gotta sit in the corner and let him tell us how unimportant our representation means.

This is why Bernie Sanders got Black Lives Matter activists all up in kitchen, changing up his recipe. Yo, it’s awesome that you marched with Dr. King, Bernie. Bravo. My pops, he was poor and working his way through school and couldn’t afford to get to Washington for the march because he was trying to get a degree while financially helping his poverty-stricken Black family. But still, good for you Bernie for being there.

Plenty of people probably still think this means that Black people are ungrateful. But I’m sure someone was told they should be grateful for having a water fountain at all, even if it was the rusted out and busted one that probably had arsenic and metal shavings in the water. But as Stephen Amell and others are learning, ayebody can get it now. And fellas, if you are new to this battle, just know that Black Women have been having this battle with White feminists for YEARS. You want this support? You want to keep tapping into this market? We’re gonna have to see some ID. And yo, Hillary, the Whip and Nae Nae shit? That don’t count either.