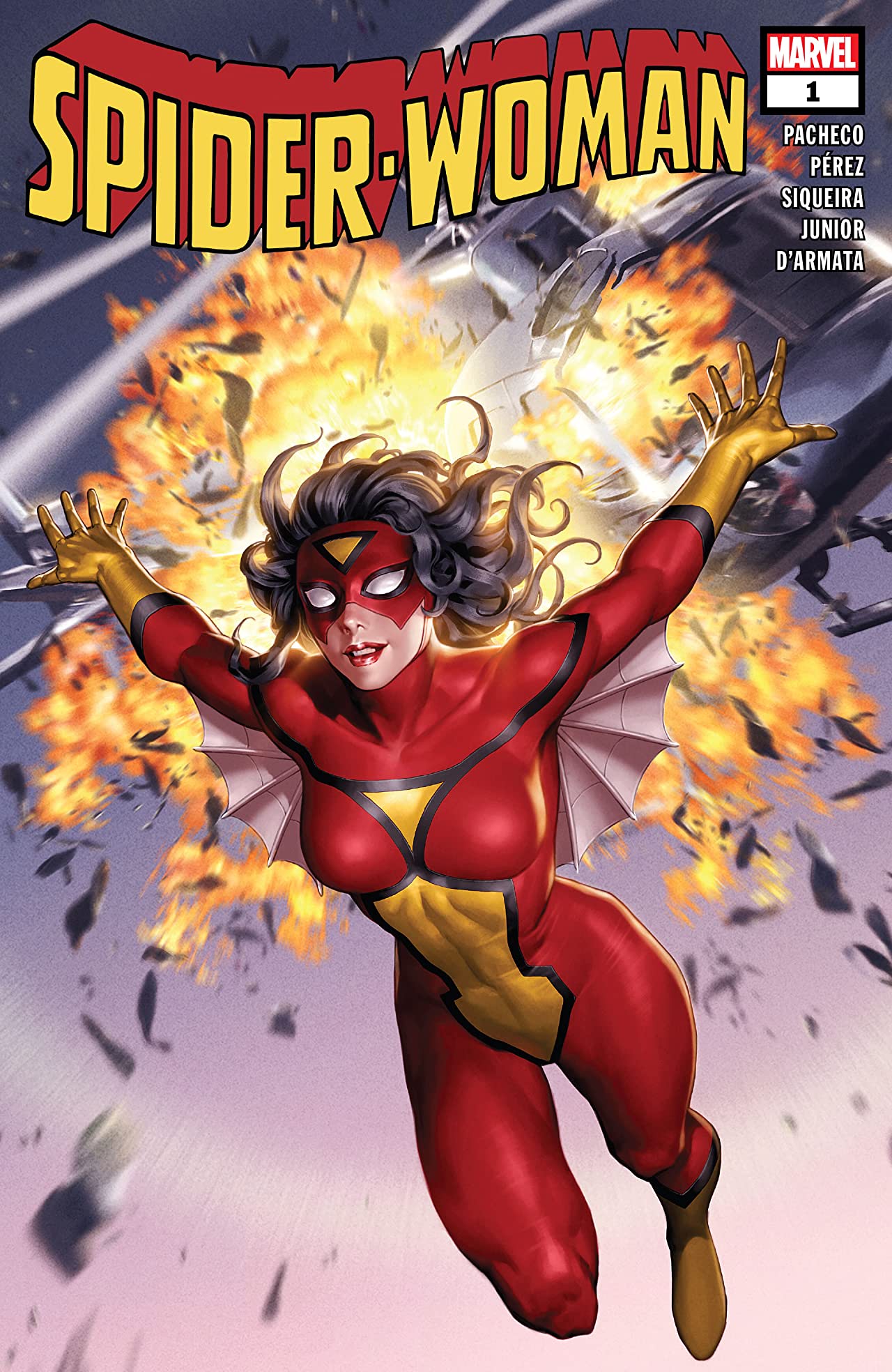 SPIDER-WOMAN IS BACK AND PULLING NO PUNCHES! LORDT, Jessica Drew has been through the mud, muck and all, hasn’t she? I’ve been off and on with keeping up with her, but I do remember that she recently became a mom and pushed a kid into the world, she’s been killed off, she’s worked for Hydra (LOL), and once upon a time she had her own animated series. 2020 is a perfect time to jump back into the fray and get reintroduced to Spider-Woman and the woman who has been a spy, private detective, and superhero.

Pérez’s artwork sets the action scenes fluidly from page one: the start of this issue is an attention grabber for sure. A page of Jessica punching baddies to standing around on…birthday yacht party for a sixteen-year-old girl clad in a Captian Marvel costume, surrounded by her peers also dressed as superheroes and comic book characters. (For the love of God and/or anything anyone or thing you consider holy–pay attention to these kids through the pages–they help make up some of the best dialogue this issue, and you can find them in all kinds of hilarious situations)

There’s not a lot of downtime this issue and instead, lots of high flying, high energy, high action panels, yet this doesn’t distract from presenting Jess as a woman who thinks best on her feet, in the air, and with explosions happening around her. I’m loving her new costume and even the cliffhanger at the end might be a bit gross–but it left off with a BANG and really shows the collaborative efforts of Pérez’s art with D’Armata’s fantastic coloring along with the penciling, lettering and inking of Siqueria, Lanhamn and Junior. 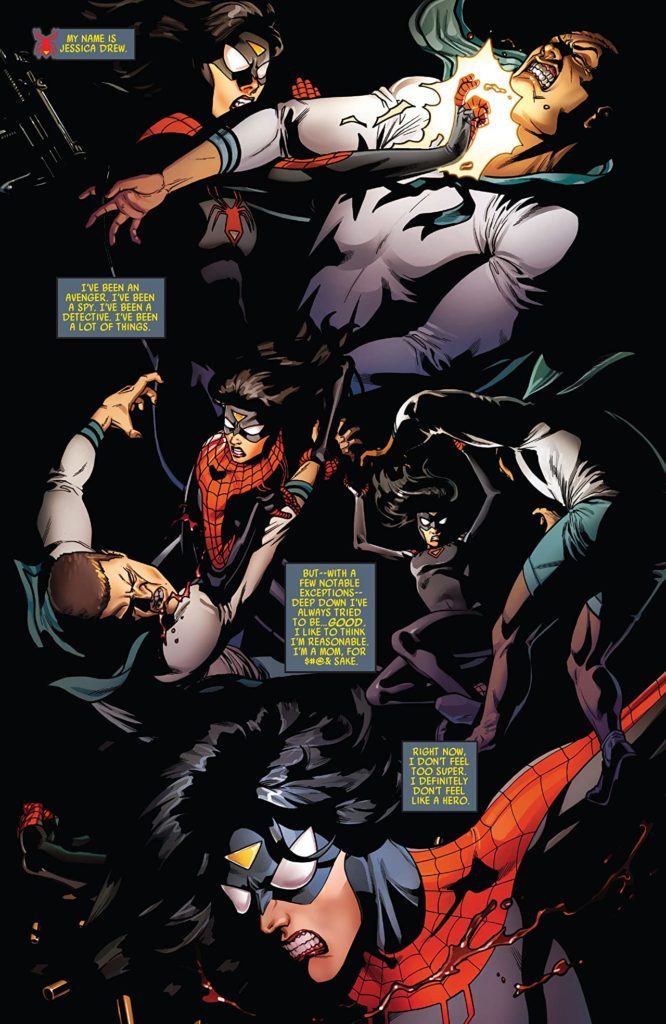 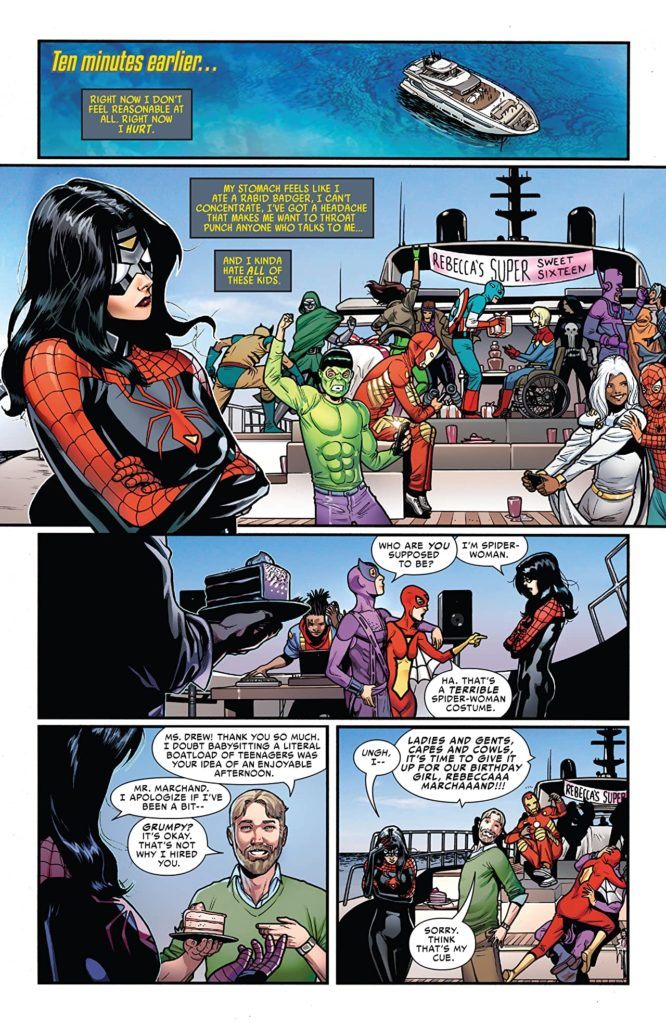 In the hands of a writer who holds great affection for her and writes her to not be one dimensional, Jessica has found herself in great hands by way of writer Pacheco. Jessica Drew is penned as a witty, woman who wants to preserve to get the rent paid and to buy diapers. She’s dealing with a body that acts out, a rage that is constant, and she’s also a woman with three threads of patience for teenage boys who have outdated and gross views about what roles women have in society. I enjoyed how I didn’t cringe reading her inner thoughts–*SIGH* So many men still write women in ways that are laughable in comics, y’all. LOOK, in the scene where Jessica is shopping for a new costume, the quip about needing a material that stretches around the hips hits differently (with a female customer) presented between two women with a female writer hits differently. *chef’s kiss*

I appreciate this greatly. Along with the funny bits, I see potential here for Spider-Woman to have someone who is writing her to shine and make the character have one of their best runs–you’ve seen it–with Kelly Sue and Captian Marvel and so on. Spider-Woman is an iconic Marvel character with a storied past, and I believe she’s in good hands with this creative team that includes Pacheo which really sunk in after reading and getting to the writer’s note at the end.

Spider-Woman #1 is a really fun first issue that captures the WOW factor by a creative team that is doing the most and having the most fun while at it. I haven’t reviewed a Marvel book in such a long time, and it is certainly one of the books that is showcasing the best that Marvel has to offer in regards to talent.

8.5 Not Honorable Deadpools out of 10