It’s not enough to say that I’ve really been enjoying this comic. The truth is, Wonder Woman has been reminding me what I really loved about comics as an art form to begin with. Rucka’s Diana continues to be the perfect marriage between one of DC’s most powerful warriors and most earnest peacemakers, and with Sharp’s near flawless pencils one feels sucked into an ancient world of myths beyond our human understanding. In fact I’d argue this issue has one of my favorite openings to a comic I’ve seen in a while, with Sharp taking full advantage of his panel design to create a sweeping, lush background and a dazzling depiction of the body in action rather than mere shallow fan service. Not to mention this killer one liner immediately following: 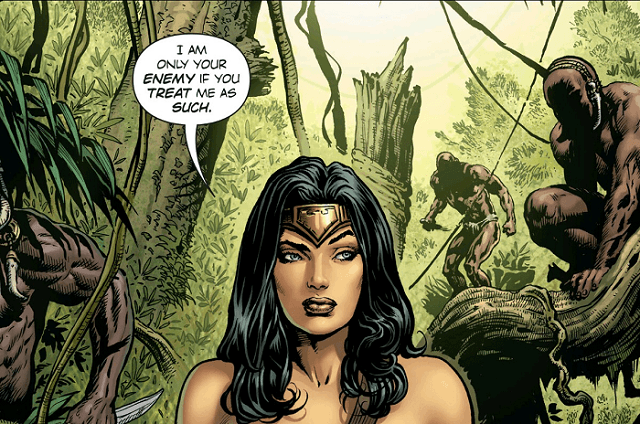 Look, y’all, I could actually spend this whole review dissecting the perfection of that one sentence paired with the most unbothered of sideeyes knowing you have at least three enemies with a clear shot at your unarmored shoulders because ain’t nobody messin’ with the Wonder Woman, but believe it or not it gets even better.

So after landing in the country of Bwunda (sidenote: is Bwunda looking to establish a barbershop any time soon?), it turns out Themyscira’s sweetheart has not only tipped of the local legendary beasts with her presence, but the CIA as well. And this is where Rucka’s brilliance really starts to shine as he brings back not one, but two characters from Wondy’s Golden Age in an actually plausible yet pleasantly surprising way. Oh, no spoilers here, but let’s just say if you’re like me and missed the way Amanda Waller used to be portrayed, you won’t be bitter much longer. 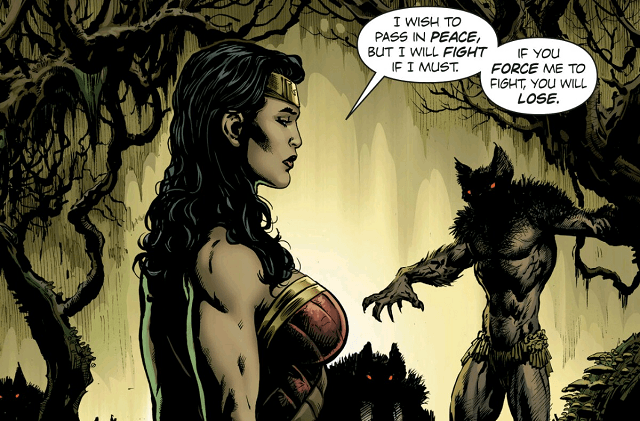 As much as I want to continue giving this issue nothing but praise, though, I’d be remiss if I didn’t address this whole… Bwunda thing. Man. Oof. It is tough to read White Savior Man tromp through fake Africa’s jungle-desert-village and into the home of some suffering Black folks just trying to grieve out of harm’s way, even if it is just a few pages. I mean… If this comic wasn’t so good at keeping the focus on Diana where it belongs with some gorgeous visuals to boot, this score would drop heavy. But lucky for us readers, the damage isn’t quite as bad as it could be, and the cliffhanger gives us a much-needed launch back into the thick of the action as yet another specter from Diana’s past enters the fray.