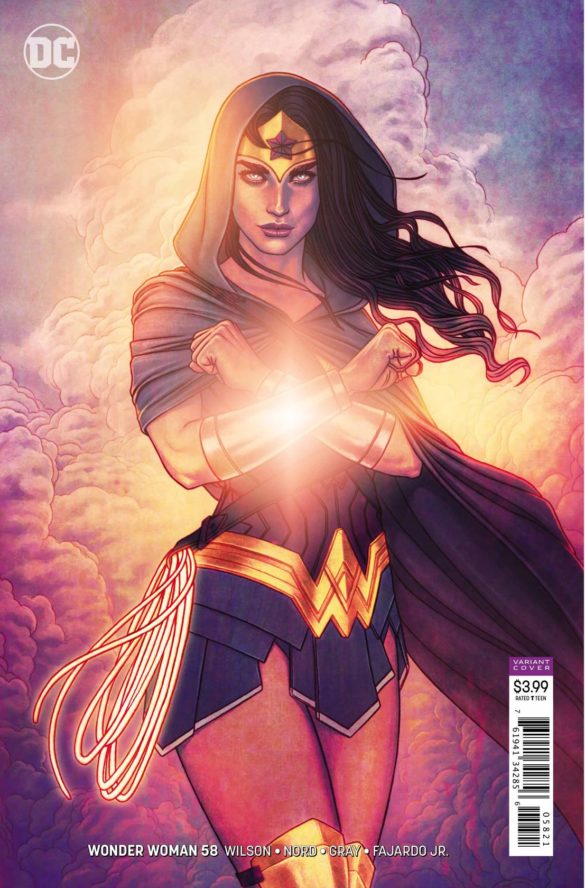 I have been looking forward to this new Wonder Woman run for a number of reasons. Obviously, I’m a fan of Wilson’s other comic, Ms. Marvel. I’m excited to see Wilson branching out of Marvel teen hero-land into a completely different comic, one that isn’t known for being funny or full of teen angst. How much of that Ms. Marvel vibe will we see here? But I’m also excited to see a new side of Diana. Like the other heroes who are existing simultaneously on movie screens and in panels, each character informs the other. Wonder Woman, a childhood favorite of mine, is coming to life in all new ways, and I want to be there as it happens. How will the DCU Diana influence this in print character?

That’s quite a subtitle for this arc, The Just War, centering everything Wonder Woman stands for right there in the title. The comic starts with Ares and Grail, daughter of Darkseid, hanging out in a prison for immortals for all eternity. They have a love/hate relationship, which is what happens when you’re locked up with someone for literal ever. The two trading quips is a fun intro and the art really does them justice. It reminds me of the Wonder Woman/Conan crossover I reviewed a few issues of — plenty of action panels and sound effect words (done well by letterer, Pat Brosseau).

All the action makes the comic move quickly and well, reminding the reader of Ares’ personality (you can check the DC Wiki page if you’re new to the pantheon) and of Grail’s position as a shit-disturber supreme. What kinds of damage will these two unleash on Prime Earth? The last page leaves us with more questions than answers, for sure. 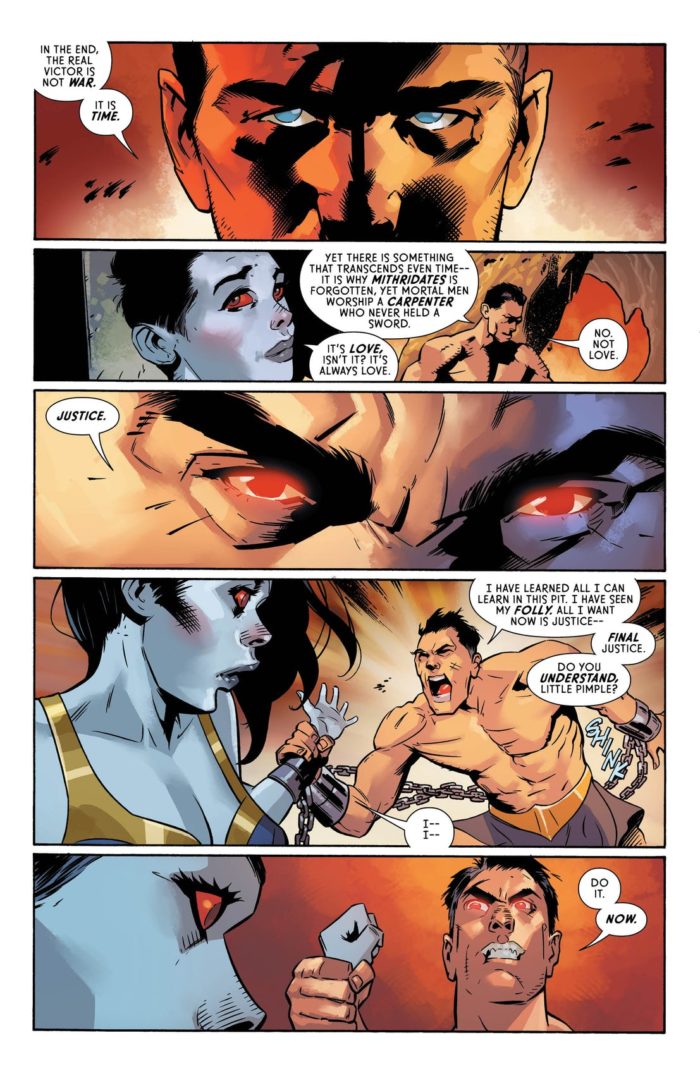 Diana and Steve and Ares?

Steve and Diana are still a couple, and Steve is still jetting around the globe in various military engagements. It is a perfect set up for Diana to have to come save her Dude in Distress. As predictable as the set up is, I’m here for it because Wilson complicates the plot almost immediately. Just like with real-life international conflict, everything about this story gets more intertwined page by page. The plot thickens well, with monsters, a mysterious little boy (always the creepiest character you can add to any fiction), and finally Ares himself taking center stage away from Diana.

The action stays hot and fast, with Wonder Woman dropping both her shield and her judgmental attitude all over unsuspecting normal soldiers. We’ll have to wait to see how she interacts with other immortals as the story progresses. There’s definitely much to uncover.

This issue sets up the arc solidly and tells us we’re going to get here exactly what we’re looking for: superhero action with the iconic Wonder Woman, written by one of the best in the business and backed up with fantastic imagery. Get on board, Wonder Woman fans and G. Willow Wilson fans alike, this looks to be a good one.

7.5 Greek mythological monsters out of 10