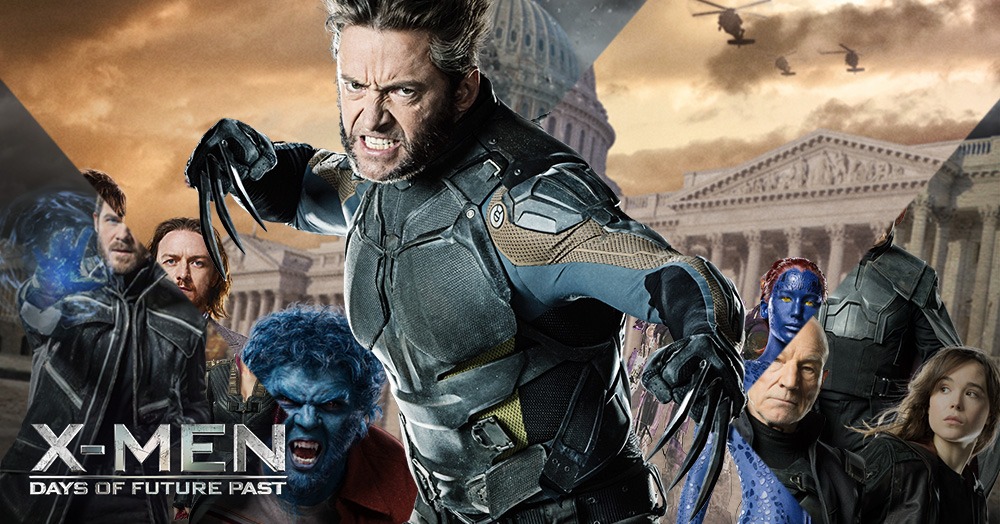 X-men: Days of Future Past is here and it is glorious…. if you aren’t a comic book nerd (shout out to the muggles). If you happen to be a comic book nerd then this film is still pretty fantastic but watching it you’re going to feel you are playing Tic-Tac-Toe with continuity errors. So for the sake of this review, I’m not going go that route.

We’re going to take the film as it is.
“But wait, how does Wolverine have metal claws in the future when in his movie he–?”
Hey…Trust me.  Just…

Now, for those of you reading this unfamiliar with the Days of Future Past X-Men story line, I’ll fill you in. The future for mutants has basically become living in Florida while being a black woman or man presently. Yeah, nuff said. The future is dreary, dark, and no shred of hope but the X-men are still around…. barely. You know the original cast (Xavier, Magneto, Storm, Wolverine) is back and we get to see the X-men from the school that made it (Kitty Pryde, Iceman, Colossus) along with some new faces as well those being Warpath, Sunspot and Bishop.

A lot of people were psyched Omar Sy got cast as Bishop and its good to see him in the movie. However, The MVP of the future team? That girl Blink thoooooooooooooooooo…

Blink’s abilities were a major asset to the future team as well as being visually amazing to see each time. There were so many variations for how Blink used her powers for both defense, offense and especially team work in this movie. Sadly she doesn’t talk much but I guarantee she will be killing the reblogs on your tumblr dashboard soon.

Plot wise the movie wasn’t that confusing. It’s similar to Terminator/ The Time Traveler’s Wife/ Back to the future 1 2 (we don’t acknowledge 3)/ The time machine/ Bill & Ted’s Excellent Adventure… but not, because this was a classic from X-Men lore written back in the 80’s and in THIS time traveling movie we got mutants as well as robots. Long story short, Wolverine’s consciousness has to go back in time (to his younger body) then prevent this certain event involving Mystique (Jennifer Lawrence) and the main villain Boliver Trask (Peter Dinklage) from happening so that the future is saved. Also, Trask is the man responsible for building the robot killing machines, The Sentinels.

Fun Fact: In the comic book. The future when this is all taking place is the year 2013.

Now, I know what you are thinking,
“Wait in the book isn’t Kitty Pryde the one that goes back in time and how does she  do-“

You know Wolverine is going to need the help in the past. Who better then the Young Charles Xavier (James Mcavoy) but he is down, pissy and could give a fuck less. It was great to see a professor Charles Xavier with no glimmer or care for hope. I won’t explain how he’s walking (you saw it in the trailers folks) but I will say Beast (Nicholas Hoult) has a hand in it.

Mcavoy did a great job of showing this side of Xavier that we honestly have never seen before. Stack that with needing Young Mangeto (Michael Fassbender), who is currently being held in prison under the pentagon and got what might be the best jail break in the game, since Wolverine knows just the guy for it. Now if Blink was the MVP of the future mutants then the past mutant’s MVP is

Aka Quicksilver. In three scenes Evan Peters damn near stole the whole show. Peter comes off as this ADD nightmare that you can not help but love. The visuals used to display just how fast he is in the prison break scene where he takes on a room full of guards is honestly enough to leave you satisfied. There wasn’t an overhaul of CGI for the film entirely, they nailed it in just enough spots. Pietro’s scenes especially.

Now without wanting to spoil how the plot unfolds or how future Magneto’s (Ian Mckellen) warning to Wolverine that his younger self is a bit of a dick pans out. I will say this to sum everything up. There isn’t much action in this film but that’s more than okay.

It was very emotionally driven on the actor’s part (the main actors).  This was really a story of the fall out between Xavier and Magneto. What drove them apart (what continues to do so) and what is keeping them together (for now). Wolverine isn’t necessarily the main character for this film either ( for once), it centers mostly around Charles, Magneto, and Mystique. Jennifer Lawrence isn’t her “Mutant and proud” self from first class this time around. She is “iceberg ahead cold” and it works for this movie. She has all intentions of a killer for the right cause (in her mind).

This is actually a pretty good sequel to the franchise.

I’d see this again without  a second thought. We get to see a bunch of cameos (shout out to stryker), we get sentinels (finally right?) we get the “meanwhile in the future” scenes while Wolverine is back in the past, We almost had it all. The downside is Halle Berry says damn near nothing in this movie. I honestly think she has one line and she is from the original cast people. I wish the future mutants got some more say but that’s my only complaint.

Well that and… how come when Magneto flies
it looks like a waiter carrying two plates full of entrees  extremely carefully?