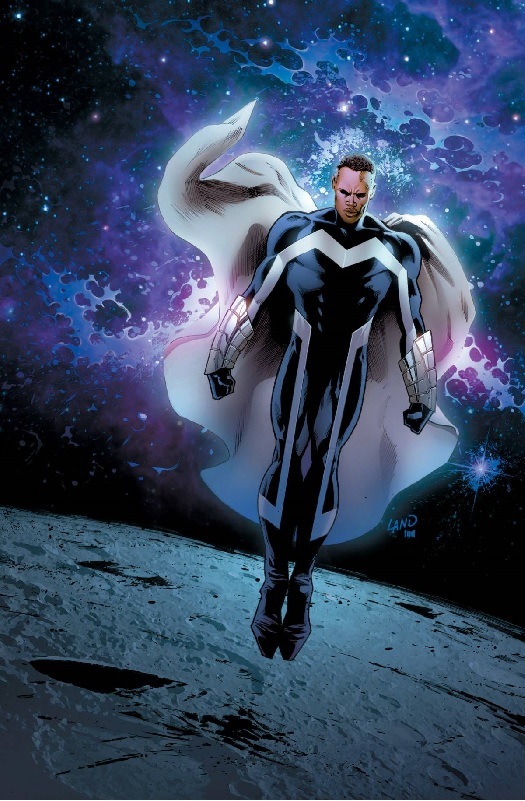 Al Ewing refuses to stop swinging on us. Mighty Avengers 10 is here and it does not disappoint folks. There is no question of how Ewing was able to insert the Original Sin cross over into this title. Ewing is even able to make the ridiculous hilarious as we get the opening with blade fighting a gang of Were-Roosters. Oh, I did not mess that up folks. I didn’t get that wrong. You heard me right. Were-Roosters.

It’s so hilarious that it’s genius. We also get the mighty Avengers helping to take out one of the Mindless Ones that we saw running around in the main Original Sin story line. Ewing gives us a great nod to Monica Rambeau’s days in the Nextwave series.

The heart of this book however isn’t in the action. It’s the exploration into the relationship between Uatu and Blue Marvel. We don’t know much about Dr. Adam’s past but we do know he was boys with The Watcher. However, Reed Richards breaks the news of Uatu’s murder to Adam assuming (cause Reed has horrible bedside manner) he already knew. Adam didn’t to which Reed’s response is “Ah. You weren’t informed”. This becomes the echo Adam hears repeatedly as he talks with Uatu’s next of kin Ulana. The visual we get are the panels focusing on Adam dropping his cup and it’s slow dissent as Reed’s words play on loop through his mind. This was a great issue to see as we get more build upon Adam’s past, how it connected to the watcher, and how fondly they thought of each other (I am hoping Blue Marvel meets up with Nova Sam Alexander to talk about Uatu since Sam was his most recent friend).

We get to see Blue Marvel ready to take the case into his own hands and explain to Ulana the Earth customs of funerals, and burials. Now if you been following Mighty Avengers you know that as parent Adam has lost two children (in a sense. One son trapped in another dimension, the other son blaming him for it). In this issue we get to see Adam receive another chance at being a good parent. It is a very touching scene to see as well.

I wont give it away but it’s a scene that makes me appreciate Ewing being on this book and the character development he has been putting into all these characters.

GET THIS BOOK FOLKS!