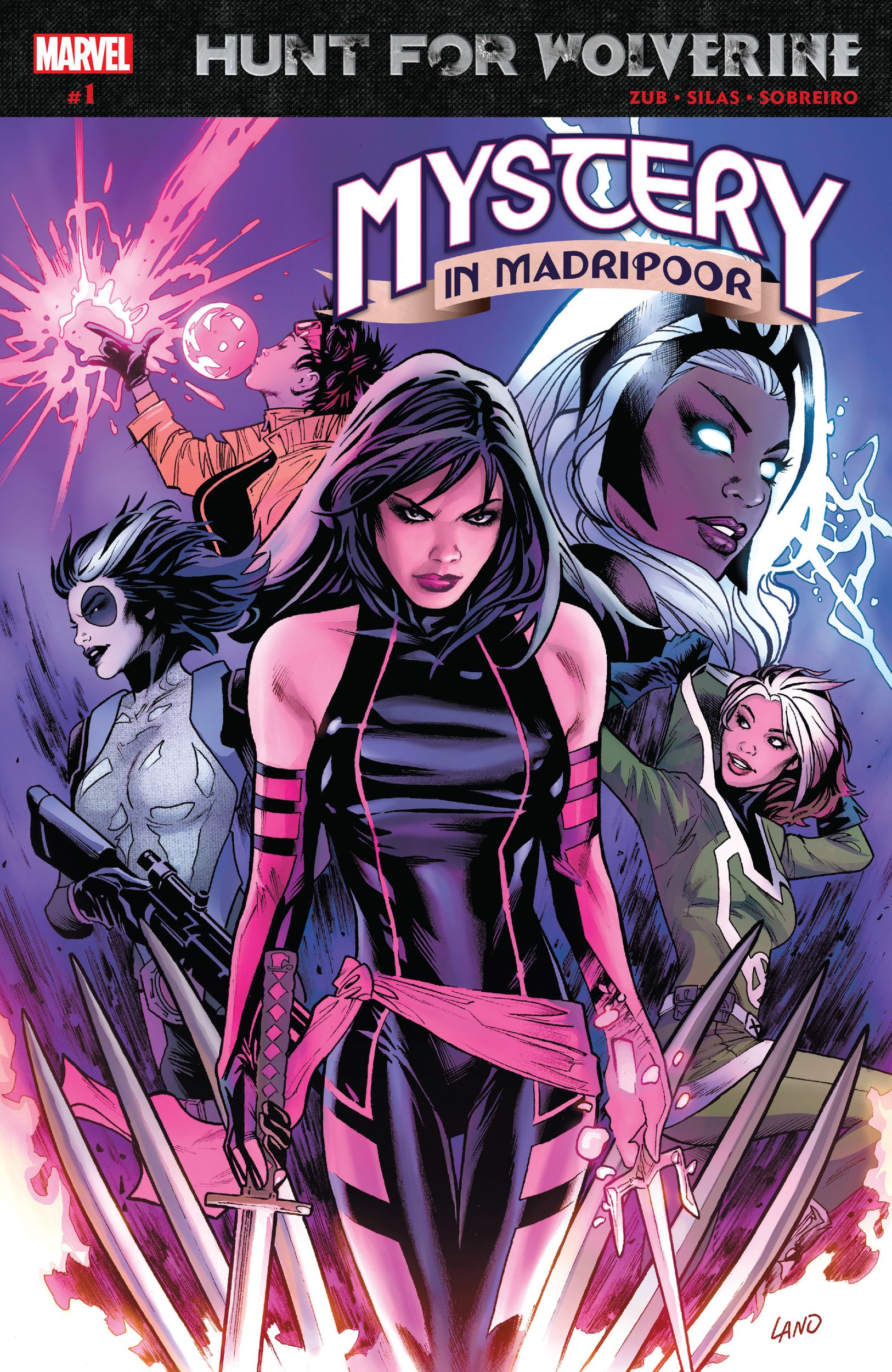 The fourth mini-series in Marvel’s Hunt for Wolverine quasi-event finds Kitty Pryde leading a team of fan-favorite X-Women to the infamous island of Madripoor. The team, rounded out by Storm, Pscylocke, Jubille, Rogue, and Domino for convenient transport, heads to the infamous nation in search of one man – Magneto.

Kitty deduces that the only one capable of removing Logan’s body without evidence is their fabled foe. Magnus has spent the past two years stationed in Madripoor, mentoring the time-displaced original X-Men and leading a reserve unit to battle the Mothervine virus. Magneto was believed to be dead by many of the X-Men after Psylocke impaled him at the end of Uncanny X-Men (Vol.3) #17.  Only after the young Jean Grey confessed to Kitty that her team was working with him did the X-Men have reason to believe otherwise. 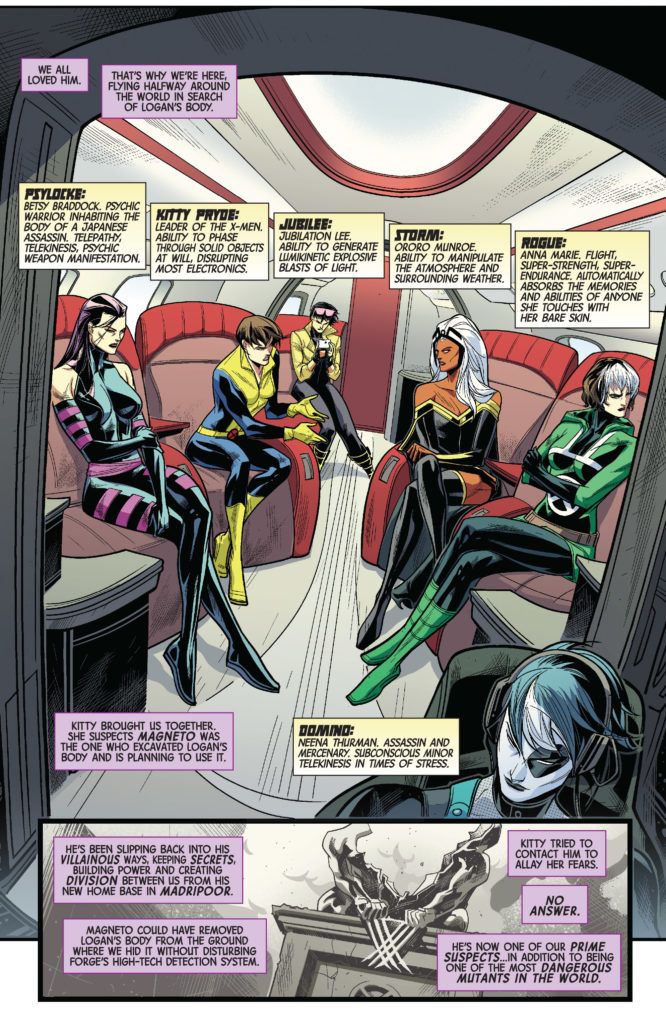 Instead of an expected confrontation with Magneto, the team discovers a secret archive of Logan’s inside of the Princess Bar. Relics from their respective relationships with Wolverine illuminate the difference he made in so many of their lives.  Aware of their presence in Madripoor, Magneto invites the X-Men to dinner at the King’s Impresario Restaurant. Psylocke realizes too late Magneto is actually a telepathic impostor. As Storm is taken out of commission first, the X-Men are quickly ambushed by a team of mutants led by Viper (unseen since the fall of Hydra).

The immediate draw for this series is obvious – the A-list female X-Men lineup. (Jubilee arguably is not exactly A-list, but she’s a solid mascot and leader in her own right). Compared to other heroes in the superhero pantheon, female relationships are based solely upon a “mother or lover” dynamic with their male counterparts. Wolverine has exes (some that never die and some that want him dead), but his role as a surrogate father and confidant to once neophytes Rogue, Jubilee, Kitty, and Psylocke reveal his tenderness. The highlight scene of the issue takes place in Logan’s secret archive where a bit of nostalgia is revealed; however, it shows poignancy when Rogue finds an angry letter from Carol Danvers, disappointed that the X-Men would protect the girl who nearly killed her. 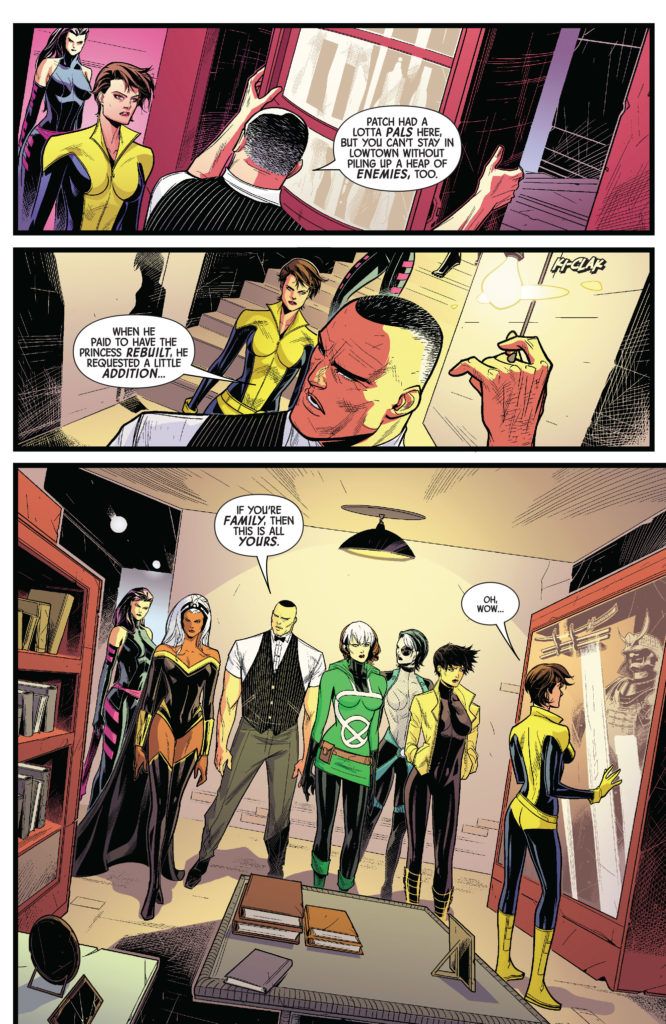 When the X-Men are ambushed by Viper and her hired telepath, they are assailed by an all-female unit of mercenaries. For some reason, the two of the members of Viper’s team are dead ringers for Storm and Domino. Is that the super villain thing now…to hire henchmen that look exactly like your foes in the hopes they get confused and psi-blast themselves? Without any narrative rhyme or reason for the Domino and Storm clones yet to to be realized (if there is any), the restaurant sequence feels clichéd and rushed. 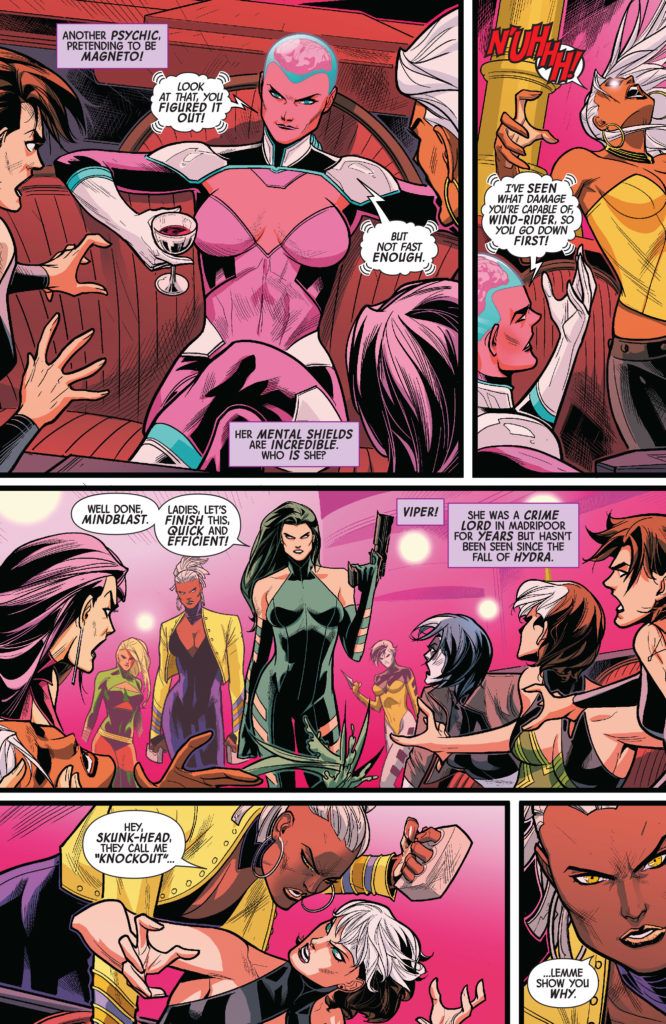 Given the character roster, expectations were high for this book. Thus far, it feels less developed and sure of its genre compared to the other entries in the Hunt for Wolverine series. “Adamantium Agenda” cemented itself as a buddy-action-adventure. “Weapon Lost” presents pure Marvel Knights-styled noir, and “Claws of a Killer” has the makings of a bloody, brooding zombie tale. While those entries started off firmly in establishing their tones and worlds, “Mystery in Madripoor” feels flat and generic. This lineup deserves a great story, but without a distinct narrative tone and art the series feels just off the mark.