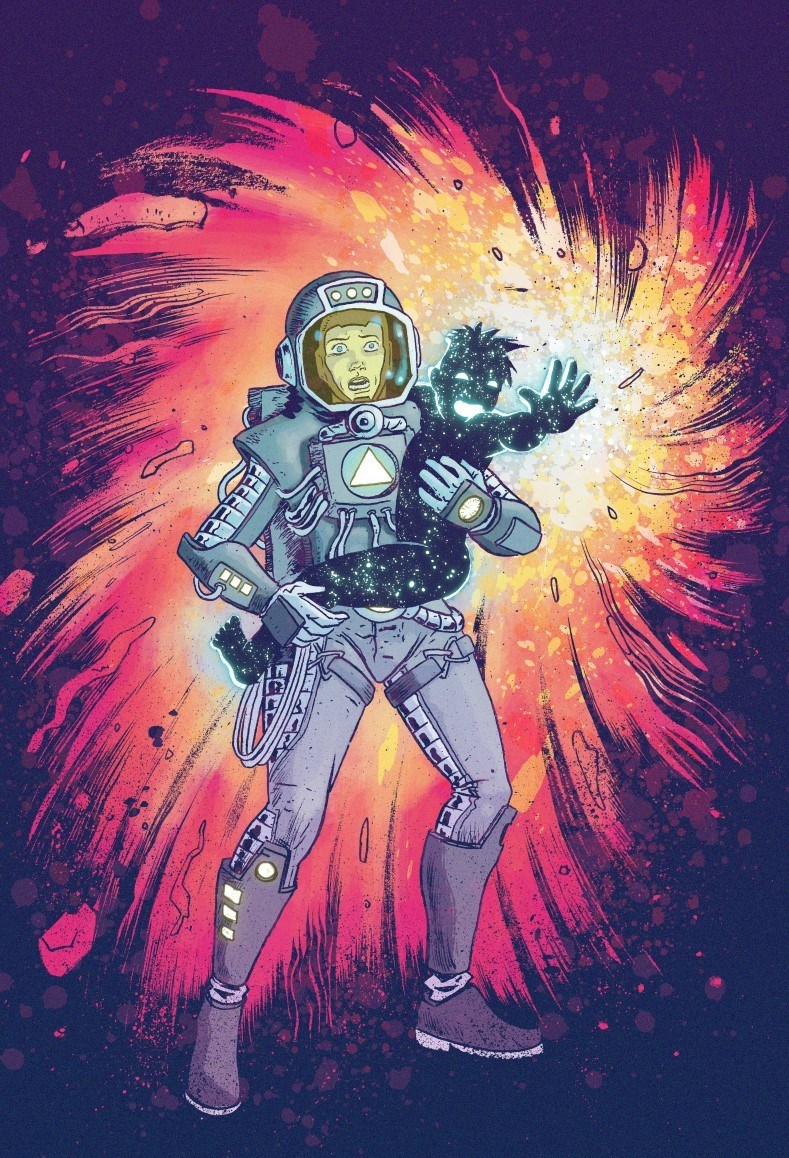 In October of the hell year that was 2020, I interviewed Toren Chenault, Co-Founder of Black Hole Comics & Entertainment and Co-Editor of the publisher’s first anthology A Cold, Dark Universe. At the time, that interview served as a way to help get some traction for the book, which was on Kickstarter, but now it’s available for anyone who missed out on the campaign. If you’ve never heard of this book, or you want to know more about it before you buy it, here are three things to hopefully persuade you.

A Cold, Dark Universe is a book dedicated to science fiction, filled cover to cover with writers and artists telling the stories that they’ve been left out of for so long. Sci-Fi is such a dope genre, but so much is often left out or not considered in favor of white male protagonists. Traditionally, the white male has served as an everyman, a recognizable figure that we could all project ourselves onto. But the problem is we are not all straight white males. So we can’t so easily imagine ourselves in these spaces. Giving everyone a voice and providing everyone a space in these stories is A Cold, Dark Universe and Black Hole Comics & Entertainment’s mission statement. And when it comes to this book specifically, it does a really good job at showing us just how powerful stories can be when they are led by people from different walks of life, not just on the page, but behind the scenes.

For example, the book’s first story, “Interloper” by Jared Lujàn and Kasey Quevedo, revolves around a captain, crew member, and robot on a ship that have to deal with what to do with their stowaway passengers. The main characters are Latinx, but the story isn’t about that. It respects who they are in their roles, and that’s it. And guess what? You still relate to them. You even learn a little bit too as you see names and words from a culture that differs from yours. As cool as Blade Runner is, we don’t get those types of layers.

Every name in this book is probably one that you’ve never heard of, but that’s what makes it so enticing. Some of these stories are the first comics ever written or drawn by their creators. Because of that, there’s a lot of raw passion and potential on display. Stories that take chances and break convention, from creators that aren’t afraid to buck the system. That’s how you get a line like “We made it to Mars. Do Black Lives Matter yet?” as seen in Couture and Scanlon’s short “Space Punks.” These things come from the heart, as opposed to feeling reactionary in an attempt to be part of the moment.

You ever watch a movie or read a comic and think “I could do that. Maybe even better.” That’s what we get with these stories. It’s writers and artists that are fed up with the status quo and the narrow point of view of stories from a medium that has so much untapped potential.

A book like this doesn’t happen without a ton of support. And the person I think of most when it comes to supporting others is Toren Chenault. This book is his baby, and these stories were all shepherded into existence by his will. You wouldn’t be reading this if it wasn’t for him. The man doesn’t just talk about it; he lives it. The push for diversity, and equity in this industry is at the forefront of everything Toren does. And this is just the beginning.

His story with Christine Gutierrez is also a metaphor for what Black Hole is all about. The story, which shares the same name as the anthology, is all about tearing down societal barriers to build a stronger future. What more could you want from a comic than to leave it with the feeling that you can make a change in this world?

Look, if none of this is helping convince you to check this book out, don’t just listen to me. The evidence speaks for itself. This book was a success on Kickstarter, bringing in just shy of $16,000 on a projected goal of $14,300 with 424 supporters. Books don’t get funded if people aren’t interested in the story and have faith in its creators. The fact that this book was able to achieve such a feat while not being able to rely on name recognition is a pretty big deal.

I’m telling you. The names in this book are going places in this industry. Don’t you want to be able to say that you knew about them before anyone else?

A Cold, Dark Universe is available here. Tell ya peoples.