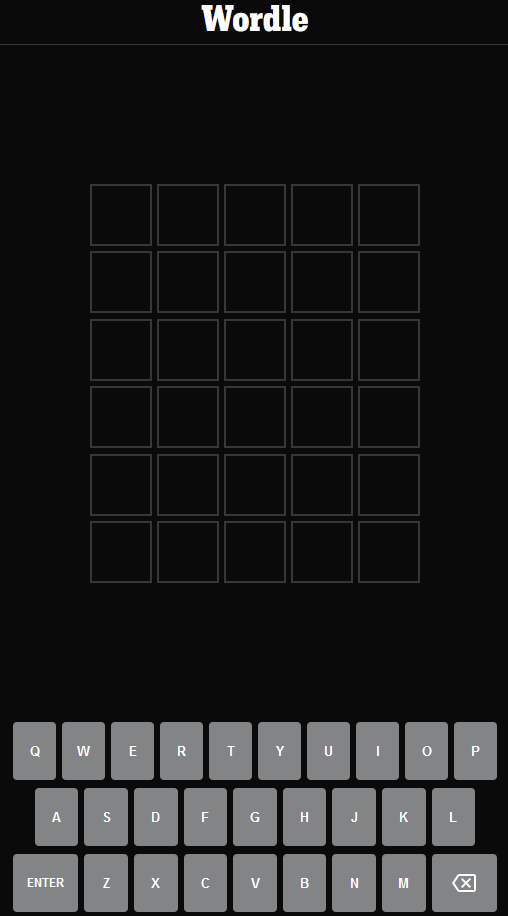 So before I talk about Worlde, I actually have to talk about crosswords. You see, near the start of the pandemic, one of my best friends got really into crosswords. As a result, I got caught up in the riptide and ended up embedded in the outer fringes of crossword twitter; a pleasant place (from my angle anyways) where constructors and solvers talk about puzzles from various perspectives and also occasionally intersect with the other word-y, language-y games that exist on the web. It was via crossword twitter that I saw the first enigmatic WORDLE #, */6 and a seemingly esoteric array of grey, yellow, and green squares like some type of weird code. However, I didn’t fall down the Wordle-hole until a little bit later as I still parsing out lessons from the grid.

During my primer into the crossword world, my friend/crossword mentor ingrained into me (or at least attempted to) some guiding principles when making a puzzle. How the relationship between the constructor and the solver was an inherently unbalanced dynamic. The solver sits down with puzzle with nothing but an empty grid and a series of clues. They don’t know what the end result might be. This brought up questions of “fairness,” and she constantly asked me if what I had assumed was common knowledge was actually something I just had the fortune of knowing. This brought up questions of “teaching,” of if I wanted to inform of the solver of a thing, and how could I make it discoverable or otherwise manageable.

And crucially, it brought up this idea of “consent.” In crosswords, there is an implicit pact being made between the constructor and the audience. Constructors have the choice to curate their word lists, acceptable strings of letters, when compiling their puzzles. And as is the case, there have been many times where a particular word or phrase is deemed problematic, but kept around because it has “good letters” as the case may be. My friend made great efforts to make sure that before I put a name in a crossword, to research if there are any potential controversies. To be mindful of alternative meanings of expressions and not to blindly trust that just because an entry is in a wordlist means that it is appropriate for every type of puzzle. There were considerations in making puzzles that I had never considered.

All of these factors would eventually influence how I view Wordle in all the myriad of ways.

If for whatever reason you need a refresher to Wordle, the game itself is aggressively simple. You have six guesses to determine what the daily five letter word is. If your word contains an incorrect letter, it is marked grey. If it’s in the target word but in the wrong location, it’s marked yellow (or blue if you’re using the high contrast setting). And finally, if it’s in the word and in the correct location, it’s marked green (or orange). The only other major crinkle is that the game also features a “Hard Mode” where you must always reveal letters. On one hand, it makes you think about the words that you use. On the other hand, it makes it difficult to eliminate letters.

Of course, I didn’t know any of this when a 5 by N array of multi-colored boxes begun being posted on Twitter sans context. Eventually a quick search revealed the old URL and the game, and I carried on with my day. One day, however, a critical mass of users in the BNP Discord began talking about the game, and I began searching for a place to share their boards. As more and more users began playing, it warranted an entire channel dedicated to Wordle.

As we continued to live in an endless dirge of timelessness and restlessness, having a simple collective ritual was nice. The act of sharing starting words and strategies. The exchange of lucky second words and frustrated sixth guesses that didn’t quite there. All you needed was an internet connection and you could be in the conversation.

John Wardle did not intend to make a pop culture phenomenon. John Wardle made a simple word game for his partner that eventually got adopted by the collective consciousness, and it became very apparent that this one-person dev team was not ready for the magnitude of scrutiny it was about to come under.

Right now, you can actually view Wordle’s source code in most browsers. You’re able to see the underlying architecture and if you dig around, you’ll also be able to find a list of the viable answers. The game’s simplicity works in its favor, but it was not ready for the upscale and increased scrutiny.

Server traffic was concern. Various quality of life enhancements for an ever increasing fanbase on twitter. The discovery of some less than savory words as potential answers. All of these aspects that probably would have gone unnoticed in a different timeline. However, in this timeline, the explosion of popularity was enough to capture the attention of the behemoth of word-based games: the New York Times.

This purchase for a moderately undisclosed low seven figures marked a couple different concerns at various points. Before the switch in URLs, it was the preservation of the win streaks and saved data (a transition that was mostly smooth, although not entirely without its casualties of individual user data). At the onset of the transition, there were conspiracy theories about how the game got “harder” (a fact that ultimately didn’t have any hard corroborating evidence, but certainly felt like it did) and an altered answer list (which as far as anyone could tell, only removed some the aforementioned “unpleasant” words). And then there were the alternative timelines that popped up.

At various points, group chats were put into disarray at the seeming existence of two Wordle answers. An aberration in the timeline, it wasn’t a common appearance, but it happened enough during the hand off that it was a little concerning. However, the most famous deviation happened well after the hand off.

Circling back to this idea of consent in puzzles, one of the original slated words for Wordle was FETUS. However, in a weird confluence with the rest of the universe, this solution was announced just after the Supreme Court decision to overturn Roe v. Wade. The NYT discussed their actions and one of the more interesting technical problems that happened. In an attempt to change the answer, it became evidence that unless a user refreshed their browser, they wouldn’t get their updated version. Thus, it resulted in the first major modern schism of Wordle, but the incident served two important functions: the continual difficulty of curation and the perpetual difficulty of maintaining even a simple word game.

Around the time of The New York Times’ acquisition also marked a time when the BNP Discord’s Worlde channel became a more generic puzzle channel. Mostly crosswords (some of which thanks to yours truly) and the daily Spelling Bee for others, but it prompted a more generic name of “A Puzzling Room” which also aligned with another increasingly obvious fact: Wordle had several imitators.

This copycat effect isn’t new to the gaming world. Player Unknown’s Battlegrounds inspired Fortnite and then dozens of other battle royales of varying popularities and audiences. Destiny would pave the way for live service looter shooters (after Borderlands trailblazed the classic looter shooter). Imitation is the sincerest form of flattery.

Wordle’s a fun case study in that it inspired two connected genres of -dle games. The first branch was rifts on the Wordle format of guessing words. In this vein, you have Duordle, Quordle, Octordle, and Kilordle, pretty much any numbered prefix with a -dle at the end where you solve multiple Wordle simultaneously. And of course, you had Wordle’s for different languages as well. You had anti-Wordles where the game would actively change their answer to take the most guesses, and even Letterdle, where you had to guess which letter of the day it is. Although, I think the coolest variant was when the American Crossword Puzzle Tournament apparently managed to enlist Wardle himself to make a custom Wordle Golf-ish game.

The second branch veered more into the concept of tiered guessing with some feedback. Nerdle was the simple arithmetic version where you tried to discern mathematical equations. Worldle was more geographic trivia. Heardle was for your music nerds, and Framed was for film. And there even was a Rolldle for Destiny that was originally done as an April Fools’ Joke that became a thing. Heardle and Framed were less puzzle-y and more trivia-y, but the iconic format was instantiated and was here to stay.

Months into the Wordle-craze, I’m inclined to believe that we’ve all established our relationship with the games. We’ve selected our favorite variants (classic Wordle and Nerdle from my -dle games, and the USAT and Vulture daily puzzles) and we’ve made pacts. For me, I play nerdle because it’s a fun logic puzzle. And for Wordle, well in March of this year, as a bit I started using XYLEM as my starting word to attempt the most improbable word snipe ever, then I just kept the word several months past, and now I am equally awarded and punished for my hubris.

There is no wrong way to play (so long as you’re not interfering with the joys and efforts of others), and however you find your challenge and your bliss with your daily ritual, there is no denying the satisfaction of seeing a full row of green or a crossword with no marks.

Games like Wordle ultimately bring us together. Between its simplicity and ease of access, Wordle offers a brief respite in a hectic world. It only takes a few minutes out of your day to test your vocabulary and see how your thought processes compare to others around you. During the blur of Wordle’s first catching, there was an almost serene peace that we hadn’t seen since Pokemon Go. An implicit agreement not to spoil the next day’s word. A friendly competition (or perhaps a collaboration if you played with a partner) that we documented in different nooks and crannies of social media. A labor of love that became beloved, and that’s something worth celebrating.