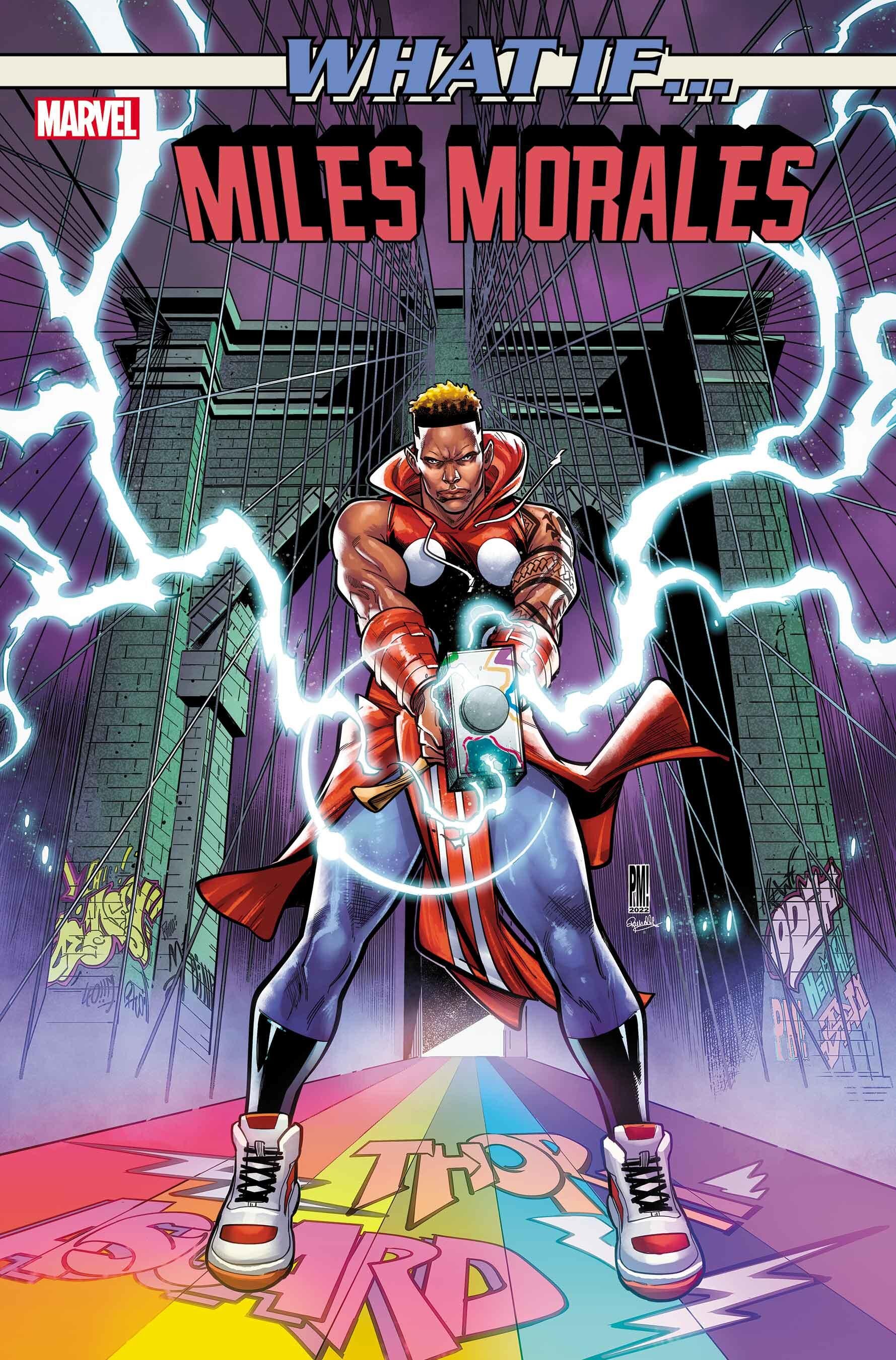 Did you know for the decade that Miles Morales has been a character in Marvel Comics, he hasn’t been written by a Black writer in his main title yet? He was co-created by Brian Michael Bendis, and Sara Pichelli, and after about a six-ish year run, it was handed over to Saladin Ahmed.

Now, Saladin Ahmed is most definitely that dude, and he’s been holding it down for Miles, but in all this time, it’s a shame that we haven’t had a Black or Afro-Latinx writer get to really flesh out who Miles is, and provide to the audience a well-rounded, believable character in the medium that birthed him.

Instead, we get this:

Please don’t scratch your eyes out. That’s not going to change the fact that this image exists, and you’ll just be in excruciating and debilitating pain. Unfortunately, this is just more proof that we live in one of the darkest timelines because seriously, this is… a lot.

If there was ever a doubt that Black people should have the opportunity to tell their own stories, that doubt has been yeeted into oblivion after the release of this comic book.

This opening page is part of Marvel’s What If…? Miles Morales series, where each issue tells the story of an alternate Miles who became another beloved Marvel hero instead of Spider-Man. In this one, as you can see, Miles becomes Thor who lives in an Asgardian version of Brooklyn. But by the end of the issue, instead of what if, we’re just wondering why?

Miles Morales is one of the most popular characters in comics today, and his stock continues to rise with appearances in comics, television, and movies. He’s an embodiment of the idea that anyone can be anything. For a character that’s only been in existence for the better part of a decade, the future is looking bright. But there are still some major pitfalls from those behind the scenes that continually disappoint us and often leave us infuriated.

How Did We Get Here?

Why am I asking that question? You know the answer by now. We got here because the person who wrote this issue, Yehudi Mercado, isn’t Black. That isn’t to say that a Black writer can’t make questionable decisions about a Black character, *stares hard at Falcon & The Winter Soldier*, but having a seat at the table in these instances will at the very least slow the rate that this type of thing happens.

To be fair, Miles is Black and Puerto Rican, and Mercado does bring Latinx representation, but everyone’s gripe is that this story so specifically highlights Miles’ Blackness, that everything else is secondary. Plus, Miles is Afro-Latinx, which Mercado is not so that just brings us back to square one.

While some of the decisions Mercado made for this character are questionable at best, the ultimate blame should really fall on the institution that allowed something like this to happen, and probably didn’t even realize it was an issue until the justified outcry on the internet.

I could get into the weeds about Marvel and those in charge there, but it’s really bigger than them, too. This is an instrumental problem that needs to be addressed. And it’s not just in this industry, it’s everywhere.

There needs to be deliberate and intentional dedication to finding the write voices to write and flesh out these characters, even in a fun side series like What If…? Because when it’s mishandled like this, we all feel disrespected. So yes, Mercado shoulders a lot of the blame, but there’s a team of people that approved this idea. It went through a pitch, most likely a few revisions, and a lettering pass or two before it was completed, and no one at any point thought that maybe this wasn’t a good idea.

It’s wild that the most authentic versions of Miles that we’ve gotten have been from Into the Spider-Verse, Miles Morales video game, and Miles Morales: Spider-Man, written by Jason Reynolds (who is Black). While I love that these iterations of Miles exist, and they undoubtedly add to his legitimacy, it sucks that other mediums are handling this character better than the one that gave him life.

Instead, we get Miles saying “Hammer Time” while holding Mjolnir.

I know Marvel knows that diversity and representation are important in this industry and to fans. Just look at their Voices series, born out of a podcast, which is an ongoing anthology book dedicated to giving platforms for diverse creators to tell the stories of characters that represent who they are.

They’ve got issues spotlighting Black, AAPI, Latinx, Indigenous, and Queer creators and characters, so it’s not like Marvel is oblivious to this issue. This is exactly what we need more of in this industry, but it has to go further than spotlights and eight-page stories. Diverse creators deserve to be handed the keys to a franchise, especially if their very being adds substance and depth to that character that will ultimately make them better.

I love Voices, and I think it’s some of the best stuff Marvel is putting out there, but why can’t we do books like this, and write Miles Morales? Continuing to not provide us with opportunities on big named books just tells us that you either are afraid to invest in us or aren’t making it a priority, and both of those reasons are disappointing.

Why did this book have a hybrid of Brooklyn and Asgard? What was the purpose of that?

Maybe the point was to drop Miles into the fantastical world of Norse mythology. But if that was the case, why did there have to be a blend between that and Brooklyn street life? There can be Black people in Asgard.

To me, this is one of the things that really does a disservice to the story. It’s so concerned with trying to combine these two elements that everything else falls to the wayside. I think it would have been stronger if Miles was just straight-up Asgardian, or if he was just his normal self from Brooklyn.

It would make more sense if Miles was a regular kid that somehow became worthy of Thor’s hammer. That probably wouldn’t have gotten rid of the ill-advised references in the dialogue, but at least it would have been able to avoid the meshing of two otherwise completely different cultures that really don’t fit together. You could also focus on the unfamiliarity of that object and its background as it’s juxtaposed with Miles and the neighborhood that he comes from. The version of Miles we got isn’t Thor in the way Jane Foster is Thor, he’s literally Thor Odinson, so it makes you come in with a certain level of expectations.

Reading this issue, it just seemed like there was no attempt to make this version of Miles a well-fleshed-out character, and in turn, he becomes a soundboard full of outdated and corny catchphrases that scream that he wasn’t written by someone who talks like this, let alone someone who is actually representative of our culture.

Twenty-two pages is not a lot of real estate to develop a new character, and it’s got to be even harder to do so in a book like What If…?, where you have to subvert the audience’s knowledge and create something new. With that being said, this is the multiverse we’re dealing with, and just because that means you can do whatever you want, doesn’t mean that you should.

To make matters worse, it seemed intentional to make Miles as “Black” as possible by using visual identifiers to try and sell what this version of the character was all about. The first few images of the book show Miles with a blonde fade and a lightning bolt buzzed into his haircut, shoes hanging from the powerlines in the streets, and some Jordan-esque sneakers in a poor attempt at a reference to Into the Spider-Verse, while managing to lack all of the substance.

I think the thing that really took me out was the ’80s era rapping that Mercado tried to add into Miles’ dialogue. It felt like trying to write in the style of Run DMC, Slick Rick, or Kurtis Blow.

As I write that out, that idea doesn’t inherently sound horrible. Scott Snyder has borrowed from the aesthetics of the Heavy Metal genre for a lot of his stories, and it works; however, adapting the aesthetics and lifestyle of hip-hop for something like this requires a lived-in experience, not just a reverence for the genre.

It’s bleak out here, but as annoying as this has all been for us Black nerds, we definitely know how to get these jokes off, and we more than know how to let our voices be heard. Since all this uproar, Mercado has released an acknowledgment and apology for the issue, as well as promised to donate the money he made from this issue to the Brooklyn Book Bodega.

That’s all because we spoke up. So with that, I’ll say let’s keep it up. Keep our foot on their necks until this type of thing happens less often, and we can continue to celebrate a character instead of screaming into the void for people to make better choices.

Miles deserves more. We as fans deserve more. And unfortunately, it’s ultimately up to those in power to ensure we get opportunities to tell our stories but until then we’re applying pressure.

We are tired, and at this point, we want more than a seat at the table.