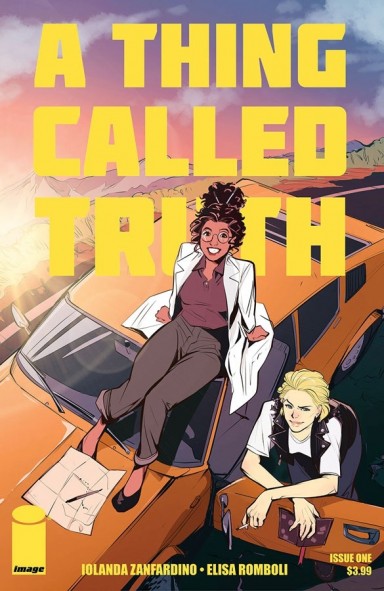 You know, I didn’t know I needed a high octane road trip comic with obvious queer undertones (and overtones) but now that I’ve gotten a glimpse into the future with a copy of A Thing Called Truth #1, I honestly don’t know why I haven’t been asking for one constantly.

I mean, who doesn’t love a cold open where a car is racing from a laboratory in hot pursuits from a mass of cars that quickly accelerates into a Thelma & Louise styled jump across a rising bridge as the start of an issue. The issue then backtracks into how it got to this wild point.

As it turns out, all of this revolves around Doctor Magdalene Träumer (the one in glasses) and her vaguely defined “new devices” for specialized medical R&D. It is specifically made in order to provide higher quality healthcare to other parts of the globe. However, Doctor Mag also succumbs to the typical scientist tropes of being way too invested in her work at the detriment of her interpersonal relationship. (Although her ex-husband is kind of a jerk, so who’s to say who’s actually at fault.) And in further fictional scientist fashion, her altruistic intent to help others is not looked kindly upon by capitalism. I won’t say anything more other than “shenanigans” ensue, but I will tell you that the shenanigans are *fun*.

Zanfardino has a playful cadence with the dialog. Lots of excitement bolstered by Romboli‘s animated art stylings. A Thing Called Truth #1 pulls you in with this combination of excitement and endearment and keeps you entertained through its humor and raunchiness.

A Thing Called Truth #1 is a fun way to start a five-issue mini-series, and its themes and messaging are particularly resonant in this day and age. I’m very excited for the wild misadventures Doctor Mag takes her and her driver on, and I’m hoping you’ll join me along for the ride as well.