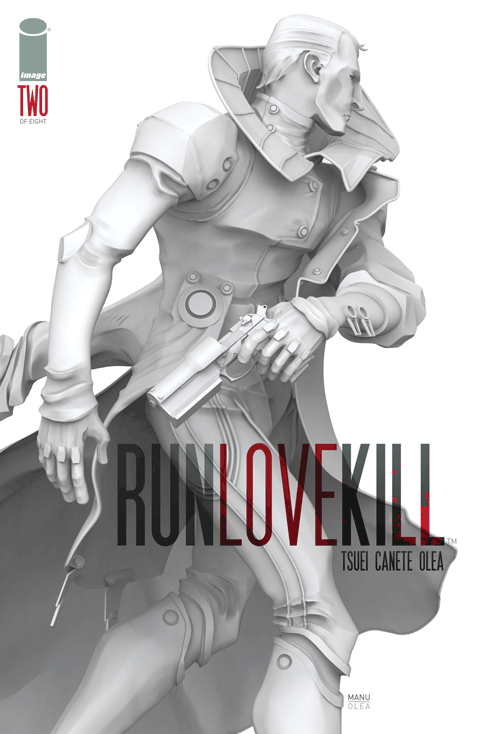 We’re back with the highly anticipated second issue of RunLoveKill, an 8-issue miniseries that’s the lovechild of Eric Canete’s art and Jon Tsuei’s story telling. And a beautiful child it is – fans are already trying to claim BFF status in the cafeteria and scouts are eyeing the youngin’ like colleges are with Lebron James Jr.

The second issue delves more into Rain’s backstory to paint a better picture of who she is and what she’s running away from. What’s impressive about Tsuei’s dialogue is that there’s so little of it. A woman of few words, RunLoveKill’s main character says more through actions and artwork than words – slumped posture here, close-ups of a nervous scratch there – allowing readers to piece together Rain’s emotional responses to the little information we actually know. The dialogue isn’t dense, yet the story is; making for an interesting experience as a reader who flies through the words only to spend 3x the time unpacking the panels.

Added to the cast of Rain and Dey, another important character steps to the forefront as someone who deserves attention. Their relation to Rain is like the others we’ve seen in her life so far, which is to say they seem to gravitate to her despite her… troubles? Yeah, let’s call them troubles. Rain is the person who makes your life far more complicated than it needs to be, yet, still, the person you want to support most. We all have that friend. We’ve all been that friend.

Expect to learn a little more about Prygat in this issue – a technophobic’s least favorite city in the world – and look for insight into who the Origami Coorporation is. What makes them evil? Do you even consider them as such yet? I look forward to learning as much about the antagonist as I do Rain, as Origami’s objectives will do much to form perspectives on why she needs to run from them. Or love them. Or kill them.

Overall, RunLoveKill #2 stays on track to keep this a great miniseries. Canete’s artwork is not only stunning, but also paces an intriguing story that is a steal at $2.99. Oh, and writer, Jon Tsuei, teased there would be dinosaurs in this issue. Now you have to buy it.