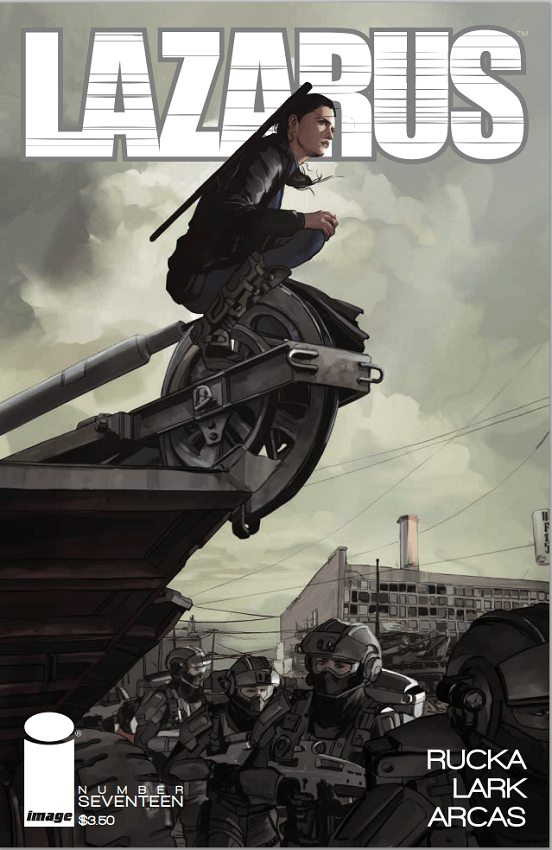 After 16 issues of implied and understood tension between the families in the world of Lazarus, by the time we reach issue #17, we are in full out war. After Hock’s literal poison pill that landed Father Carlyle in dire straights, his army is up to some seriously nefarious stuff. After the unique and excellently structured storytelling of the previous issue, where Sister Bernard was sent on a mission to uncover what Hock was hiding, we shift away from the subterfuge and to the in your face combat. Hock forces are pushing deeper and deeper into Carlyle controlled lands with some specific targets in mind that could mean real defeat for the Carlyle Family. 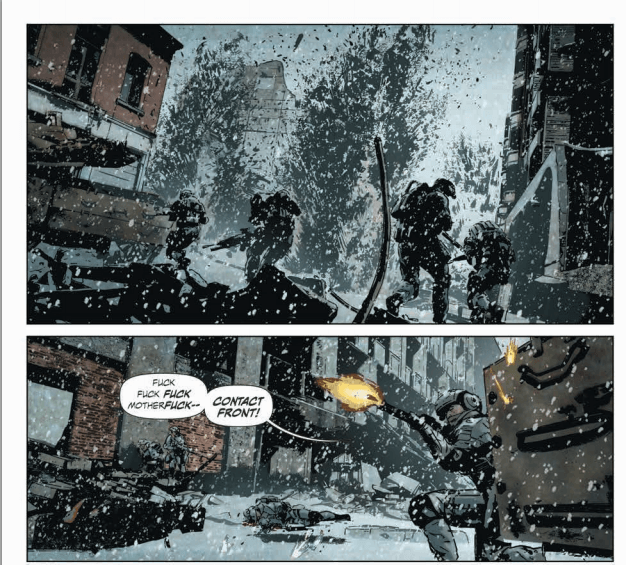 Even while the second and third act of this issue are almost entirely dependent upon dialogue, this is a very busy installment. The introduction of so many new people in glancing shots throws the pacing off what is usually impeccable for this book to just being noticeable as a small distraction. What the creators do very well with is the inner politics of the Carlyle Family. Like any super powerful family in fiction, everyone has a role, but not everyone is satisfied with the role they are supposed to occupy. What makes this situation more unique is Forever, herself. Ever since the summit, Forever has stop taking her meds and therefore isn’t as compliant to her family’s demands. I love the subtle way that Rucka reminds of this, never lingering on it too long, but giving keywords like, “she blew me off, she not supposed to be able to do that.” I don’t doubt that even against the backdrop of this war going on, that they will find ways to weave in the mystery of Forever’s origins and how she came to be the Lazarus of this family. 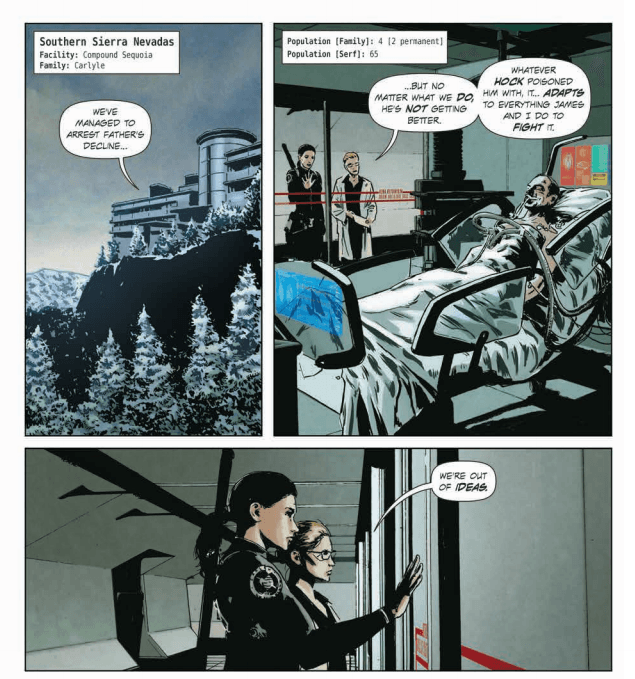 And as usual, Michael Lark is superb with his pencils. I love how much trust exists between these two when Lark is given the space to tell a story with his positioning and emotional reactions where dialogue isn’t heavily involved, if at all. The opening pages where a firefight ensues between Carlyle and Hock is a perfect example of this.

Lazarus #17 gives a lot of intrigue into the family dynamic of the Carlyle’s while building a desperation not only for the Patriarch of the family, but for their prospects of winning the war. Some small pacing issues aside, this issue sets the table for some very cool stuff ahead, including the possibility of seeing Forever on the battlefield herself. I personally, can’t wait for that.