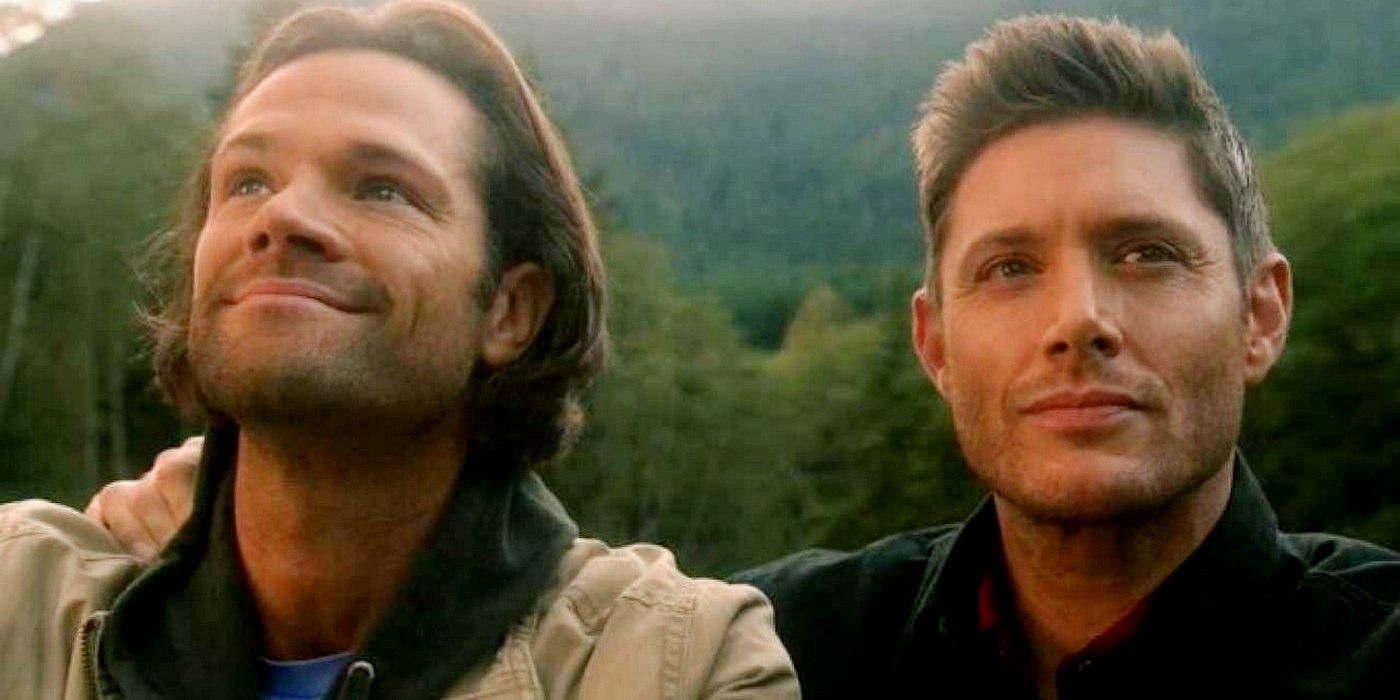 Few shows make it past the coveted 100 episodes needed for syndication, and even fewer make an impact so strong that it serves as a hallmark for an entire generation. Rarer still is the show that accomplishes both. But that’s exactly what the otherworldly drama Supernatural did before concluding its staggering 15-season, 327-episode run on The CW this Thursday. Since 2005 we’ve watched the Winchester brothers Sam (Jared Padalecki) and Dean (Jensen Ackles) battle demons, monsters, and even God himself (aka “Chuck”), all in the service of humanity and each other. It’s been an exciting and, at times, gut wrenching ride that’s been hit or miss over its decade+ run, but always worth the trip. Unfortunately for fans, the finale “Carry On” didn’t quite capture the endearing spirit.

“Carry On” picks up two episodes after the heartbreaking goodbye of the angel Castiel (Misha Collins) and the high octane penultimate episode where the Winchester finally get the drop on Chuck (Rob Benedict) and with the help of the of the nephilim Jack (Alexander Calvert) strip God of his powers. #TeamFreeWill is allowed to live their lives in peace, free of Chuck’s machinations that have plagued their family since before Dean and baby brother Sam were even born.

Most shows end with a bang, as the lead characters face their darkest challenge yet. But “Carry On” follows in a different, and welcomed, alternative of ending the series after the fact, showing us what life for our characters is like after life gets back to normal. In “Carry On” the brothers return to fighting the run-of-the-mill otherworldly foes. In this case a nest of vampires kidnapping children to feed on later. It’s a welcome return to Supernatural’s baddie of the week format that the show was especially known for in its early seasons as it built its complex mythology.

The episode moves quickly, with the Winchesters locating the missing children within the first half-hour. It’s not until Dean is impaled by a metal rod during a fight with the vamps that we understand why. In what’s supposed to be a heartfelt moment, Dean says goodbye to his baby brother and tells him not to try and bring him back as, “That never works out well.” Sam tearfully says goodbye, and Dean Winchester dies for the final time.

It was a moment that should’ve made even the most casual Supernatural fan weep, but the moment just didn’t hit. It felt rushed, both in its composition and delivery. A good way to describe it would be how a former roommate once described choreography in Destiny’s Child performances: “Beyoncé and Kelly were dancing. Michelle was counting steps (1 and 2 and…).”

This entire goodbye felt like Jensen and Jared were counting cues and hitting their marks in as few takes as possible because there were more scenes to film, and the team was losing daylight. This was a stark contrast to the gripping season 5 finale that aired in 2010.

Longtime Supernatural fans know that when series creator Eric Kripke (Supernatural, The Boys) pitched the show to the WB network (before its merger with UPN that birthed The CW), he did it with a having a 5-season arc. The season 5 finale episode “Swan Song” opened with the unexpectedly touching backstory of the Winchester’s 1967 Impala and ended with the brothers fighting against a destiny that would ultimately see Sam sacrifice himself to the pit of Hell to save Dean. The episode had high stakes that had been built over 5 years and the emotional heft of two brothers who would risk any and everything to save the world and each other.

Despite being the culmination of 15 years, “Carry On” didn’t have that. There’s a touching moment when we see Dean’s arrival in Heaven, but it’s short lived. He’s reunited with Bobby who was sprung from his heavenly prison by Jack before the latter remade Heaven into a bona fide paradise instead of the rehashing of one’s favorite memories. Bobby tells Dean that his parents are also there together. Even fellow hunter Rufus (Steven Williams) – one of the few Black characters in the overwhelmingly white show – is there with his boo Aretha (Franklin!?). Bobby tells Dean that time moves differently in Heaven than on earth and that Sam will be up there soon enough. In the meantime, Dean takes a ride in the impala that miraculously appears.

While Dean is driving down the Heavenly interstate, Sam lives his life in quick succession. After dealing with his grief over losing Dean, he gets married to (or knocks up) a nameless woman whose face we barely see and has a son he names Dean. He lives a good, seemingly uneventful life, grows old, and dies (he keeps the impala in the garage). Then he appears in Heaven, somehow younger (both Dean and Bobby are the ages they were when they died), joining Dean as they stare out over a bridge overlooking a drying river that looks more like the future site of a landfill.

For a show that helped define a generation, it’s unfortunate to see Supernatural go out on such a lackluster note. While Supernatural owned Thursday night with a touching retrospective the hour before the finale aired, “Carry On” might have been better served as a proper two-hour sendoff that allowed the finality of it all to truly marinate, as well as answer some questions.

Who was Sam’s life partner? Did he continue hunting or pass the knowledge down to his son? How did the loss of Dean shape Sam, and by extension mini-Dean? Did Dean ever try to get Castiel back? Did he ever realize any romantic feelings for Castiel? Hell, did any of the good monsters even make their way to that side of the veil? Does anyone in Heaven or earth know what the Winchesters did for them? What will the Winchesters find fulfillment in an eternity where they’re not hunting what goes bump in the night? How are they being honored by the hunters down below? And where the hell is Jack?

Series finales are tough, especially when a show is as beloved as Supernatural, but even star Jensen Ackles wasn’t a fan of the episode when it was first pitched.

“Yeah, so, during the hiatus between season 14 and 15, Jared and I went out to L.A. and sat down in the writers’ room, which I think is the first time we’ve ever done that,” Ackle said. “It wasn’t like a brainstorming session. It was, like, ‘This is what we have, take it or leave it.’ And I just walked out of there kind of uneasy. I don’t know if it was just the fact that I just heard the ending of a show that had been going for 15 years and I’m just too close to it to really accept a finality to it.”

And perhaps that’s where the finale went wrong. Jensen says that when he spoke with creator Eric Kripke (who was no longer with the show), the writer advised Jensen that he was too close to the material to see the bigger picture. But maybe that’s what “Carry On” needed; someone who was close to the characters to help close out the story.

When Supernatural first premiered, its leads were in their early 20s. Now grown men with wives and kids of their own, they’ve grown up with their core audience, and the show has reflected that growth. The fans aren’t just fans. They’ve been a vocal part of the show, many for the entirety of their adult lives. Who better to help close out a show that’s grown that much than the people who did the growing?

Regardless, Supernatural’s place in cinematic history is cemented and stars Jensen Ackles, Jared Padalecki, and Misha Collins are set to begin exciting new chapters of their respective careers. And like our beloved Winchesters, we’re left to carry on.