Last week we featured an advance review of Something is Killing the Children #1, a new horror series from Boom! Studios. It was absolutely enthralling from the get-go. We here at Black Nerd Problems were also fortunate enough to get a chance to talk with the writer, James Tynion IV, and editor, Eric Harbum, to get some deeper insights into the chilling new horror series.

As a fair warning, the text and visual in this interview will contain *spoilers* for Something is Killing the Children #1, but let’s jump in.

The Beginning at Boom! Studios

BNP: Could you both give us a peek into the behind-the-scenes process of bringing a creator-owned (promoted to on-going) series like Something is Killing the Children to the shelves?

James: Sure! This book is really a culmination of a long relationship that I have had with not only my editor, Harbum, but Boom! Studios as a company. Back when I was writing backup stories on Batman — and I think it was a few issues or so after the release of Talon, my first on-going with DC — that Boom! Studios reached out to me and asked if I was interested in writing an original series, or pitching one at least. That conversation and what came after it, led to bringing a series called The Woods that had been cooking in the back of my mind for a long time. I brought that series to Boom! and it ended up being a good-sized success for the company. It ended up running for thirty-six issues and really helped defined my voice, at least for myself, for the early part of my career. In the time since, I have launched several series with Boom!: The Apocalyptic Trilogy (Eugenic, Cognetic, Memetic), UFOlogy, and The Backstagers. You know, they all sort of came from me exploring the more personal side of this type of work that I always wanted to do. In the last two years, my primary focus has been on DC Comics and I have not being doing as much in creator-owned space. That was good for me for a little, but it started to build up in the back of my head. 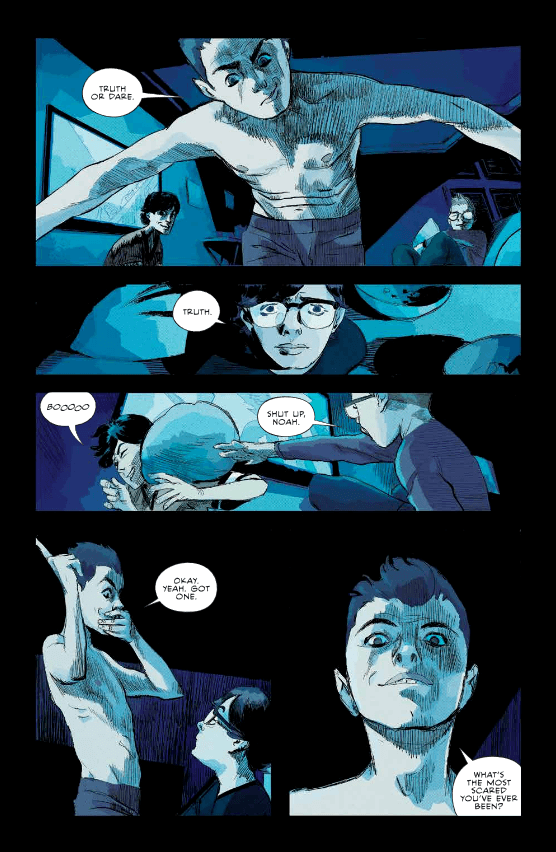 I knew I had more stories to tell, more personal stories that I really needed to get to. And one of the stories that came to the forefront was the story of this monster hunter, Erica Slaughter. She would arrive in this small town in the upper Midwest and you would see her with these sunken eyes that have just clearly seen so much horror in the world. She’s the person you would least expect to arrive and go fight a horrifying monster in the woods. But she’s there to fight and kill the monster and then she’s going to move on to the next town because there’s always a next town because there are always monsters in the world. And that’s the core driving idea. I had this story I really really wanted to tell. I reached out to Boom! and Eric and said, “I’m ready to talk creator-owned again. I’m ready to bring a new series to the forefront.” Honestly, from that moment, the story has changed so much. From the original pitch when the series was one-shots of Erica arriving to different small towns all across America to what it is now, what I see as a long-form horror novel told in comic book. I’m very, very excited for everything that this can be and excited to be back to doing creator-owned work, where I can really get into some of my most personal feelings.

Eric: Speaking from Boom!, without blowing smoke: James is a foundational talent for us. From The Woods, The Apocalyptic Trilogy, UFOlogy, and beyond y’know. It’s been a pleasure of mine to be working with James for the past six, seven years. And we’re excited to have Something is Killing the Children to kick off a new phase for James. As you’ll see once you read it and it gets out to the readers’ hands, it really is a new step for James, creatively and artistically. We’re proud and excited to continue be a home for James’ comics.

The Rest of The Team Behind Something Is Killing The Children

BNP: Eric, specifically for you, how did the artist, Werther Dell’Edera, get involved with the project?

Eric: So bringing Werther was a team effort. James and I work very closely with each other, and once we have a project up and running, well he has a vision. We try and find a partner for him that can actualize that and can play into strengths and tones of the particular project. Michael Dialyna on The Woods, for instance, was a perfect partner for that book. We’re really excited for what Werther has brought to the table with Something is Killing the Children and feel like he’s just a great fit for this particular project. Not to discount Miquel Muerto who is the colorist of the book, who works hand in hand with Werther. James and I are incredibly happy with how the team has kind of meshed and come together. Right out of the starting gate, Werther really showed he was born to draw this book. The character of Erica Slaughter was really well formed in James’s head, but once Werther sent in those designs he added little flourishes and adjustments that we didn’t even have in mind that made her even more real. 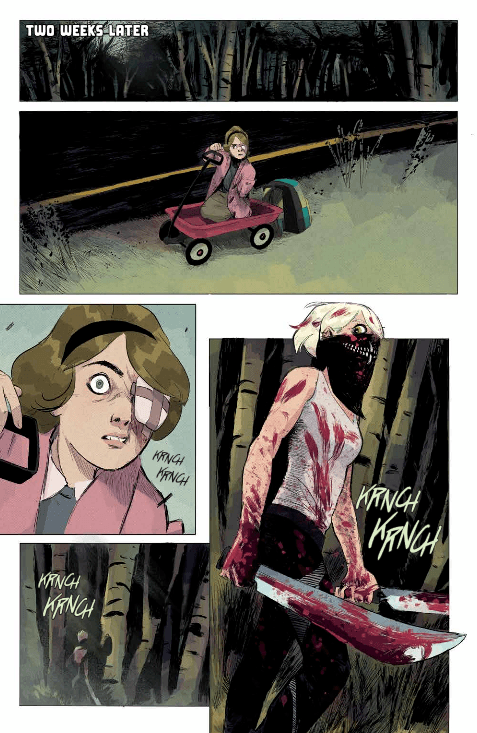 BNP: Who’s idea was it for the bandanna?

Eric: That was all Werther. And it’s details like that that brought the design together. I’m very happy for that bandanna because I feel like it’s going to be very iconic.

BNP: I mean when I first saw it I thought it was very visually striking, so I think that’s a safe bet.

BNP: Now, James. One of the first characters we get introduced to in the first issue kind shares a lot of your back story, between the name and Wisconsin upbringing. What’s it like putting a lot of yourself into a character like that?

James: Honestly, it can be intimidating at times. I’ve talked about this before, but when I set out writing the first issue, I was honestly using the name James as a bit of a short hand. It was just me trying to cut right to the heart of what I thought this kid should be, which was kind of a mirror of me at this age in seventh/eighth grade. The end of middle school, right before high school. I wanted to capture the feel of the sleepovers I used to have with my friends, so I just wrote my name in there and I wrote the name of all my friends in there. I didn’t expect in writing that first issue, and writing my younger self witnessing the death of my closest friends — who are friends that I still have in my adult life. It allowed me to jump right into the skin of the character and see what that would do to that younger James, and how it would shape him and how it would build. Honestly, it opened an entirely new personal edge to the story that kind of unlocks it for me, and unlocks the type of book I want it to be. Even though I was writing in the issue, I was still sort of expecting the name of the character to change as we were moving forward. Quickly I realized “No. This character is James. And I need to ride with this decision.” 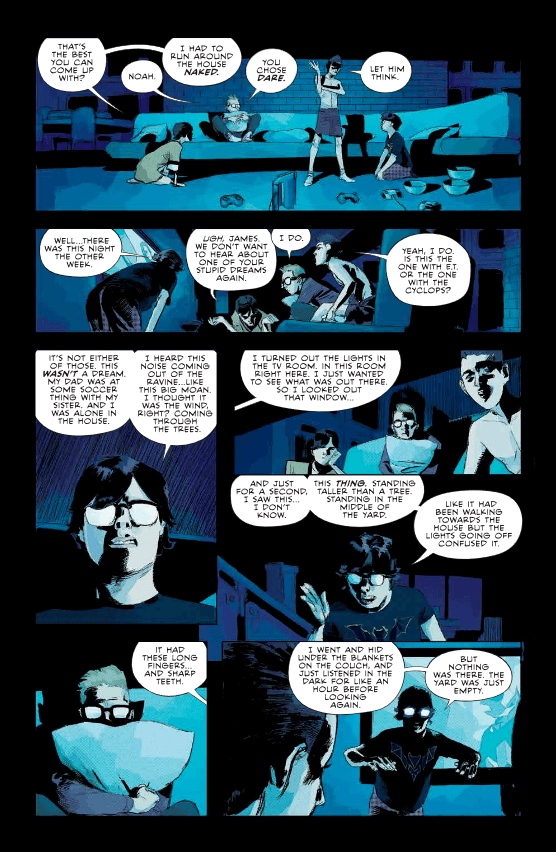 BNP: So, you talked about Erica Slaughter a little bit earlier. What can we expect as readers going forward in this on-going series? Will we see more of her perspective? And will we be staying in Archer’s Peak?

James: Archer’s Peak is definitely the core location of the series. You might see how what’s happening there spills out to the world around it, but in terms of this long-form comic book horror that we’re writing, this is a story about the small town of Archer’s Peak and the monster hunter that arrives there. Those were the priorities. James is a core character, and really the main character of the story, but the balance between the mystery of who is Erica, what is she there to do, does she know what she knows, and the town. Sometimes, the camera will shift to other figures in the town of Archer’s Peak and how they view Erica. Again, those are the two priorities: the town and Erica, and how the two clash. They both want the same thing in the end, but they don’t understand each other.

BNP: For both of you, what were your favorite scenes/moments in the first issue?

James: Honestly for me, it’s the principal scene. The scene where James was called into the principal’s office. I remember when we were talking about the series in the beginning and didn’t know how long it was going to last, I asked myself “What is the importance of that scene in the larger narrative?” We had a long conversation about it. But it felt so important to see the impact of the death of these kids, not just on James as the main character, but in the town around him and the adults around him. That helped me capture the feeling of the book. 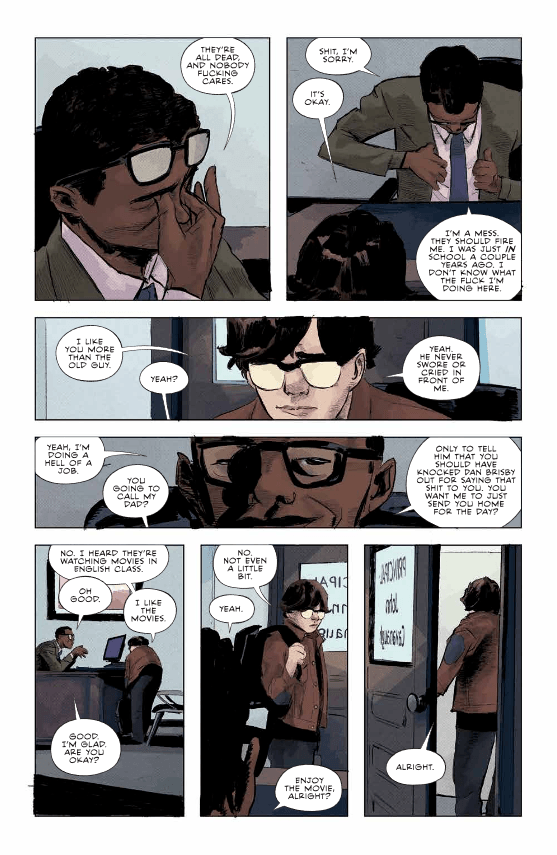 Eric: My favorite is the opening. It’s kind of two scenes, so I’m cheating but everything pre-Credit Splash. Pages 1-5. I really responded to how real that sleepover felt and how lived in James and Werther were able to make this group of kids. Just staring out into the woods, the room lit by the TV glow, empty bowls of popcorn on the floor and everything. And that’s the story that James, the character, is telling and how the reader gets kind of pulled into it. And then before you know it, the page turns and the lights flick on and he’s in an interrogation room. It was unsettling in the best ways and allowed us to push out the monster until the end of the issue. Like James said before, let’s us simmer in that dread. What did they really see? We don’t find out for quite some time. 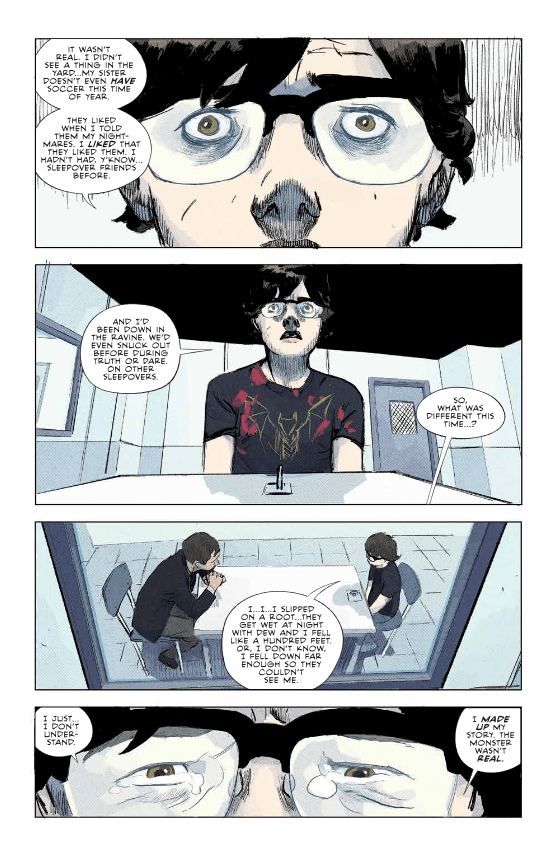 [Writer’s note: Cards on the table, my favorite scene was also that the principal scene. It was a very cool mix of exposition and personal grounding.]

BNP: Is there anything you want to share with our audience?

James: I’m just super excited for everyone to see the world that Werther, Miquel, and I have built and this is a book that is very personal. It’s a strange book. It’s a frightening book. The support that people have shown it already is incredible and now it’s my job to write a book worthy of that support and keep you all reading. I’m really excited to bring you all to Archer’s Peak and introduce you to Erica Slaughter and her entire world. 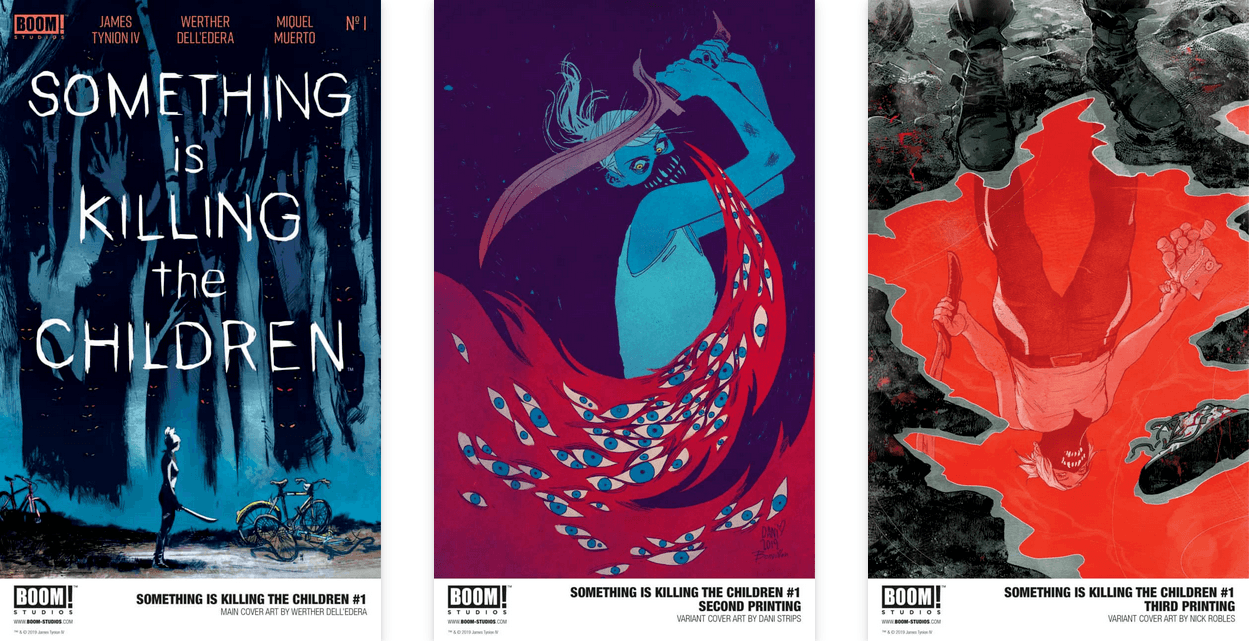