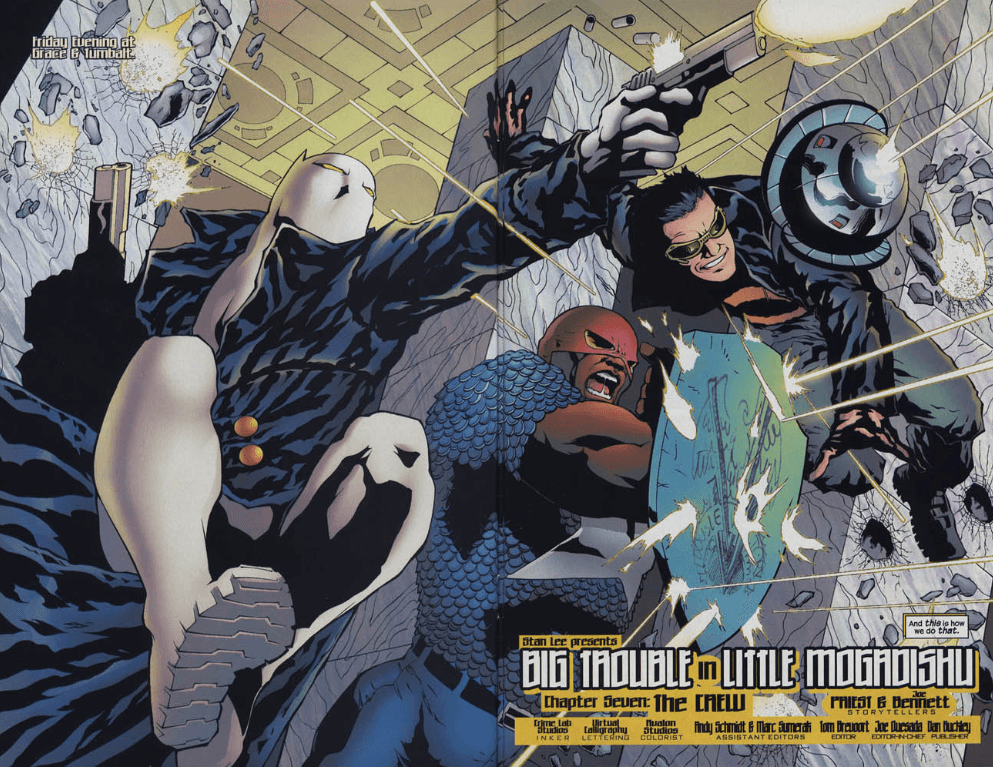 114 Shares
[quote_simple]”He came back, in the same suit that he was buried in.”- Wasalu Muhammad Jaco [/quote_simple]
Lemme tell you something you should already know. It’s so hard being a Black nerd out in these Streets of Rage, man. You out here looking for characters that look like you up in a fandom, you out here just trying to see yourself in what you enjoy. You just trying to see you, ya peoples, LGBQTIA+ or POC folk out here flourishing up in the fandom too. Which is why when you do get a sliver of that shit, you Gollum onto it and hold it deep to your chest because you never know when you’re going to see it again. Now before we move forward with this article we gotta go back. We gotta go back to July 2003 when Christopher Priest and Joe Bennet dropped The Crew aka one of the most underrated underrated comic books to ever bless Marvel Comics’ roster.

The Crew was the comic book version of The Wire and while y’all were struggling to get through season 2, I was reading this shit and fucking loving it. This Atmosphere of The Crew was so Black, so POC, and best of all it was straight up sophisticated gutta gutta. This was one of the fucking grimiest books I ever got my hands on as well as the most self aware. 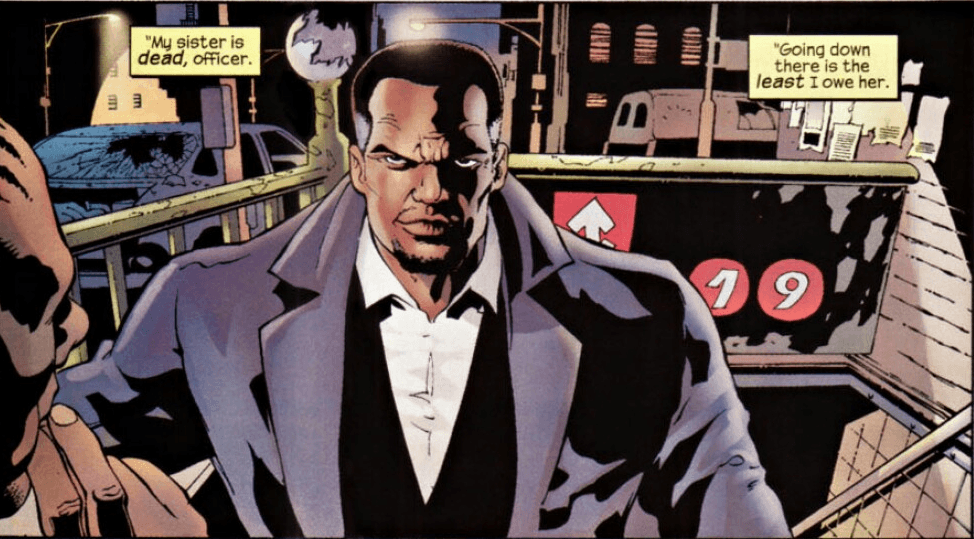 The Crew dealt with gentrification, poverty, crime and espionage to a whole ‘nother level. I couldn’t believe how hood the shit was and I fucking loved it. The best part was at the center of it all was James Rhodes aka War Machine but bruh, he was not on that War Machine shit in this series, fam. Rhodey was on “I’m bout to bring this whole shit down with just these hands you goin’ catch and these skills I acquired.” His sister got murdered in Little Mogodushu and Rhodey declared war on the 66 bridges gang (and Triage) that was running the city. We got to see that the War Machine armor isn’t what made Rhodey that dude at all, if anything he operated as much more of a beast without it.

Rhodey would get his revenge and fate would have it that he would be joined by a motley crew of people. Josiah X, The son of the first Captain America aka Weapon Zero, Isiah Bradley. Josiah was a Black Muslim conflicted as fuck about rocking them stars and stripes passed down to him. Kasper Cole, a Black and Jewish officer who had a short stint as The Black Panther before becoming the White Tiger, an acolyte of Wakanda. Rounding them out was a burned spy named Junta who keeps a tech robot that talks with his moms’ speech patterns and native tongue as well as a belt that helps him regulate being a Black hole. Priest highlighted each character’s development in individual issues giving each their own struggles and choices to decide who and what they were going to be. Yeah, these were the homies, man. 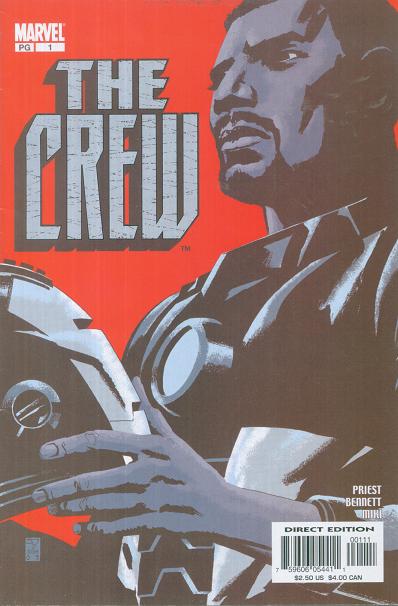 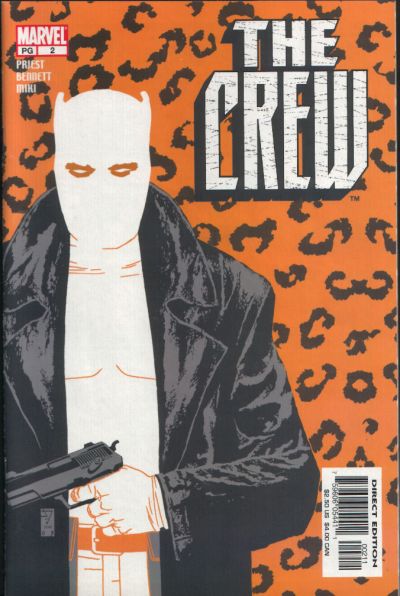 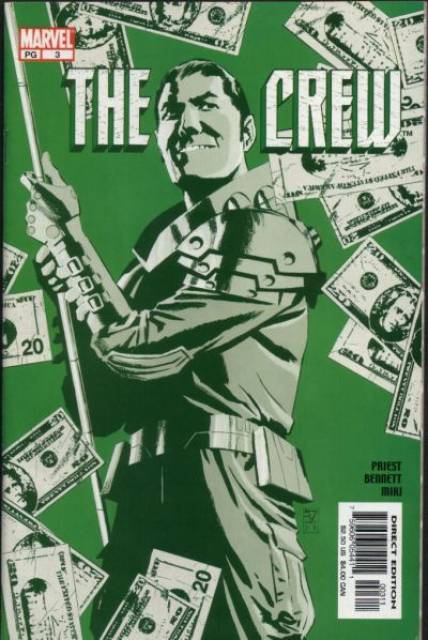 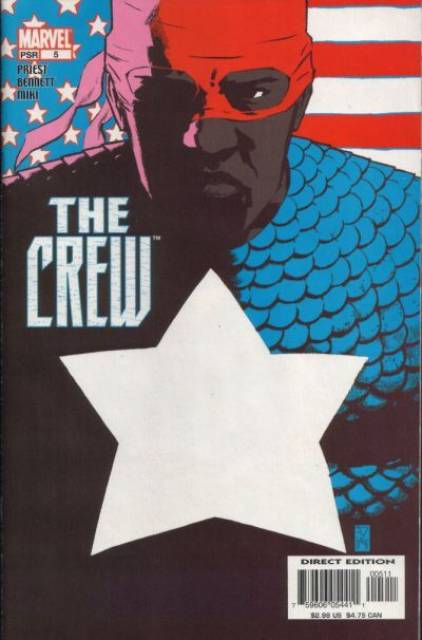 Yo, this book was before lit. This shit was ignition. I ain’t ever seen muh fuckas rep they hood like this, I ain’t ever seen Rhodey beast in charge like this, my body was ready for this series. It was Top Five Alive to me with only a few issues out. I was waiting for more but Marvel said, “you tried it,” and this series was canceled after only seven issues. I’m like cool I’ll see them in other folks books, right? …right? Noooooooooooooope. You wanna talk about heartache? You wanna talk about pain bruh? This was my Fire Fly.

You mean to tell me this great ass roster, this great ass book, this bomb ass creative team just goin’ fade into the void? I gotta Bone Thugs and Harmony my feels up and meet this series at the cross roads, yo? I gotta Boyz II Men End of the Road right now? You telling me I gotta figure out How do I say goodbye? Hol’ up, hol up’ I gotta get the camera pan close up to me with my eyes closed, open them up then Whitney Houston “and I-iiiiiiiiiiiiii-eeeeeeeee-I-iiiiiiiii will always love you” right the Black now?!

Now snap back to reality in present day. The Crew is buried in my mind’s time capsule next to the memories of when my fave musicians weren’t problematic and when fruit snacks were actually fruit snacks and not gummy bear rip offs. In present day The Crew is the farthest thing from my mind. I’m out here not believing Marvel knocked Rhodey in Civil War II, it’s been over a month since it happened but I’m still “what the fuck?”-ing about it. As Sam Wilson gives the Eulogy for Rhodey’s funeral and Kasper Cole can be seen in attendance. It was nice to see my dude but it’s been damn near a decade. Then I saw the solicitations for Marvel were released and I’m scrolling down and then I see the cover for Black Panther #7…

*Proceeds to hit caps lock button so you know it’s real* ARE. YOU. FUCKING. KIDDING ME? SOMEBODY PUT THE PHIL COLLINS IN THE AIR TONIGHT DRUMS ON RIGHT THE FUCK NOW! NAH FUCK THAT GIMME THE KORRA SEASON THREE TRAILER DRUMS! NAH, FUCK THAT. GIMME FUCKING- GIMME FUCKING-GIMME FUCKING HOMEBOY SANDMAN AIR RAID DRUMS! TURN MY HEADPHONES UP! TURN MY BLACK UP IN THE HEADPHONES UP!

You telling me that Ta-Nehisi Coates & Marguerite Sauvage (cover art game savage ) out here paying homage to The Crew right now? I had to leave my seat for this shit, I looked at my co-workers in utter disgust because I couldn’t even talk to them bout this. I waited thirteen years for this shit man. Thirteen years!

We’re not getting any of the old members but the new roster is just as freaking trill man. I love when creators pay homage and build that homage into a new direction while nodding back at what was done prior. This is much needed as it shows that Rhodey was Marvel’s muh fucking Lester Freamon and way more than Tony Stark’s best friend. Woooooooo Coates you crazy for this shit right here. It’s one thing to step into the comics realm for the first time and murder it and it’s a whole ‘nother story when you’re like, “Oh remember that obscure bomb ass series not a lot of you may know about. I do. And we finna touch on it. *spikes microphone*” That’s like a dope ass writer knowing the secret hand shake of your fandom. The atmosphere looking sooooooooo Black too tho? Ughhh! Yes. This is what dreams are made of right here. This is that real trap raw representation I been talking bout!

“Do you believe in miracles?!”