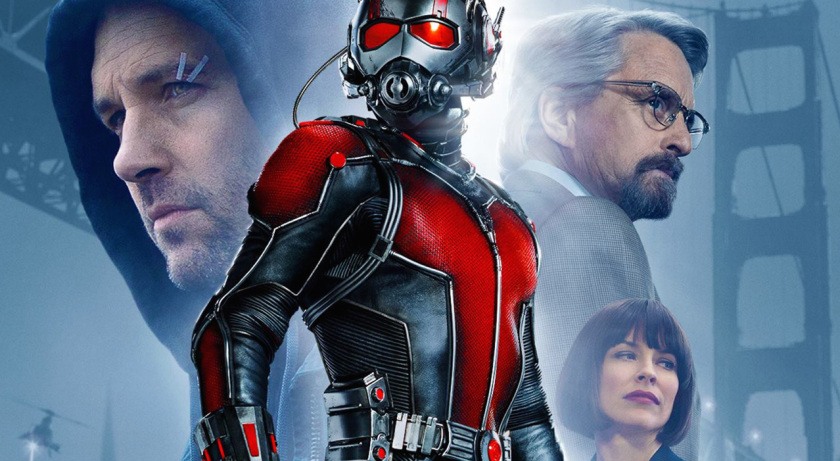 About a year ago when the movie was announced, I was like “Why do I need to see an Ant-Man movie though?” I’ve been following the comic book series, which is pure 100% raw Vibranium, and I like the characters as well as what I was seeing from commercials for the movie, but I wasn’t trying to get my hopes up when I went to see it. I saw it after opening day, and I gotta say… that shit was fun. I actually love seeing obscure/non-household names shine in panels when it has a good writer, but I was so worried it wouldn’t be the case on film. I’m happy I was wrong.

Ant-Man is a very different movie from anything else Marvel is giving us. We’re not seeing a large, wide-scale event of the world in danger — instead it’s scaled down to the exact discovery that would be become a global-scale catastrophe. Michael Douglass was a fucking glorious Hank Pym. We get a brief synopsis of his Pym Particles invention that’s able to shrink a person or objects down to incredibly small size. The problem is what happens when you put that technology in the wrong hands, especially those wanting to mass produce that technology as an army perfect for stealth, espionage, and sabotage.

Pym’s protege Darren Cross (Corey Stoll) has been obsessed with replicating the Pym Particle and is extremely close to perfecting it and using it to make profit from the military (dick move, entirely). Pym’s daughter Hope Van Dyne (Evangeline Lily) is still working for the company close to Darren, but trying to help her father stop his plans. The best way to do that would be to steal the Yellow Jacket suit Cross created. A cat burglar trying to go straight finds himself unknowingly recruited into Pym’s scheme when his back is forced against the wall. Lang’s daughter Cassie is the main reason he is trying to do the right thing, which becomes a heavy thread throughout the film. Marvel is giving us the superhero version of Ocean’s 11. We see how efficient of a burglar Lang is when it comes to stealth, wits, and using his environment to solve problems instead of brute force. Lang is extremely proficient at what he does but is in his expertise with utilizing the abilities of the Ant-Man suit, to which Hope excels. Hope is the one to train Scott in learning how to sue the suit, but what makes this different than most hero movies is that Scott is learning the physics behind becoming one with the suit. He is learning the proper way to throw a punch due to the physics involved, and still maintaining an incredible amount of strength even when he shrinks.

“Punch too hard and you could kill your opponent, punch to light and they won’t even feel it.”

This is all about Scott learning to use the suit in order to add on to the stealth skills he already posses. The real drama of the story is the strain between Hope and Hank Pym due to the fact she is more than capable of handling herself. Hank will not allow his daughter to be the one in danger no matter how many times she has proven she is the woman for the job. It’s so hard to ignore this movie as blatant commentary on Marvel for not having a movie with a female lead (like Black Widow) despite how deserving the character is. This angle is addressed down the line in which the history of Pym’s wife Janet Van Dyne comes into play.

The visual effects for the movie were incredible. I loved the fight scenes, and my only complaint is ants can’t possibly be that cute. The humor was extremely well done, much to the credit of Scott’s friend Luis (Michael Peña) who had great chemistry with Paul Rudd as well as the members of their crew. Michael Peña is one of my favorite actors and his character steals the show on multiple occasions.

This is certainly a family-friendly film. It expands the Marvel universe in a different direction and Hank Pym throws an EXTREME eclipse amount of shade on the Avengers and Tony Stark. I can’t wait to re-watch it for that alone. The movie will probably be hit or miss for some, but it doesn’t leave you with a bad taste for the genre. Personally, I fuck with it. This is my shit and I doubt there will be a sequel (I’d be interested in how they would approach it though), but we know for sure this isn’t the last we’ll be seeing from Team Ant.