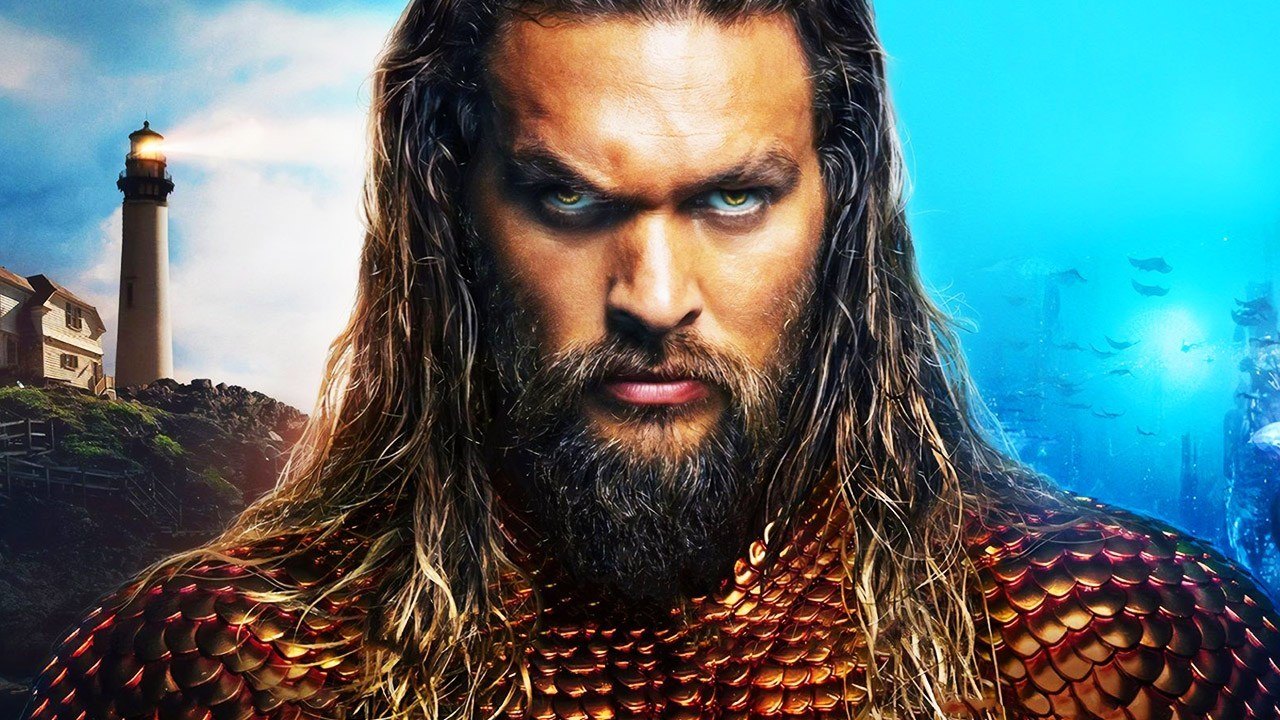 There are lots of reasons for movie fans to watch Aquaman. Maybe you’re watching to see if this is the DC movie that proves that Wonder Woman wasn’t a fluke. Maybe you’re a hardcore DC fan who’s gonna see all these movies, no matter what. Maybe you’re even a comics agnostic and you see all superhero movies, regardless of studio, because you need more heroism and popcorn in your life. Hell, maybe you don’t give a moray eel’s ass about any of that and you are interested in Aquaman because Jason Momoa and his abs are the stars. All of those are great reasons to see Aquaman — and this movie should satisfy all that and more. It won’t surprise you, there’s no new ground broken here. It will entertain you, provided you can overlook some things and embrace some others.

This take on Arthur Curry, son of Atlanna, heir to the throne of Atlantis, feels pretty fresh. He’s not a big thinker: he’s just cruising through life, getting drunk with his dad, saving folks on the high seas from piracy. In theory, he’s also sometimes superhero-ing with the Justice League, but none of those dour, law-abiding citizens feature in this flick. In fact, as I think about it, there isn’t a single reference to the rest of the “team” to which Aquaman theoretically belongs. Maybe the movie makers didn’t want to get too encumbered with all that.

What this movie does embrace is Jason Momoa’s Aquaman as a loveable, shaggy waverider who knows exactly how sexy he is and loves every minute of it. In an early scene, he gets drunk with strangers in a bar, a tale told in selfies that would look right at home in any frat brother’s Instagram page. Next scene he takes his dad, also drunk, home with the kind of tenderness that men often show each other, but seldom on the big screen. Then enter Mera, in a wig so aggressively red I’m surprised it didn’t hit anyone in the face, and the plot of the movie kicks off. The movie balances the violent – I bash things until they give up – personality of Arthur with his more jovial, casual traits, producing a likable hero to build not just this, but future movies around. 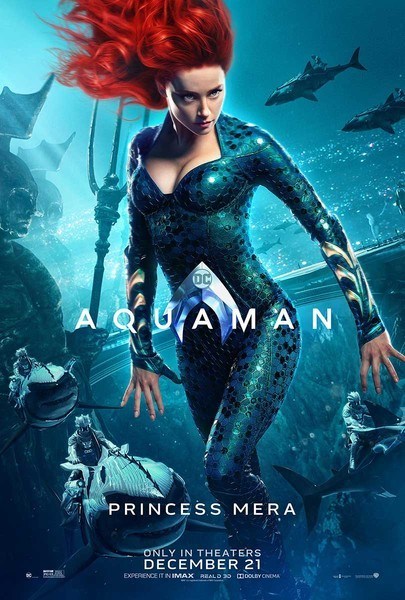 They gave Momoa a solid supporting cast. Nicole Kidman and Temuera Morrison really class the place up with restrained desire as Arthur’s parents. Willem Dafoe is dependable as ever as the viceroy (and dude who could have saved us all by smothering baby Orm in his sleep), Vulko. Dolph Lundgren gets in it as Mera’s dad, King Nereus. Patrick Wilson plays a pretty boring villain in King Orm. It isn’t really his fault, he’s just the pureblood, boring, blond guy who can’t figure out why no one likes him. On the bad guy side, he’s utterly outshined by Yahya Abdul-Mateen II’s Black Manta, who’s full of energy, hatred, and justice. Abdul-Mateen is so watchable. He does a good job of explaining that weird head thing that Black Manta wears and grounding this old menace in a new age.

The real co-star here is Amber Heard (and her hair) as Mera. She does a steady job of being the grounded, goal-oriented one in this couple. She’s not super observant — when your creepy stalker boyfriend gives you jewelry, just assume it is for nefarious purposes — but she has a cool superpower. There’s no point where she’s a damsel to be saved. And when it comes time for the predictable single kiss between Mera and Arthur, she jumps to it with enthusiasm, practically scaling his pecs to get her leg around his hip. Solid work.

Arthur and Mera have a’ight chemistry overall, though Momoa is better at giving his glowing stare direct to the camera than he is at giving it to her. Their relationship has the most obvious set up I’ve seen on film outside of a Disney princess movie. Actually, this basically WAS a Disney princess movie. Complete with a mean step-sibling, a mysterious mentor, and thinking your mother is dead.

Plot Theft on the High Seas 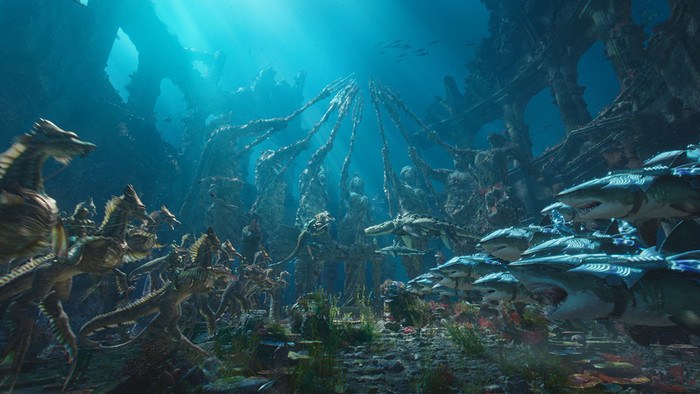 It is almost too obvious to talk about how this movie relates to other superhero movies. All media borrow themes and tropes, but comics as a field has raised that self-referential nature of media to a high art. Getting the references to other comics is part of the enjoyment of it all. What this movie does is take the “did you catch that” game to a whole new level. There are so many bits of other movies in Aquaman, I’m not sure it is intentional. My friends and I spent 30 minutes after the showing counting all of the references/stolen angles/borrowed twists throughout the movie. I”m honestly not sure there is an original thought within the entire 2 hour, 22 minute run time.
Movies that Aquaman shamelessly steals from, a short list:

This is a diverse list, which gives an idea of the scope the movie tries to cover. It doesn’t cover all this ground well, but it did do so in a way that left us laughing in our seats.

Laughing AT is a Thing

When I say laughing, my friends and I laughed AT this movie quite a bit. There were many nonsensical moments. Folks know things there is no way for them to know. Time moves irregularly — Black Manta builds a supersuit in the time it takes for Arthur to fall down a hole. Mera, who’s never been on land, let alone into an airplane, launches herself out of the side of one like a professional trick parachutist. No one is sure of the difference between Greek mythology (from which the Atlantis stories originate) and Roman history (which is, generally speaking, stuff that actually happened). Everyone heals with the snap of the fingers, a cup of tea, and a pile of seaweed.

All of these things may seem like details, but they are distracting details. The plot hangs together okay in the first half, with just these funny questions here and there. As the movie gets into the half, these details pile up, to the point where I wasn’t clear on anything beyond the core plot: get the thing, become king, save the world. And the last 30 minutes? Fergettaboutit. Just lean back and enjoy as the whole thing kicks into overdrive. 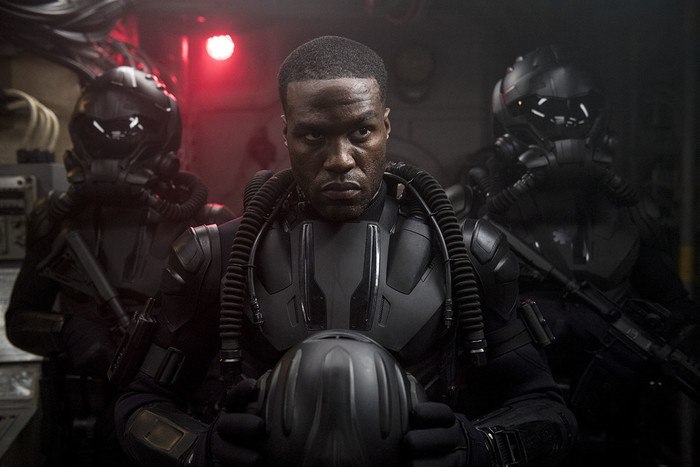 I have to put this on the record: Black Manta got CHEATED. He’s a great villain with a strong set up in this movie, but he was criminally under-utilized. Not only in terms of the movie, where he features in a few scenes and a few fights but also in terms of the DCU. Black Manta is a Lex Luthor style supercriminal, who’s just smarter than everyone around him. He’s got plots in plots. In the movie, he’s used like a screen, pushing Arthur towards the confrontation with Orm. He’s such a strategic thinker in the canon, I’d have loved to see that. Maybe the sequel (there’s always a sequel).

What I will say is that I didn’t feel like the movie ripped off Black Panther as much as predicted. Sure, there were some cool scenes in Atlantis, and it had the whole “secret world” thing going, but Atlantis didn’t have the spark of Wakanda. The scenes in Atlantis reminded me more of the elf scenes in Lord of the Rings, with lots of pale people with long flowing hair and far-away looks. Yeah, imagine Rivendale and Lothlorien were sunk under the waves and the elves learned to ride terrifying sea horses and took up a love for blood sports. That’s what Atlantis is like.

Laughing WITH is also a Thing 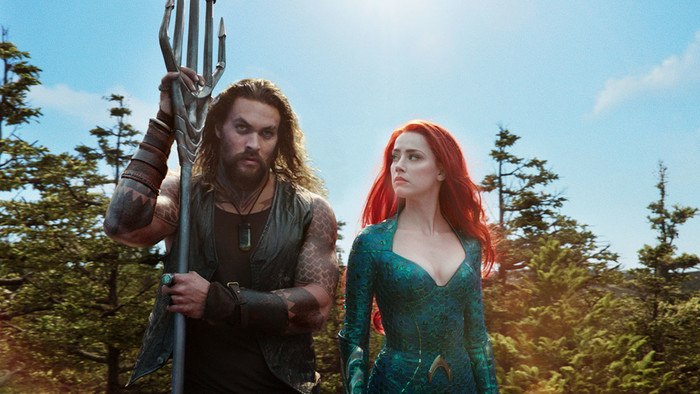 With all that said, Aquaman is a fun, soft core sexy movie, definitely filmed with me and people like me (students of the male form) in mind. Here’s how much they know their audience: Every time Arthur walks on screen, there’s a rock star chord riff. At least once every 15 minutes, we watch him walk away, all back muscles and patterned tattoos. Then he looks over his shoulder direct at the camera: hair wind tossed, eyes smoldering, shoulder flexed, tattoo perfectly positioned. It was like the movie poster was placed throughout the movie, so you wouldn’t forget what you paid your money for.

The action scenes were quite good. They weren’t revolutionary, but the cinematographer did a cool 360 thing to all the fights, whipping the camera around the action so you could see it from all angles. They polish the fights with Kidman or Heard just as much as Momoa’s fights, which is great to see. The camera flexiblity that is employed even allows the movie to move between two fight scenes happening simultaneously on opposite sides of a town. You can see how each fight impacts the other and how they’re moving towards the climax. It is a very cool effect. Not all of the special effects are good — some are distractingly bad — but overall, it gets the job done.

On the topic of themes and stolen tropes, there’s one that Aquaman doesn’t use: he is never a tragic mulatto. He’s not “half a person” in any sense. There are definitely characters in the movie who call Arthur names: half breed, mongrel, etc. But the movie itself never treats him like he’s half done. He doesn’t have half powers. He’s a whole person, on water and land. His tragedy comes from missing his mom, not from her love for his father. It is a welcome change of pace from so many other “half breed is the source of the conflict” movies.

Colors, sounds, effects, explosions, kissing! Aquaman wraps with a fantastic bang that reminded me of why I love superhero flicks in the first place. They’re just so damn exciting even if they don’t make any sense! I can recommend Aquaman as a fun couple of hours in the theatre. It isn’t going to re-write cinema or anything, but I do think it keeps DC in the running for being able to produce an enjoyable movie that entertains fans and casual watchers alike.

Aquaman is out in general release this Friday, December 21st.

BNP has you covered for all the Aquaman news, reviews, and commentary. Find it all together here.

All pictures courtesy of DC Comics.