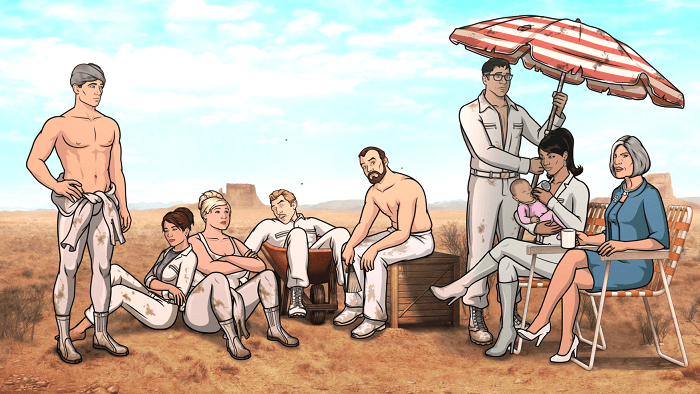 And thus completes another season of cable’s most watched animated show. And it was ok. The middle stretch of episodes were spectacular, but the third act of the season limped to the finish with a lot of rehashed rehashes, a relationship front and center that was pretty unsatisfying, and probably one of the weaker season finales the show has had (depending on if you liked the Archer Vice season finale, which I did). There were still a good amount of laughs in this one with some time honored traditions being recognized (like Ray being crippled) along with a neurotic and delusional expert on the ship played by Portlandia’s Carrie Brownstein (just like Bryan Cranston’s astronaut from season 3 and the aquatic terrorist from season 4), but it wasn’t really enough to make this a great episode.

Some of the funniest dialogue came from Malory and Agent Hawley as they both argued about the mission and how much baby A.J. should be fed. One of the reasons that we review Archer on the site is because for a mainstream show, it might be the king of obscure nerd references and having “TV’s Michael Gray” be part of the plot (the star of the 1970s Shazam TV show) is as obscure as it gets. Especially since he was voiced by Michael Gray himself. The jokes involving him were hit and miss, but it was just the right amount of strangeness we expect from this show.

Even though the episode didn’t blow me away, I will say that the ending, or resolution, rather did make me laugh out loud in an absurd and surprising way. Some misdirection by the show was really well done and made for a hilarious conclusion to the mission at hand. The ending hints at yet another reboot of the series, which I have no idea how to feel about. In one hand, I trumpet the bravery and innovation of a move like Archer Vice, but on the other hand I acknowledge that season 5 and 6 of this show are probably the weakest of the series. Archer was renewed for a 7th season a while ago, so we’ll definitely get to see what they come up with.