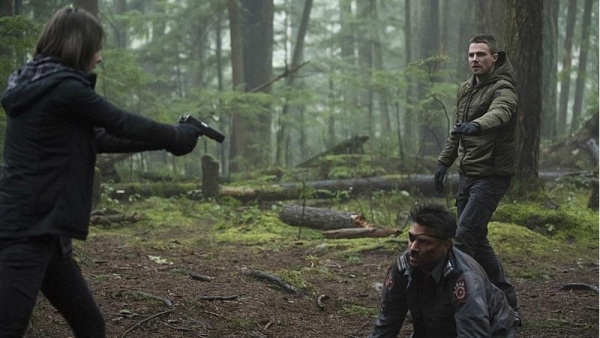 Welcome back to Lian Yu mutha fuckas, the two-star resort with all your needs—we got scenery (a giant-ass ocean); we got hospitable living conditions (sleeping in the dirt); and we see Thea and Oliver Queen enjoying the devil stick recreation the island has to offer.

Look at all that sibling bonding. Later on, the Queen siblings are eating a questionable animal when Thea gets on the subject of Sarah. Oliver is like “Weeeeeeeeelp its time to hit that ooooold knapsack.” Yeah man, Thea still don’t know she the one that gave Sarah the pink slip treatment. Ollie then goes to check on Slade in his cell to discover that he has escaped—or rather Malcolm Merlyn set him free. Also, we got to note that they had one agent guarding both Slade and Captain Boomerang. Really? Y’all left cadet Josh there by his lonesome? What the fuck you think was going to happen man?

Ollie: ARE YOU SERIOUS!?!?!? YOU FREED SLADE WILSON?!?!
Malcolm: It’s what Twitter wanted, Oliver.
Ollie: WHAT DOES THAT EVEN MEAN?!?!
Malcolm: Look. We need to get back to that killer music, baby. Y’ all need to be animals again. The ratings are down, Ollie. They saying you gone soft this season, B. I’m trying to help you out. Now if you’ll excuse me I gotta watch my stories. Don’t call me back on this number unless you’re dead.
Ollie: That doesn’t make sense, Malcolm.
Malcolm: Whatever. TROLLING!! HAHAHA. *hangs up*

Oliver told Thea shit was going the fuck down. Slade free and aye body bout to die. He runs back to a grave where he buried a gun so that Thea can arm herself. I’m sure that gun will work just fine having not been cleaned—it’s probably rusted and filled with dirt, but yeah, it should be good. Ollie goes meerkat real fast as he realizes it’s too late.

Slade baaaaaaaack … and apparently he’s Lil’ Mac from the Super Punch out / Smash Bros series as he is able to just knock everyone out in one punch. Where was that one hitter quitter back in season two, Slade?

Meanwhile, flashback to five years ago. Ollie is in Starling city again to stop Chyna White, who’s working with a dude from queens consolidated that Ollie recognizes. Then the plan is to get data on where dude’s headed from Queen’s company, which happened to be simple enough. Ollie then got a glimpse of Thea and sees that she’s been heavy into drugs. He sneaks into Tommy’s party with his green Abercrombie hoodie to threaten Thea’s dealer. The dealer was like, “Hold up, you Oliver Queen, you supposed to be dead *takes knife out* lemme help you with that.”

Ollie killed him with the Ultimo Dragon sleeper hold thoooooo. Then dumped his ass over the balcony. Son, police showed up and everything. Tommy’s parties were fucking baller back in the day. Cats, you ain’t even know in ya place dying—now that’s a fucking party. Maseo pulls Oliver away on some “Are you serious? You know you not supposed to be around your people.” Maseo also disses the shit out of his disguise which was hilaaaaarious.

We now know Ollie’s whole hood-and-grease-paint costume from season one was just an attempt to prove Maseo wrong on some “I DO WHAT I WANT” shit from Oliver. Ollie was going to leave Maeso, but after seeing a note from his father, decides to back him up and stop Chyna White. You’d think that be the end but Ollie has to go back to Chyna for one more debriefing.

Ollie and Thea wake up in the Argus jail. I’m wondering, did Slade drag them both there in one shot or did he make two trips (questions we need answered)? Slade letting Thea know Ollie still about his secrets before bouncing. Slade’s just leaving them there to die, as he will go back and fake their deaths … oh, and he is still upset about Shado which is so season one, man. Thea gets on that Sarah shit again and Oliver is like, “Do me a favor and dislocate your shoulder so you can reach this button to free us real quick.” Sorry, but if that’s me, we staying in that jail cell. I ain’t dislocating shit. Noooooooooope.

On the hunt to get Slade, Thea runs across a trap before being knocked out the way by Oliver. Oliver tells her it was his own trap. My man got tagged by one of his own traps dude. That ain’t very vigilante of you, Ollie. Thea then says its time for a break and brings up that Sara shit once again. “Why won’t you tell me how she died, or about who killed her? Ughhhhhhh.” Oliver then hits her with that truth about how Malcolm had someone under the influence in order to kill Sarah, that she had no idea what she was doing.

For real Thea? She who? She you, mutha fucka. What other “who” we talking about? Man, she ain’t even got time to process this shit ’cause here come Slade again. Slade was like, “I see y’all having a moment … ummm I’ma just come in and fuck it up right quick.” Ollie and Thea start taking Slade on, and I gotta say, I’m sorry, but I don’t care if he no longer has the mirakuru molly in his system; this is Slade Wilson we talking bout. I am not believing there is a way Thea and Ollie going to take this man down without Jesus himself having to tag in.

Thea pull the burner on Slade and listens to Oliver’s plea not to be a killer. They lock him back up in jail but the damage is already done. Slade gives Ollie one last troll before he leaves.

Slade: Daaaaaamn, homie. On Lian Yu, you was the maaaaaan, homie. The fuck happened to you? By the way your daddy, your momma (that was on me), Shado, Sarah and now even ya sister are lost from you. Not a good record you got goin there.

Back in Starling City Thea got all the “WTF is wrong with you” questions toward Malcolm. Malcolm is just like …