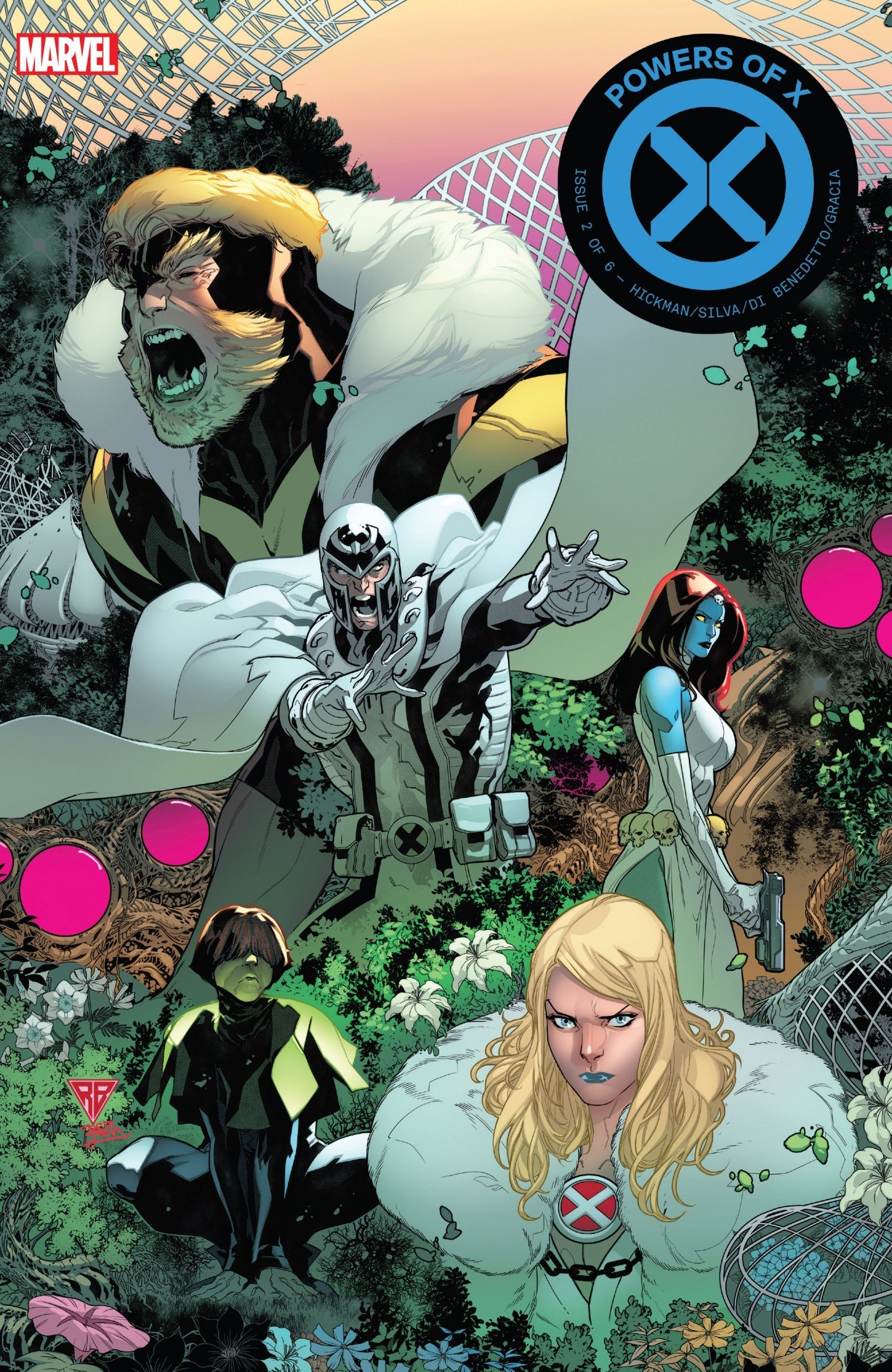 “Both of our dreams are fleeting and too small for the coming days . . . “

Sit back, relax, and set out a glass of your favorite drink of choice.  Whatever it is, you might even to want to prep two glasses.  “Powers of X” #2, as written by shogun pensmith Jonathan Hickman, reads like a masterclass on how to craft a multilinear narrative that spans centuries without sacrificing the ideological and emotional core that has sustained X-Men lore through the changing of many hands over the decades.  Whereas many lesser writers who shall remain nameless merely focused on the shallow superhero theatrics and vain melodrama of a overflowing mutant cast, Hickman tethers his story to the inevitable conflict of evolution amongst humans, mutants, and machines.

Survival is a thousand year war, one that requires enemies to become allies in the face of inevitable annihilation. The second issue of Powers of X picks up shortly after the end of House of X #2 where Moira Mactaggert reveals to Professor X that she is in fact a mutant. What’s her power, you may ask? Well, the ability to reincarnate herself up to eleven times with the knowledge of all her proceeding lives.  Conceptually and historically, this was as huge announcement, albeit a little illogical, even for comics. (From a Buddhistic standpoint, if one reincarnates,  time itself should keep moving forward; it doesn’t restart and place one in their mother’s womb again. If that is the case, then Moira’s mutant power is a cross between Tom Cruise in Edge of Tomorrow and Bill Murray in Groundhog’s Day.) Best not to linger on that, however, as there is so much more happening in this book that not only reinvests the dense history of X-Men comics, but expands between the lines of everything we thought we knew. Now, armed with the knowledge of her failed past lives and threat from the mutant Destiny to correct her path, Moira convinces Xavier that the only way for their people to survive is to work together with Magneto before the inevitable rise of the human-machine cooperative. 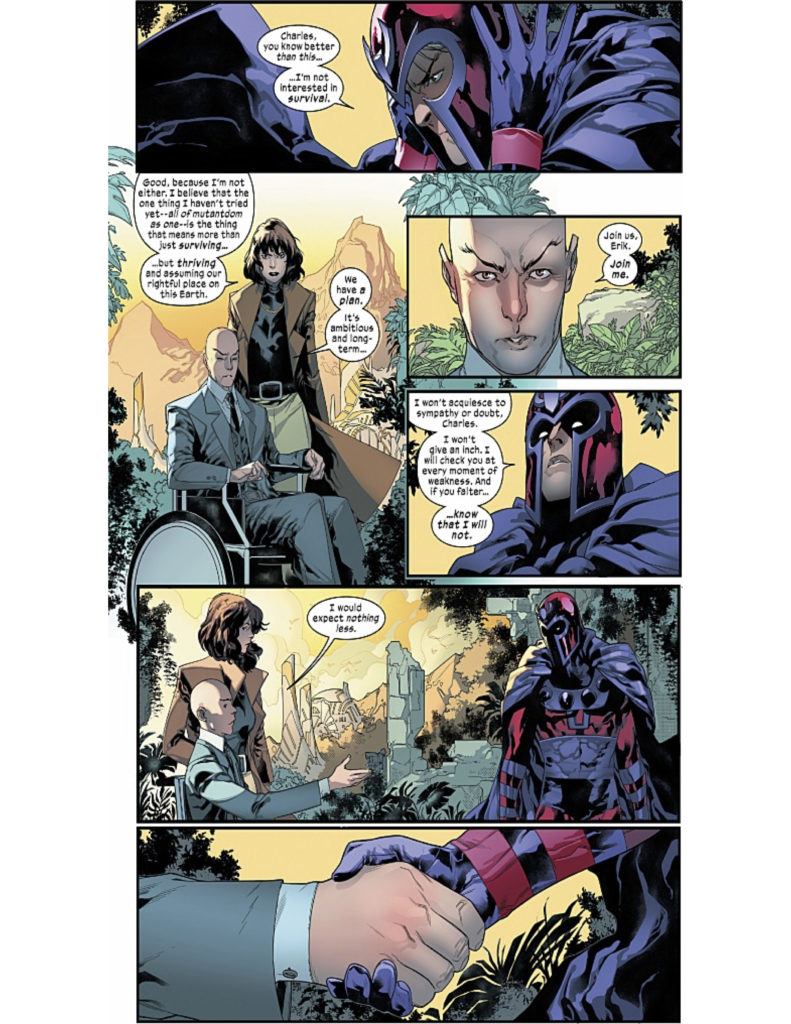 Hickman was not lying when he said both series need to be read for the full scale of the story to make sense. Much of what transpires in House of X ties directly into this issue.  Previously, Mystique led a heist with Toad and Sabretooth to recover what is revealed to be the schematics for the creation of Nimrod.  If the mutant nation is to survive the future, Nimrod must be destroyed before he is even conceived.  Cyclops, finally reconciled into a bold, confident version of himself, accepts the mission because “if it must be done, then it will be done.”  Meanwhile, in X-Men Years 100 and X-Men 1000, respectively, the future is both bleak and promising.  In the fashion of parallel narratives, the X-Men of Year 100 are a group of mutant hybrids recently returned from a heist of their own.  Led by none other than En Sabah Nur himself, they lose two of their ranks, but gain a piece of information (an index amongst the billions of pieces of data archived) that will allow them to destroy their greatest threat – Nimrod himself.  1000 years from X-Men Year One, in a world where mutants have prevailed, humans are kept in a preserve for their own good, and Nimrod now works as a mutant-friendly Alexa, a final ascension looms – the coming of the Phalanx and the possibility that all life on Earth will join a collective intelligence if deemed worthy.

Needless to say, the highlight of my week involves reading and writing about Hickman’s latest X-work.  Everything about Powers of X reveals not only his knowledge of X-Men lore, but his dariningness to push, bend, and challenge the relationship of mutants to not only Earth, but also time and existence. Parables upon parables upon parables await thee in these pages. Similar to how Hideaki Anno’s Neon Genesis Evangelion plays with the thesis of human instrumentality (sentient life merging into a collective consciousness), Hickman takes the conflict of evolution between human, mutant, and machine to a universal existential level through the idea that life and intelligence are part of a constant, unfolding struggle equivalent to “powers of 10” (get it?).  The pages of meta information separating the traditional panelwork of the story are necessary reading and require two or three more readings for the average fun to grasp how important they are to the story itself.  Welcome to the next level of X-Men storytelling.

Deviating from the bi-weekly schedule established thus far, Powers of X returns with its third issue on August 21st with House of X #3 on deck for August 28th. If we’ve learned anything from these dense pages, it’s that nothing happens without reason. For me, you, and everyone we know with an “X” on their hearts, Hickman’s twin limited series are the must read books of the year.  This is just the beginning and already it looks like the X-Men will step into 2020 with some well-deserved respect back on the brand.

Rating:  10 out of 10 Nimrod Soliloquies