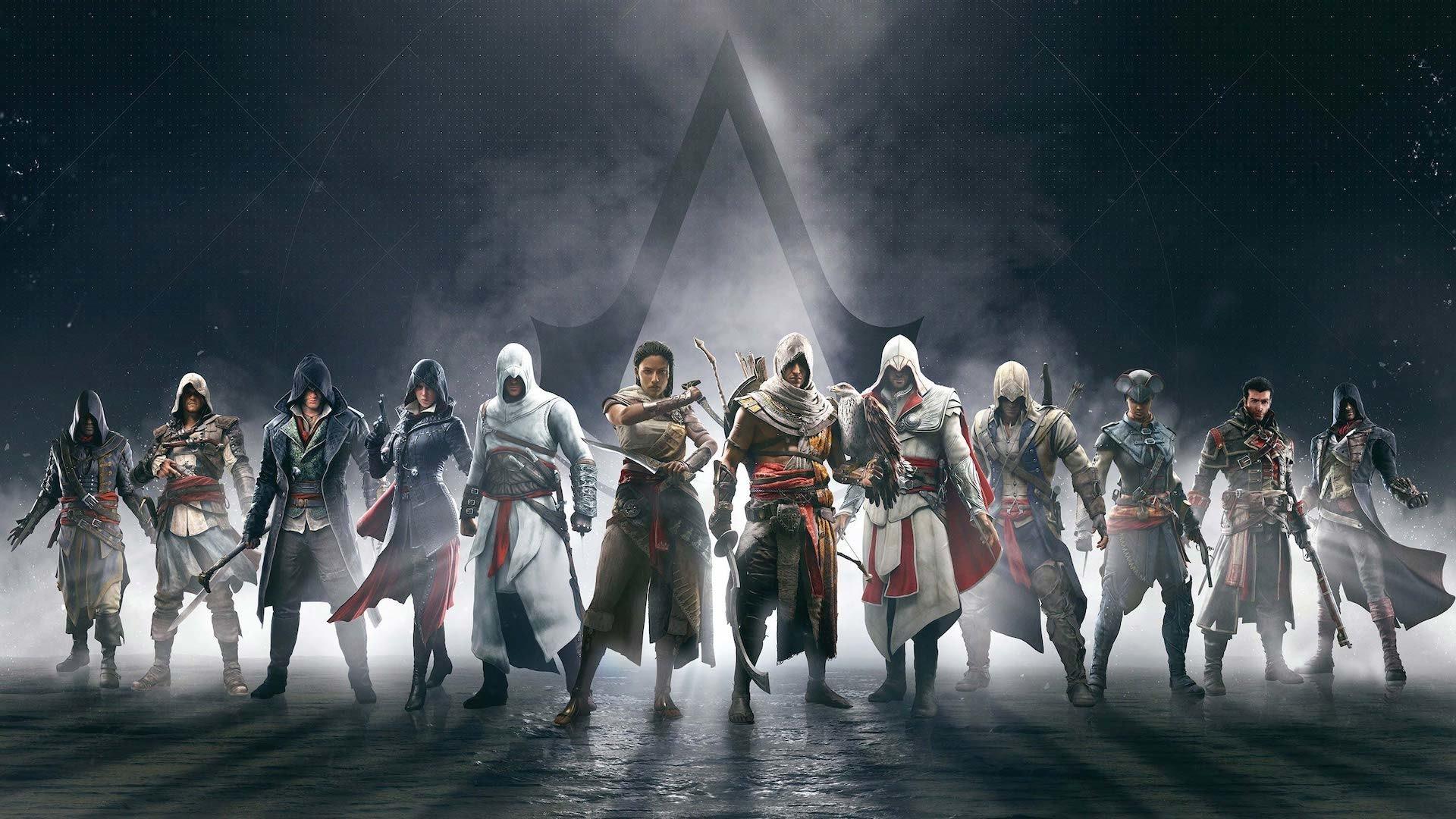 The world was just blessed with the debut trailer for Assassins’ Creed: Valhalla, and it was a thing of beauty, anticipated by all the gamers on staff at BNP. Ubisoft has been hitting us with these well-crafted cinematic trailers for Assassin’s Creed since 2007. There are so few properties out today whose heralding gets as much fanfare as the game itself, but this is one of those properties. Over the years, the trailers grew in length and as the franchise became a staple for Ubisoft, so did the marketing and production budget. The trailers have received every type of treatment the medium could provide. There are outsourced animated production house trailers, live-action, game engine footage, mixed media, and straight-up gameplay. If you put all the trailers back to back, it’s over an hour of video. I went through all of it to highlight some of the greatest trailers in the (very) long history of Assassin’s Creed.

[FYI: there are so many different types of trailers in the AC catalog. My personal favorites are the ones that combine the CG cinematics with some haunting song layered over it. It’s my jam. But let’s look at a few of the dopest.]

This one goes hard in the paint y’all. I’m biased though, it’s kind of my favorite trailer. It’s told out of time, which is super on-brand for Assassin’s Creed. It is the last game in the series that follows the exploits of Ezio Auditore Di Firenza (Pinkett-Smith lol) and it is brilliant.

This one has it all, it opens on Ezio trapped by Templars, then goes back to tell us how he got there. The song is an epic war march-like tune by Woodkid titled “Iron” (sampled for Kendrick Lamar and Schoolboy Q’s “The Spiteful Chant”) with heavy, thumping percussion and roaring horns. When Ezio is on the open seas and the horns kick in? You’re right there with him. This is the older, grizzled Master Assassin version of the character, and they let you know his hands still work when the fight scene erupts. He tore apart thirty Templars by his damn self in a fluid set of movements. The fight choreography alone is reason enough for this to be in the hall of fame, the ghosts that he sees during battle really make this trailer a complete work of art.

Sometimes a story is so compelling it demands to be told. In Assassin’s Creed IV: Black Flag, you play as the pirate captain Edward Kenway. However, the second in command NPC, Adewale, steals every scene he’s in. Adewale was so badass a character, his story so real, that he earned his own solo shot DLC. His DLC was so valid it was offered a stand-alone game! The game was so gangster, it got its own trailer. Fam. This one goes in the Pan-African hall of fame.

The Freedom Cry trailer is mostly live-action and portrays the meteoric rise of Adewale from capture into slavery in Nigeria to the plantations of Trinidad to the annals of the Assassins. They should’ve called it The Emancipation of Ade. This is a story etched in pain. Black pain. It gives the intensity of the AC revenge narrative visceral sense. The trailer is almost entirely slow-motion live-action vignettes spliced with a CG-animation of Adewale whooping ass. Cue haunting song…but make it African that blends into a rousing crescendo with the illest Nat Turner-type beat lyrics, “I never looked back Never wanted to. Never had to.” We see Adewale kill his slave owner, free himself, and grow into an assassin rocking a machete and a blunderbuss. If this ain’t the most splendiferous thing ever, I don’t know what to tell you. This trailer hits different.

The first game was roasted for repetitive gameplay but lauded for the complexity of its story. This trailer sums up what is so good about stories delivered in this format. It does the seemingly impossible and makes Altair look like a Hidden Leaf ninja.

Just a bunch of Templars around the table shooting the crap with one another, sipping on drinks, and recounting the difficulties of running an empire. This legit reminds me of Stringer Bell’s pre-show meetings with the crew in The Wire. These do not appear to be a group of men being hunted, they’re so nonchalant and braggadocious. They do talk about this mysterious person who appears as an ‘angel of death.’ They talking real reckless when they’re really scared as hell. They get their swords out and start swearing that they are the goods and can’t be touched. Then one dude doesn’t join in. He gets the look before he keels over with A KNIFE ALL IN HIS BACK. It’s a slow and subtle piece of media. But as the Templars turn out to face the darkness, knowing any one of them could’ve got the business a chill runs down the spine of the viewer. That’s a good ass trailer.

Whoever does marketing over at Ubisoft North America, they went in on this trailer. It opens with the penning and recitation of The Declaration of Independence. The ink and quill are moving then the camera pans into the page and becomes different scenes in the game. A visually stunning piece focusing on Connor Kenway (Ratonhnhaké:ton in his native Lenape) catching redcoat bodies! The obligatory ‘taking out ten enemies solo’ scene is underscored by the nod Connor gives to George f-ing Washington! It was so casual, just like a, “What’s good Geo? Ready to body some Brits?”. You can see the mutual respect in that head nod. The icing on the cake is Connor writing a practice draft of the Declaration, on the back of a dead redcoat! It’s the little things, really.

Assassin’s Creed III was an important project for Ubisoft, you can tell because this was about the time they made close to six or seven trailers for each game. This one stands out for its’ artistic merit, but also has a great cinematic trailer.

Unity was the testing ground for the property on the next-gen console. It was disappointing to most fans after release, but the hype train leading into the game was borderline grandiose. Assassin’s Creed had become a successful franchise and a household name, so of course, the trailer had to follow suit. The cinematic trailer only needed the homie Anne Hathaway in it to reach its final form: Assassin’s Creed: Les Miserables. The budget was huge and they spent quite a bit on this joint. You can tell because Unity has ten minutes worth of trailers.

It opens the way all AC trailers open, a sweeping vista of some newly playable region. This time, urbanized Paris, France. The obligatory eagle shot, the assassins at the ready on darkened rooftops, the usual. The well-traversed ‘haunting vocals’ drop and there lies the first moment of awe. I squinted and asked, “Is that…Lorde?” At this point, “Royals” was still playing on the radio and had people bopping. The very first lyric, ‘Welcome to your life/’ had me hype AF. Homegirl covered “Everybody Wants To Rule The World” by Tears for Fears and I was living for it. Especially as the trailer begins to close in on the graphic class warfare of the French Revolution. Guillotines on the street, Assassins bodying Templars with parkour choreography, the poor and disenfranchised snatching the bourgeoisie out they regularly scheduled cake. A thing of beauty. They even took the time out to design fight choreo that foreshadowed the co-op multiplayer the franchise was betting on. An easy highlight is the last scene of conflict where the Assassins leave the French general to be eviscerated by the masses. A lot of ‘people power’ themes in the trailer, too bad ‘the people’ weren’t feeling the game.

Assassin’s Creed: Origins pared all the rah-rah down from Unity into a redesigned and distilled gaming experience. We reviewed the game and the trailer told no lies. No filler, all killer. It opens on all we need to know about where we are: the pyramids of the Giza plateau. We in Egypt y’all! North Africa is in the building. We see the (assumed) big bad and the powers-that-be high-posting and treating the common folk like dirt. They take their sweet time establishing the scene before the ‘haunting vocals’ pop off, but they hit different this time. Is that the Canadian folk singer-turned anti-folk icon Leonard Cohen in the booth? Asking if you ‘Want It Darker’? This already bangs. In a true return to form, the beatdown scene goes back to one against nine, giving co-lead character Bayek the opportunity to show why he’s the Serena Williams of soul takers. My guy goes off. Every archer runs out of arrows, but not every archer uses one foot and one arm to finish the job! Bayek does.

Enjoy this rundown of dope Assassin’s Creed trailers, there’s a few left out (AC: Rogue has a great one), let us know your faves in the comments!