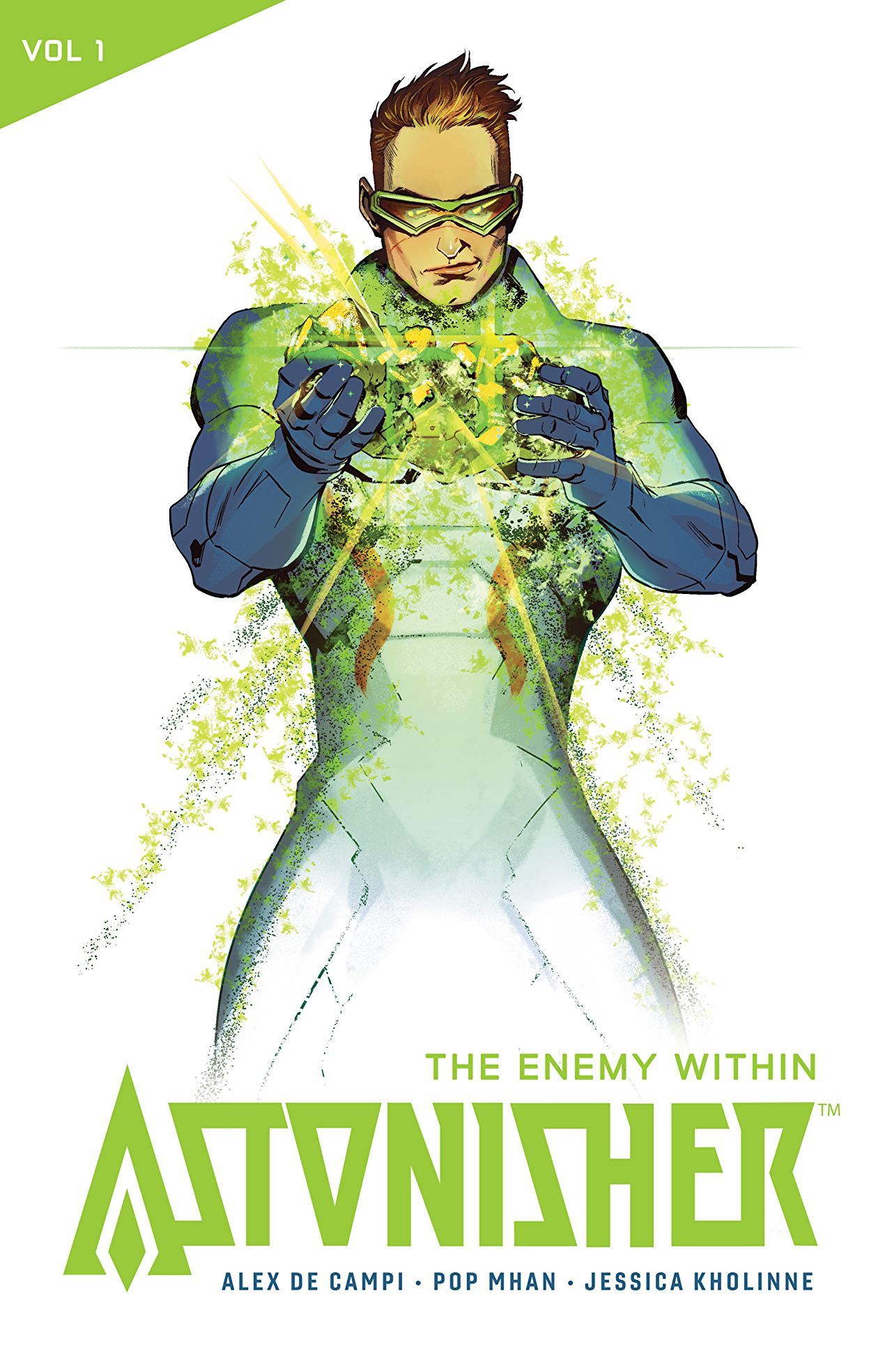 Imagine, if you will, a smoothie. I’m talkin’ maybe an apple juice base with some bananas and kale. Then maybe you can throw in some spinach and even a few slices of apple. It’s a pretty basic smoothie. Something you get all the time. Turn on that blender and everything mixes together with ease. It comes out cold, smooth, and it goes down easily.

Now imagine if the ingredients to that smoothie were aspects of a story. I’m talkin’ maybe a white male base with some wealth and privilege. Then maybe you can throw in a hot model girlfriend and a few jealous siblings. It’s a pretty basic story. Something you get all the time. Now, what if we threw some PTSD in that smoothie?

Have I lost you? Does my obscure analogy make sense?

Yeah, we got you, dog. But did you say PTSD? That’s like throwing ginger into the smoothie, fam. That’s changing the DNA.

Well, that’s what Astonisher is. It’s here to challenge your expectations about stories that you think you’ve heard before.

The series follows Magnus Attarian, a wealthy 30-year-old hotshot whose past hobbies include creating apps and trying to make cars that can travel through space. Yeah, he’s that guy. But after a meteor shower known as “The Event” came crashing down to Earth, Magnus lost a lot of his credibility due to his failed attempt to stop it. Now, a washed-up, disabled shell of his former self, he starts to develop powers.

Volume one spends most of its time with Magnus exploring his abilities while he grapples with their purpose. He is able to jump into the mind of anyone else affected by the meteors. He sees this as a way to return to his former glory, while his brother thinks he should be using his powers to help people.

What’s really unique about his power set is that he needs to siphon energy from a piece of the meteorite for his powers to manifest. Once his powers are go, he need only touch the affected person and he poofs into their mind, where he fights to eradicate the parasites nesting there. It’s a power that I’m not sure I’ve seen before, at least not in this way. He’s not shrinking down like Ant-Man. And he’s not just simply tapping into these other minds remotely. It’s like he’s actually transported there.

What Works For Me

Lion Forge has made a name for themselves by showcasing diversity, and Astonisher stays true to that in its own way. While the protagonist is the epitome of privilege, the series deals with issues like PTSD, depression, anxiety, and even a bit of body disfiguration. The cliché aspects of this series are one of its strengths. Yeah, these are things we’ve seen before, but De Campi seems to want to show that these types of stories and characters can deal with relatable issues as well.

The art is something that I really enjoy. Mhan does a really good job flipping the switch from real-world applications to some crazy out there John Carpenter shit. And the art of coloring is severely underrepresented most of the time, so let’s talk about it for a second! Jessica Kholinne incorporates a specific color palette. I feel like all the real world scenes have a yellow dingy hue to them. Maybe a metaphor for the stale life that Magnus lives? Everything relating to his powers and other people with abilities is always teeming with color. Rich reds, blues, and greens. I think this speaks to the excitement that his powers bring out in him, but also it’s a visual reference for the audience that reminds us when some action is about to pop off.

The story is set up in a way that it could really have some powerful commentary on coping with mental illness. Revolving around a person that could get into the heads of people with abilities they can’t control and guide them through it is a wonderful and fresh idea. But so far, this has only manifested in a physical way. I’d like to see some real emotional moments between Magnus and the people he touches.

Something that really stood out to me is that Astonisher reminds me of a few other comic book characters: Tony Stark, Booster Gold, and a little bit of Animal Man (Lemire’s run). I’m a firm believer that it’s impossible to come up with something completely new. It’s all about how you spin it that makes it unique, and Astonisher does that really well. 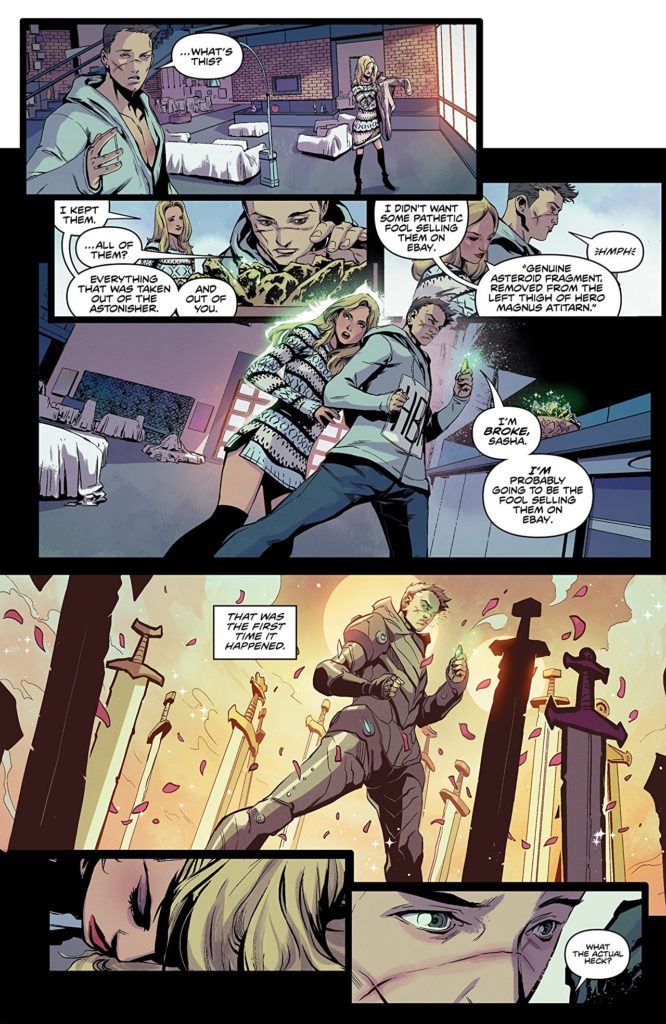 What Doesn’t Work For Me

The story has moved really fast in the first four issues. And the character development hasn’t been able to keep up. I feel like I don’t really know anyone yet. On top of that, I don’t like Magnus very much. I’m sure that’s kind of the point. But since I don’t know if he’s doing the right thing for the wrong reason, or the other way around, it makes it hard to root for him. I’m okay with either answer, I’d just like to know something definitive. But Volume 1 ended in a way where these things have the potential to grow as the series progresses.

What Astonisher lacks in racial diversity, it makes up for with its focus on mental disabilities. De Campi and Mhan have a book on their hands with the potential to say something important about these invisible issues that affect so many people on a daily basis. And if you dig that, go out and buy the book. If you don’t dig it, put someone else onto it that does. These types of stories need to be told. Issues like this need to be addressed so people can feel like they have something they relate to.

8.0 Gold Digging Russian Girlfriends out of 10