45 Shares
***While not a conventional recap for BNP as we discuss the impact of each episode, please note there are full spoilers for episode four, “The Streisand Effect” ***

William: Nicole, we have now witnessed 4 episodes of Atlanta and it might be my favorite 30-minute show on TV, considering I don’t watch too many 30-minute TV shows these days. It is funny (sometimes) and dramatic (mostly) and absolutely weird (always) in the way that the show Louie is, that came before it. Except, ya know, Black as hell. Starting with that opening scene behind the club, what part struck you most: Zan’s initial appearance or Darius’ “fuck it” attitude about it? I’m going with the confusion and ambiguity of Zan’s race and him dropping the N-bomb repeatedly, coupled with Paper Boi’s reaction. Like, he doesn’t think Zan is Black, but he can’t really deny Zan is Black if Zan says that he is. I thought it was a brilliant, yet brief commentary on the governance of language within the community. 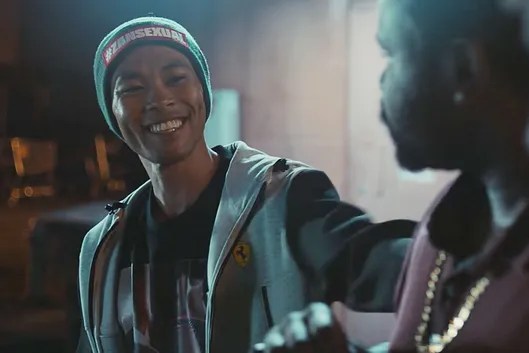 Nicole: Darius. Hands down Darius’ reaction was my favorite. He strolls up, Zan does that fake ingratiating gatekeeper thing that hangers-on do, and Darius is ready to do… something, but can’t resist the siren call of that free Zan hat. And then it’s Darius’s turn to get got for the ‘gram, (like Paper Boi did in episode 2 with the cop). And it’s not lost on me that Zan’s Instagram is ZanLivesMatter. (There is a real live account with that name on both IG and Twitter, but since the Twitter was started like yesterday I’m gonna say is fake which is lowkey disappointing.) For me the policing of language and construction of identity were so well handled that the 30 minutes flew by. Zan’s use of that word that doesn’t look like his is immediate and made me think back to the exchanges with Zack (is that his name?) in the first episode: who can say it and to whom is a study in how confidence is the only difference between inclusion and exclusion from the in-group
(if you have racial ambiguity on your side cause Zack was ’bout to get fucked up).

William: I know this is going to seem like the Darius appreciation show, but speaking of confidence, his demonstration of “facts” pertaining to Wilt Chamberlain and Genghis Khan is mesmerizing to me. Especially the Genghis Khan “he is why people are shorter now” anecdote. We all have that friend that says some truly ridiculous shit. But then he follows it up with a statement that is equally ridiculous but might be true, which if it were, would make the whole ridiculous statement believable. And Earn is basically in the role of the audience when he says, “is that really true?” Because it isn’t necessarily the skeptical questioning. It’s the moment where you have decided that you want to believe something, but need the last bit of validation to tip you over, even though it seem completely full of shit. And, so many points for the pawn shop owner’s Steve McQueen poster explanation. I laughed pretty loud on that.

Nicole: And poor, sad, non-threatening Earn. My dude said, “I wasn’t trying to rob you.” Aw. No, baby, no. No one thinks you’re trying to rob them. Which brings us full circle to why dude in first episode told him the R-rated version of the DJ story, but kept it G-rated when he told Paper Boi and Darius.

I didn’t expect to like the two completely divergent storylines in this episodes, but I ended up enjoying it because we got to see Darius in action. This is him in the leadership role. When he’s with Paper Boi, he’s the (not exactly) bumbling sidekick who handcuffs a briefcase to his wrist and loses the key. Here, he’s the guy plotting 4 moves ahead on a long-term investment while Earn is the uninformed sidekick. I enjoyed seeing that shift in the dynamic. Even if – especially if – it only lasts for this episode and then shifts to something else.

William: Well, I think this is a profound way of showing how Earn isn’t really ready to manage Paper Boi into a big star. His dreams are big, but his hustle is small time. His awareness might be worse. And as demonstrated over and over again, he doesn’t have the capacity to negotiate or maneuver from any point of strength. So that means that his instincts have to be top notch, and they just aren’t there.

[quote_left]Because it isn’t necessarily the skeptical questioning. Its the moment where you have decided that you want to believe something, but need the last bit of validation to tip you over, even though it seem completely full of shit.[/quote_left]Paper Boi’s storyline is just as fascinating. Zan is professional, unabashed, somewhat self-aware troll. And we all know that engaging trolls on any level almost never works out for the other guy. Two things I loved about it: 1) I am a sucker for a storyline that can go left on a dime. Watching them somewhat humanize Zan is an old tactic, but all the other machinations that happen once Paper Boi got in that car were surprising and unique. And 2) I love that the first scene we saw Paper Boi in, where he was, seemingly, murdering someone after the chestiest of bravado and bullshit. Ever since that moment, we’ve seen that he isn’t really that guy at all and is quite compassionate and sympathetic. He isn’t a fake gangster, he just hasn’t really bought into that persona, even if his most fervent fans demand it.

Nicole: Paper Boi so obviously has a soft spot for the kids – intervening with the toy gun and not punching Zan in the throat because of little man in the back. To me, Zan was a pretty heavy-handed critique of crafting identity online, something Glover has to be acutely aware of since he’s used social media to his advantage and then again in less crafted ways. Zan is an opportunistic infection and Paper Boi just can’t stop poking at it/him in part because he isn’t a fake gangster. As he says in the pool hall and in Zan’s car, this is his actual life: the drugs and the money and the music. Zan is attacking his brand. Even if we as viewers aren’t sure if he’s the killer that he might be, his fans do demand that of him and customers expect that of him. While trolls might ruin my breakfast as I’m scrolling through my feed, Paper Boi has dudes in masks showing up at his house so Zan’s unchecked trolling might actually cost him something real. Earn’s indifference to Zan’s sketches and posts, while sound advice, doesn’t acknowledge that the persona being attacked is the reason he has a couch to crash on. We haven’t seen anyone, not even his father, straight up tell Earn he’s wrong. He’s getting that special snowflake treatment. Paper Boi went against his impulse to let him be a manager because Earn got his song on the radio, but no one has like “Feed your fucking kid” so it’s easy for him to take moral high road. He risks nothing. William: So do we think that Paper Boi walked around to the back of the apartment to deal with the dude that stole the pizza, or do we think he simply walked out of the car and the situation as a whole?

So what are the odds that there will be a lady with a speaking part next episode? No, I’m not counting the women in the club in Zan’s post because I’m not that generous.

William: Ha! I think there will be, only because we haven’t seen Earn’s mom since what, the first episode? I think we’re due. I really, really like this show and I will say it has handled the level of masculinity well for 85% of the meaningful interactions being produced by men, but this is a thing can definitely weigh this show down without some more representation outside of the big three, preferably someone that isn’t just a foil for the main character like Vanessa has been presented as thus far.

Capping the episode, what were your thoughts about the journey and ultimately the destination with Darius and Earn? Just from a function of symbolism, I like how they started in Paper Boi’s very much interior Atlanta apartment and ended up in the country giving a dog to a White dude in the sticks.

[quote_right]While trolls might ruin my breakfast as I’m scrolling through my feed, Paper Boi has dudes in masks showing up at his house so Zan’s unchecked trolling might actually cost him something real.[/quote_right]Nicole: I like the emotional movement. We start with Earn being condescending to Darius with that “I thought AIDS was made by the government to kill homosexuals” comment and ending with him admitting that he was at rock bottom financially to Darius and Darius not only coming through for him, but stating “We’re friends now.” Now these aren’t two men connected only by their respective connections to Paper Boi.

William: Yeah, I loved the ending. Loved it. I don’t think it rearranges the pecking order, but it does do some perspective work as far as Earn is concerned. Hopefully, we’ll see him put some more effort, vision into what comes next. Any last thoughts on this episode before we wrap?

Nicole: This is counter-intuitive, but I hope we see Zan again. Which is to say, I hope there’s continuity to the story as a whole. I like these loose threads because I believe they’ll be picked up again so I hope this isn’t the last we see of him or of the critique of persona deconstruction that he represents.